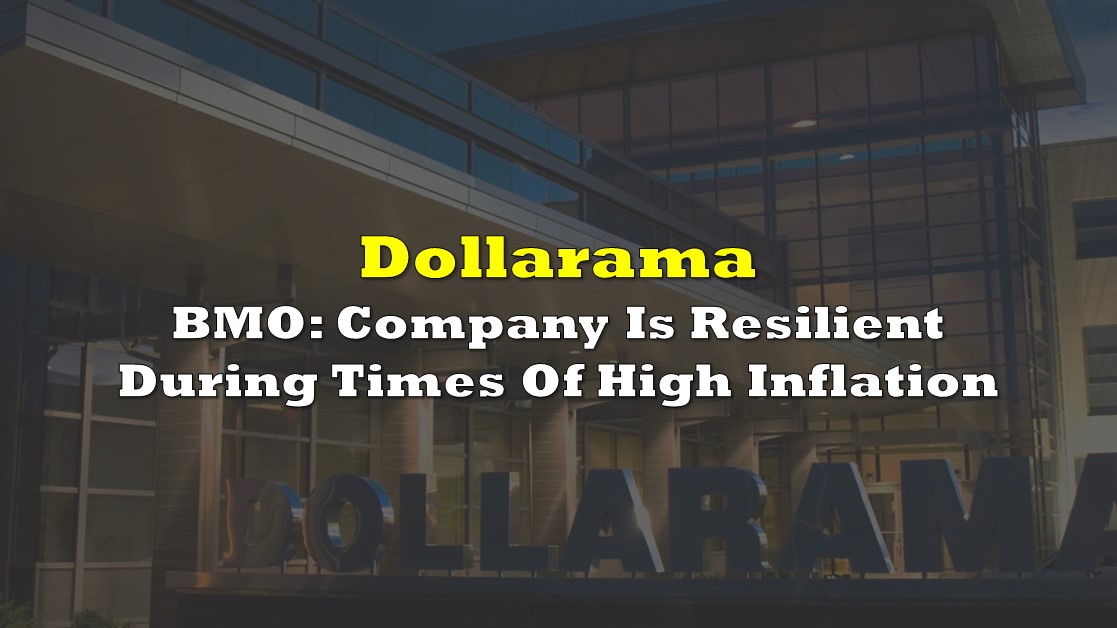 The company also reported its EBITDA grew 21% to $300 million, for a margin of 28% of sales. While diluted earnings per share were up 33%. Comparable store sales grew 7.3% year over year.

The company ended the quarter with $71.57 million and $646.7 million in inventory. Dollarama announced that they purchased 1,444,803 shares during the first quarter for total consideration of roughly $107.3 million under their normal course issuer bid.

In BMO Capital Markets’ note on the results, they reiterate their outperform rating and raise their 12-month price target from C$77 to C$80, saying that this quarter was strong and highlighting “Dollarama as a value destination.”

On the results, Dollarama beat BMO’s earnings per share by $0.03 while they highlight that Dollarama’s same-store sales growth has been the highest growth, even compared to quarters during the pandemic. Of the 7.3% growth, it was compromised of 14.4% growth in traffic while a 6.2% decline in transaction baskets.

BMO writes, “This strength in traffic may be highlighting the draw of Dollarama’s compelling customer proposition as customers seek value in overall increasing cost-of-living inflation.”

They also highlight Dollarama’s gross margins of 42.1%, which was in line with their estimate of 42%. A 0.15% decline year over year, they note that this is surprisingly strong mainly due to management’s cautious guidance and positioning heading into the quarter.

Management noted that there was 20-30bps of margin expansion during the quarter primarily due to lower logistics costs as a result of shipment delays. Management also talked a lot about wage pressures during the earnings call, which they indicated were higher but noted that it’s regional in nature.

Lastly, BMO says that this quarter highlights the idea that Dollarama is resilient during times of high inflation and that the company is “relatively better positioned versus other retailers to navigate through a period of inflation due to its unique structure and capabilities.”

The post BMO: Dollarama Is Resilient During Times Of High Inflation appeared first on the deep dive.