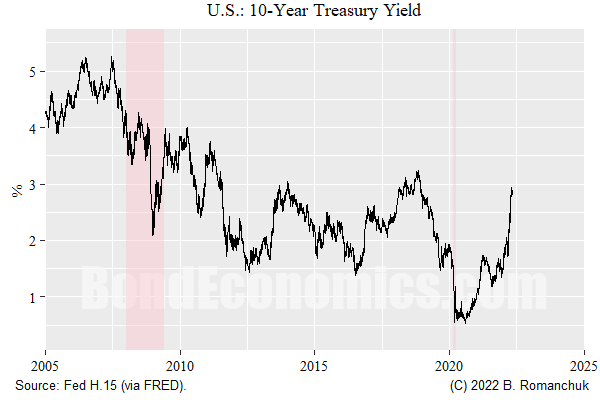 Market commentary I have been seeing has had an unusual split: warnings about the collapse of the bond market, as well as imminent recession. That combination would appear unlikely, given the usual reaction of central banks to recessions is to cut rates. However, it makes more sense if we accept that the United States and the rest of the developing world have diverging fortunes, as well as the reaction to the negative first quarter GDP print released last week.

The 10-year Treasury yield has vaulted towards the psychological 3% level as the market has moved to price in Fed rate hikes arriving at 50 basis points per meeting — despite the people like myself who were skeptical about such a reaction (oops). As I have noted in the past, moving to 50 basis point increments might allow the policy rate to regain levels of previous cycle — instead of the post-1990 pattern of the policy rate peaking at lower levels. The implicit theoretical point is that the level of rates is less important than conventional belief — the faster rate hike pace allows a higher peak rate for the same time interval. 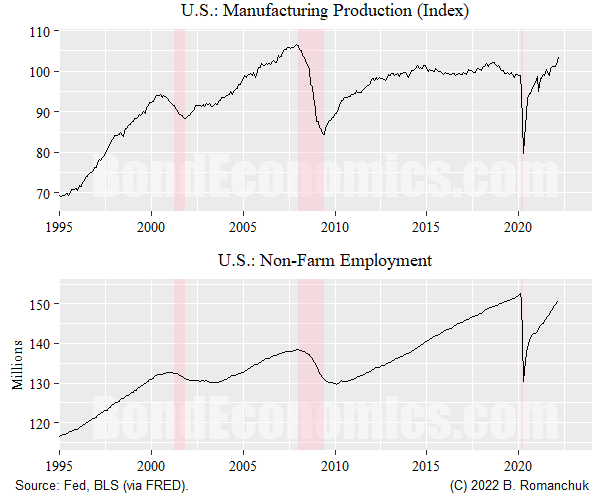 The preliminary report for U.S. Q1 real GDP was released last week, which registered an annualised decline of -1.4% . Weakness showed up in net exports and inventories. This led to a certain amount of commentary along the lines that “we are already in recession.” Although I can easily imagine a recession developing due to the various global shocks, there is not a lot of data corroborating an immediate recession call.

Two key monthly indicators — manufacturing production and non-farm employment are not showing weakness (yet). Admittedly, there is the risk of revisions, but it should be noted that the initial GDP report is extremely preliminary, and GDP series are heavily revised (as more data is added, then as a result of methodology changes).

I discuss recession definitions in Chapter 1 of Recessions: Volume I. Many people are familiar with the simple definition of a recession being two consecutive quarters of real GDP contraction. (It needs to be real GDP, since a decent inflation rate would insure that nominal GDP does not contract, even if real GDP is shrinking.) However, that is not the definition used in the United States: there is a business cycle dating committee at the National Bureau Economic Research (NBER) that puts dates on expansions/contractions. (Link to their description.)

I will briefly attempt to summarise their description as that they look at a variety of data series in order to put dates on expansions and contractions. Their decisions come with a lag — it is not unheard of for the NBER to declare a recession after the recession is over. Other countries have their own business cycle dating committees, although most are not as “official” as the NBER.

Returning to the current situation, we could imagine a very hypothetical situation where another quirky quarter in GDP results in another contraction, while activity as measured by employment, industrial production, etc. continue to expand. In this case, it seems unlikely that the NBER would view that as a recession. That said, it would be difficult for data to diverge in this fashion two quarters in a row.

Although there are some sectoral issues in the United States (inventory build, over-expansion of trucking), it is unclear that they would be enough to drive businesses to cut hiring. The more plausible source of weakness is international contagion from countries hit harder by the commodity price spike, as well as financial market jitters.

The largest plausible shock would be the cut off of Russian natural gas supplies to Western Europe. This seems unlikely, but given the erratic nature of Russian diplomacy, nothing can be ruled out completely.

An immediate end to the war now seems unlikely. This means that commodity outflows from the Black Sea will remain extremely limited, and sanctions will remain. However, it appears possible that trade flows have already adapted to this new reality. As such, the United States and Canada might be able to side-step a European recession courtesy of North America being a grains and natural gas exporter.

The Russian offensive has failed to make any tangible progress, and so the war will revert to the Ukrainians methodically dismantling Russian command points, logistics, and artillery using their new weaponry that out-range Russian fire. This would be a re-play of the Russian failure near Kyiv, where the ground forces were bled white ahead of a retreat. Any adjustments by the Russians (e.g., mobilisation) will be too slow to affect the balance of combat power this summer, and thus the Ukrainians have time to reduce Russian combat power ahead of their expected counter-attacks. It seems likely that those counter-attacks will need to occur in order for serious peace negotiations to start.

If we only looked at inflation, it would be very easy to be concerned about the relatively low level of bond yields. The counter-point is the considerable uncertainty in the global economy, which could make its way to North American business confidence. Once again, I am not a forecaster, but I find it hard to disagree with what appears to be the consensus view that the North American economy can squeak through due to its relative insulation from commodity price shocks.