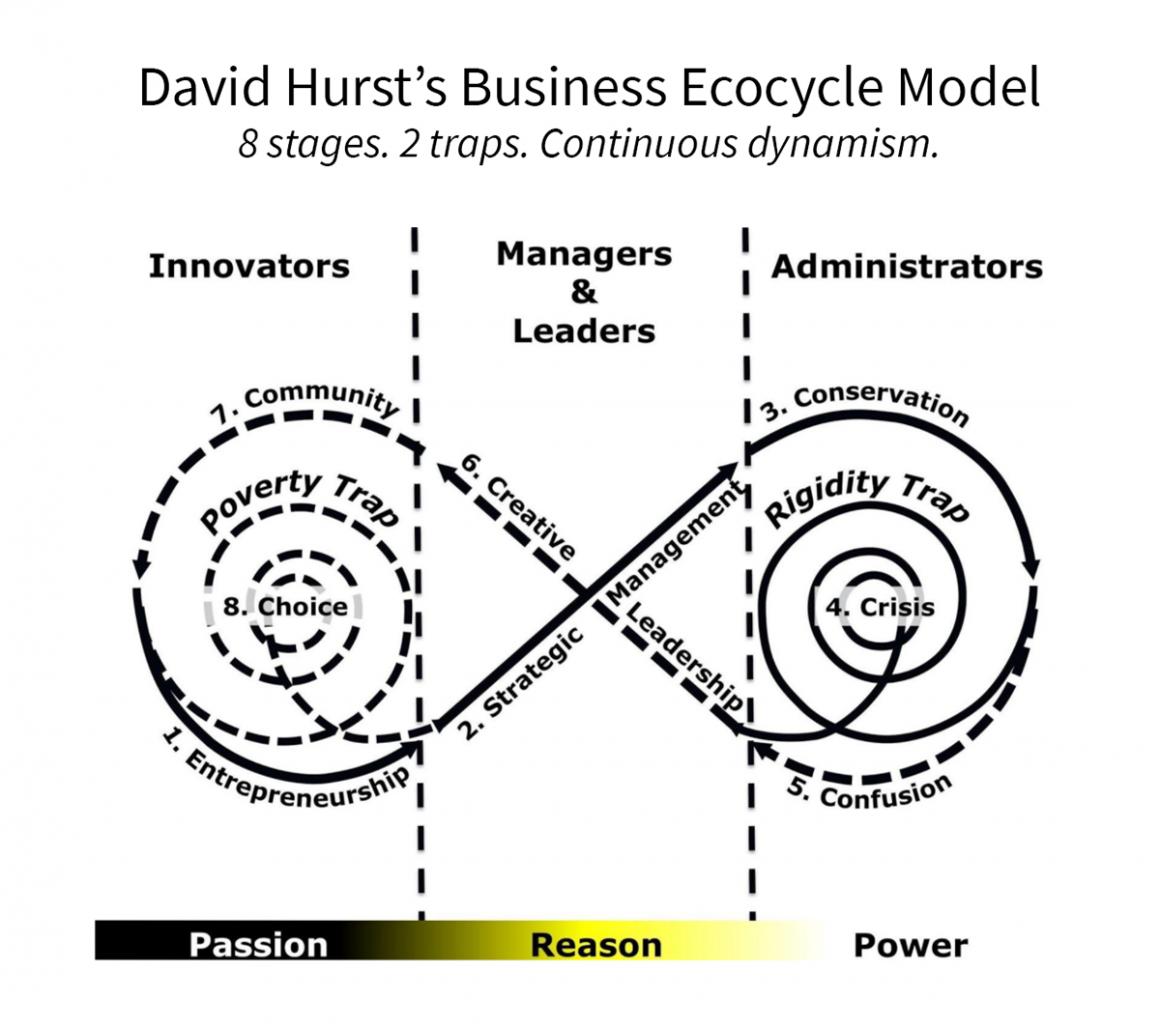 At E4E, we believe that Austrian economics can guide business execs and entrepreneurs to better thinking about how to manage businesses that thrive. Business educator David K. Hurst blames neoclassical, Chicago school economics for the bad thinking that pervades business today. Here’s how he phrased it in our @e4epod Episode #82:

I emerged from Chicago believing, or at least accepting, the basic assumptions which lay behind business education at that time, which was heavily influenced by what I came to understand was neoclassical economics. That is, it believed in greed as the primary motivation. It was all about individual self-interest and utility maximization, I think, was the word. It was heavily rationalistic in that it believes that we ought to behave like little mini scientists with everything based on evidence and data and then lastly, the focus was very much on equilibrium, that markets were self-equilibrating and that the natural condition in organizations was stable. Stability was the norm and change was something that you had to manage and that if things went awry, it was mainly because you weren’t following standard procedures. Management was essentially about allocating resources… It was nothing about innovation… and making sure things ran in a steady, linear, rational fashion.

When I got into the real world, I found that these principles were, well, wrong.

The right principles are those that Jesus Huerta de Soto includes in his Austrian theory of dynamic efficiency. David Hurst sums them up this way:

Of course the linear, stable, rational model is the way academics think businesses ought to run, if only they would listen to them, and the fact you can’t run them that way because the world is nonlinear. It’s dynamic.

Spontaneously, individuals on the front line formed small teams (they’d be called Agile today) to hunt down innovative and collaborative solutions to this and other challenges that arose. They were non-hierarchical, with no process manual, no reporting structure and no fixed operating plan.

Similar small, collaborative, horizontal teams multiplied to solve problems of business recapitalization, debt and cash flow management, innovation, pricing and many more. The business, after divesting unproductive divisions and products, became profitable, grew and thrived. There was improvement and it was, as David put it, non-linear.

David reflected on this experience and developed a theory to explain it. He observed that, in the dynamic crisis time, traditional hierarchy and procedure had faded into the background, and the spontaneous order of agile teams had taken the foreground. Both continued to exist.

I called them boxes and bubbles, boxes being the formal box structure which productive, large-scale organizations end up using, and bubbles were these soft, informal teams that we formed at a moment’s notice. They formed easy coalitions with each other and when they did the job, they burst. They disappeared and went back into the mixture out of which new bubbles could come.

The Theory Of Complex Systems

Applying complexity theory, David developed what he calls an organic approach to business management, modeled after natural ecosystems, such as a forest. Forests start off as weeds — small and fast — and end up as big and slow trees. Yet forests are dynamic: they renew themselves through fire, burning the obsolete, decadent growth to create the space into which new growth can come. At that stage, the forest starts to build a new community of fresh growth. It continues in an infinite loop, existing for indefinite periods of time.

Austrian theory, of course, embraces the idea of complex systems. We know that any economic endeavor, any market, and any firm operates within a complex system of millions and billions of provider-customer exchanges, governed by the idiosyncratic subjective value scales of consumers and the entrepreneurs who strive to empathize with them and serve them. We know that these complex systems can’t be managed in any traditional, hierarchical, procedures-manual sense, and they can’t be predicted. We understand business cycles and adaptive behavior.

How Did Business Schools Come to Teach The Wrong Model?

How did the business schools get to teach their totally inadequate model?

They adopted this model in the late 1950s. Their goal was to come up with systems to produce economies of scale, how to produce more of the same. Like the steel business – very inefficient, highly polluting but facing tremendous demand for steel for rebuilding the world in the 1950s and there was no reason to change.

The theory that emerged was how to perpetuate this success. But nothing lasts unless it is incessantly renewed. Firms must innovate to maintain dynamic competitiveness. The organizational structure required to run something with economies of scale, a very mechanical, machine-like, productive hierarchy, is very poor at innovation because those are exactly the dynamics that you’ve got rid of in the pursuit of efficiency, in the pursuit of low prices.

The theory that businesspeople used to support them in this productive model was of course neoclassical economics. It appealed to them to explain why it was all about rationality and it was all about stability, keeping things the same.

The Uses of Knowledge

David tells us that Hayek became his guide.

It seemed to me that The Fatal Conceit applied to the corporate world, the mini socialist structures. I mean, when I graduated from business school, the Fortune 500 were the sort of last refuges of Stalinist bureaucracy. They were central planners, so Hayek’s critique applied to them. That’s the way they work. People at the top were dictators, that’s the word for it.

Businesses fall into what David refers to as a “power trap”, bureaucratic and rigid.

The boss would come and say, “Well, I want to do this deal so find me some assumptions that make it work.” Instead of getting evidence-driven strategy, you got strategy-driven evidence. It was totally inverted. The process was actually a process of power, and the structures are structures of power. It ends up with elites”.

The Organic Approach to Management

David described working with an entrepreneur in South Africa.

He was Austrian, but not an economist. He was a tool and die maker in Austria and he had come out to South Africa and he had set up a tool and die business to make fuel tanks for the automotive industry in South Africa. This guy was a wizard on the technology of stamping. It was just know-how, practical knowledge.

He wasn’t dealing in abstractions at all. It was all about practice and things emerged on the shop floor, “Oops. Okay, so that’s interesting.” He was continually experimenting, tinkering, and he was hugely successful because he had this extremely efficient, effective process. And he was not intellectual in the remotest. If you tried to ask him, “What principles are you operating by?” he wouldn’t be able to tell you and that was okay. It’s the power of practice and that the actions come first, and the words come later.

The way you come out of business school is thinking about the job of management like an engineer. You had this machine which required to be maintained, lubricated, fixed, parts replaced sometimes, but it was essentially a machine, a smooth running machine, and you think like an engineer.

I see the manager as a gardener. A gardener has engineering aspects, but they also have wilder aspects to them. The gardener creates the conditions in which, in the case of enterprises, people can grow. They grow people. That’s what it’s all about. I see this gardener as the one being able to conduct this dance. You need to dig up soil and replace it. You may need to tear down existing plants and put them on a bonfire and burn them, break out the chainsaw and saw. At other times, you need to supply structure, a lattice on which they can be trained and pruned and all that kind of stuff. The gardener seemed, to me, to capture this duality to the manager’s task.

The things that really matter are the unmeasurables that refer to the future.” The example he gives is the ability of the enterprise to attract young, high motivated people. He said, “If you can’t attract these people, eventually it’ll show up in the numbers, but it’s not something you’ll see in the numbers right now because it hasn’t happened yet. It’s straws in the wind.

How do you measure unmeasurables? Through Hayekian knowledge theory: getting everybody in the organization talking to each other about what’s happening, about what they’re seeing every day, because that’s where it’s happening, on the ground. This is all a part of acting our way into better ways of thinking, getting ideas, seeing the opportunities emerge out of what we’re doing, out of the action.