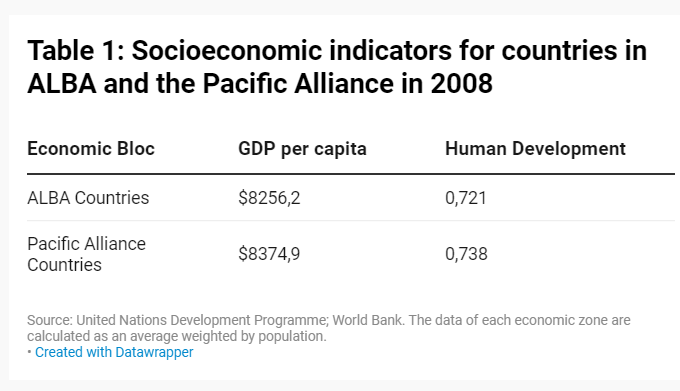 It is very difficult to conduct social science experiments, particularly in economics. Beyond some developments in experimental economics that involve lab tests, conducting economic experiments is practically impossible, especially for macro issues. However, fortunately, historical developments provide us with some natural experiments from time to time.

Perhaps the most surprising recent example of a natural experiment is the economic development of Hong Kong, Taiwan, and Macao, as compared to continental China’s economic development since 1949.1 This historical example allows us to contrast, within one culture and for economies with the same or similar initial conditions, the effects of a policy of total economic control with the effects of economic liberalization. As the reader already knows, the economic effects of communism were devastating in continental China, whereas the effects of economic liberalization in Hong Kong, Taiwan, and Macao were positive.

This article will discuss a natural experiment, similar to the aforementioned example, that has been taking place for years in Latin America. For more than a decade, a leftist interstate coalition has been forming under Venezuelan leadership. In a similar period, a rightist liberal political coalition has formed, with leadership shared among several countries.

The two economic blocs this article will investigate are the Bolivarian Alliance for the Peoples of Our America–Peoples’ Trade Treaty (ALBA) and the Pacific Alliance. The countries that make up these economic blocs are these:2

The two economic blocs are Latin American. Accordingly, culture is not a significant variable.

Additionally, the trade blocs began with a similar standard of living and income per capita, so the initial conditions do not have a significant influence on the final result.

Below we can see that in 2008 (the beginning of the period of analysis), the two economic blocs had very similar socioeconomic indexes. Both GDP per capita and the Human Development Index were at very similar levels.

The difference in economic performance between the zones is therefore due to the policies implemented in each bloc. This is a natural experiment in which countries are separated into similar groups and a different treatment is applied (in this case a different economic policy). Let’s look at the main policies promoted by each of the blocs.

The Economic Vision of ALBA: An In-Depth Analysis of Socialism

ALBA was created in 2004. Its headquarters are in Venezuela, and its main driving force has been the Venezuelan government. The large countries that have been part of this initiative have been primarily those that have self-identified as socialist of a twenty-first-century variety.3

Since its creation, this trade bloc has sought to challenge “traditional” free trade agreements. It was founded to counter the principal proposal of the time, which was to create the Free Trade Area of the Americas (the FTAA, or, in Spanish, ALCA):

Peoples’ Trade Agreements are instruments of solidarity and complementary trade between countries intended to benefit the people as opposed to free trade agreements that seek to increase the power and dominance of transnational corporations.4

As the main means of economic integration and trade, ALBA proposes to create “great national” companies as opposed to the transnational corporations of a capitalist system. Great national companies are publicly owned, and various ALBA countries can participate in them. The objective of these public companies is to gear their production primarily toward trade with other ALBA countries.5

ALBA countries encourage fair trade through so-called fair prices. In this framework, the price of an item sold by one member to another has nothing to do with a market price, but is rather a price that has been politically determined.

ALBA’s ultimate objective is for trade to be conducted exclusively between ALBA nations. This resembles the trade between socialist countries in the twentieth century. Hugo Chávez himself defined ALBA as socialist in 2010:

The goal is independence; the path, revolution; and the flag, socialism. ALBA is, therefore, that: Independence, Revolution, and Socialism.6

The failure of this economic bloc is demonstrated not only by the statistics presented below, but also by the fact that countries currently do not want to be part of ALBA. Ecuador left ALBA in August 2018 and is taking steps to join the Pacific Alliance. Bolivia, for its part, left ALBA in November 2019. The only large countries that remain in ALBA as of 2020 are Cuba, Nicaragua, and Venezuela.7

The Economic Vision of the Pacific Alliance: An In-Depth Analysis of the Free Market

The Pacific Alliance is, essentially, a trade bloc with ideals based on free trade. This is evidenced by the fact that only four years after its creation in 2016, its member countries have eliminated tariffs on 92 percent of their products.8

Although the Pacific Alliance did not begin until 2011 (2012, formally), the member countries had a history of collaboration:

In addition to both the drastic reduction of tariffs involved in the de facto creation of a single market among the four countries and the creation of an integrated stock market, the Pacific Alliance has promoted a series of measures aimed at expanding free trade among its members:

The Pacific Alliance’s goal is for trade between the member countries to develop regionally and with countries outside the alliance. It places special emphasis on countries located on the other side of the Pacific Ocean. Of course, this trade is conducted by private companies. This contrasts sharply with ALBA’s vision, in which trade is conducted by countries (via state-owned companies) and priority is always given to regional trade over trade with other parts of the world.

The success of the Pacific Alliance is evidenced by the number of countries that have requested to become a member and by the data presented below. Currently, forty-nine countries are part of the alliance as observer states, many of which aim to become full members. One such country is Guatemala.

Next we will analyze the merits and flaws of each economic bloc.

The period under analysis begins in 2008. It would perhaps be better to use 2007 as the beginning of the period for ALBA, as Nicaragua joined ALBA in 2007 and the first “great national” companies were also created in 2007.9 As for the Pacific Alliance, the agreement was written in 2011 and implemented in 2012. However, economic integration in Pacific Alliance countries was already quite advanced by then. For example, there were prior free trade agreements between four of the countries and the stock markets had already been integrated since 2009, as mentioned above. Therefore we chose 2008 for this analysis. We could have chosen either 2007 or 2009 instead, and both would have been equally valid. In either case, the final results would have been very similar.

Let us begin by analyzing economic growth. From 2008 to 2013, GDP in both economic blocs grew very similarly. One can even see that the Great Recession in 2009 affected the countries in the Pacific Alliance more. In 2014 the raw materials crisis took place and affected Latin American economies significantly. However, one can see below how the Pacific Alliance countries were able to manage the negative impact on commodities relatively well, while the ALBA countries dipped and continue to experience a severe economic crisis to this day. 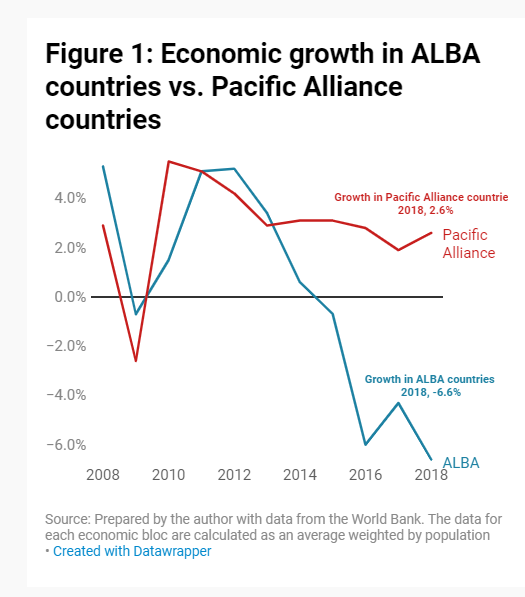 It seems that the ALBA countries performed relatively well while the commodity prices were temporarily high. Once these prices fell, the region fell into a severe crisis that is still devastating several of these economies. The Pacific Alliance countries have managed to maintain their economic growth despite the swings in prices of raw materials.

The data for GDP per capita reveal an even more surprising contrast between the economic performance of the ALBA countries and the Pacific Alliance countries. 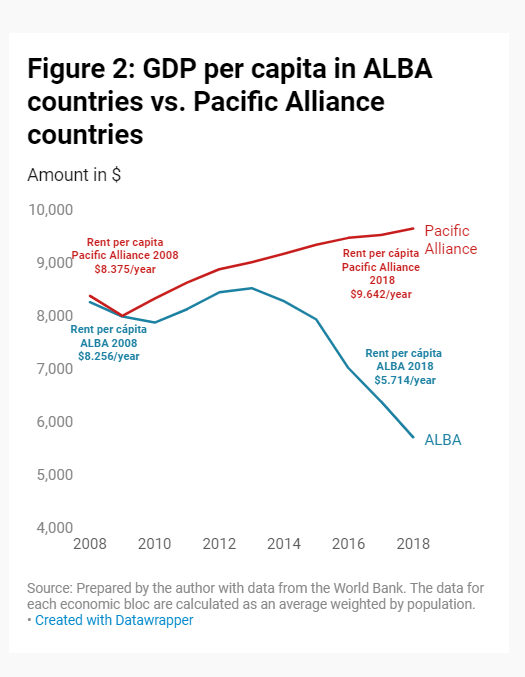 It is clear that the two economic blocs began the period with an almost identical GDP per capita. The countries that liberalized their economies (those in the Pacific Alliance) saw their GDP grow gradually, while the GDP in countries that continued to experiment with twenty-first-century socialism (the ALBA countries) fell drastically starting in 2013.

The final measure to be analyzed is the countries’ changes in the Human Development Index published by the United Nations. 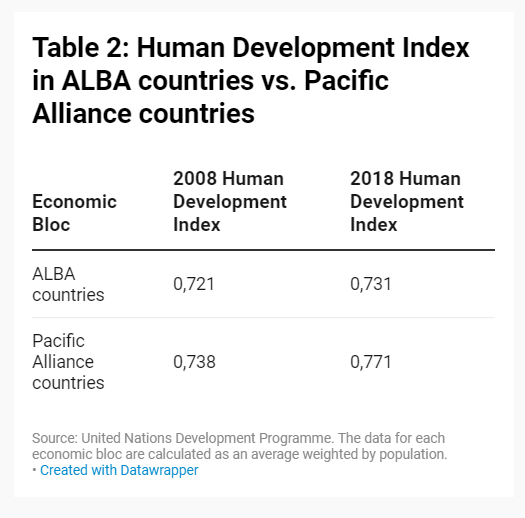 The increase in the Human Development Index is far greater in the countries that liberalized their economies (Pacific Alliance) than those that have controlled their economies (ALBA). This is especially interesting if one takes into account the fact that the ALBA countries developed a joint public policy, within the framework of the treaty, for eradicating illiteracy.10 The illiteracy rate is a key indicator in the Human Development Index.

The natural experiment in Latin America seems to have come to an end, as ALBA is currently in the process of dissolving. This experiment leads us to conclude that not all trade blocs are equally successful. The economic blocs that promote trade in the private sector and include economic liberalization function like clockwork. In stark contrast, the economic blocs that promote trade between states through state-owned companies and that are characterized by centralized control of the economy are destined to fail.

The main problem with these economic experiments, although they are fun for economic analyses, is that they have devastating consequences for the lives of millions of people.

Guatemala is already part of the Pacific Alliance as an observer. Perhaps this is a perfect time for the authorities to initiate the process of making the country a full member.