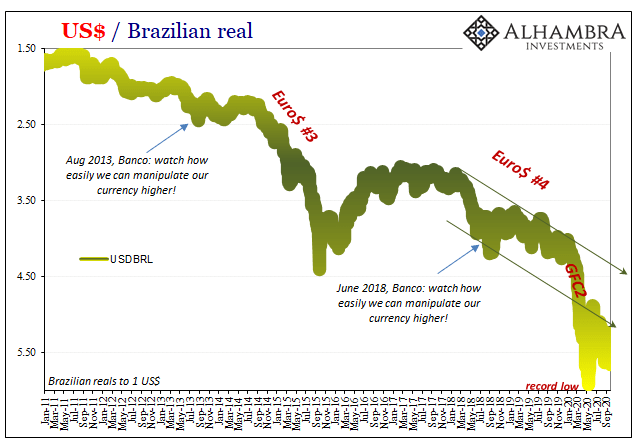 Back in early June 2018, the Brazilian real was in free-fall (again). Never bothering to explain why or what was happening, the country’s top central banker just gathered the media together in front of him confident in how what he’d say to its members would be reported as fact. As it was. Not just by Brazil’s press, either.

Even if what he did say, reading between the lines, was how you, me, and everyone else around the world must be stupid.

Yep, stupid. I wrote the very next day:

Yesterday afternoon, Ilan Goldfajn, Banco do Brasil’s President, hastily arranged a press conference to defend the country’s collapsing currency. Kind of. He declared quite confidently that Brazil’s central bank had more than enough FX swap capacity and dollar reserves to do whatever he might like with the real.

The ironically named Mr. Goldfajn didn’t address the elephant in the room, of course, nor did he have to as the mainstream just ate it up like always.

The elephant is the eurodollar system, though I doubt Goldfajn knows much about it. His ignorance had crossed the line into insanity long ago (see below). For one thing, his predecessor had done the exact same thing just five years before. 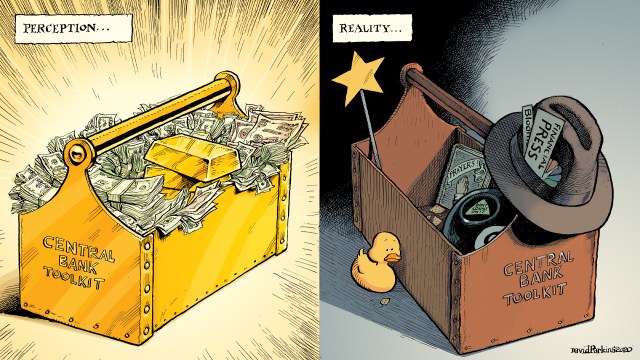 Knowing full well the media wouldn’t question any of these assumptions (they didn’t) doesn’t really amount to a real monetary policy. Expectations nonsense, sure, therefore consistent with the conventional textbook each and every one of these central bankers continues to use no matter how overtly ridiculous – and dangerous. They’re real toolkit.

As I keep pointing out, these are not serious people. They do play them on TV.

And that brings us to the home stretch for 2020. The dollar’s reported crash has been put on hold for now – meaning, of course, the euro shifted and so must’ve the headlines.

Underneath and apart from Europe’s currency, however, it’s been a different situation. Very different. I keep writing how the dollar isn’t even falling, and people keep telling me it is.

Would The Real Dollar Please Stand Up

Let’s be perfectly clear – what I mean by “falling” is a “weak” dollar being moved lower in clear and broad fashion by reflation tendencies in the eurodollar system. Short version: greater “dollar” supply, actual falling dollar. Restricted supply, the eurodollar squeeze: rising or stubbornly high dollar value especially against (eurodollar) more vulnerable benchmark currencies like Brazil’s (and other EMs).

Yes, the dollar’s exchange value is down against most if not every currency since its most extreme in March/April.

Drifting downward after a major crisis extreme isn’t that. On the contrary, this opens up the same global dollar shortage kinds of questions. 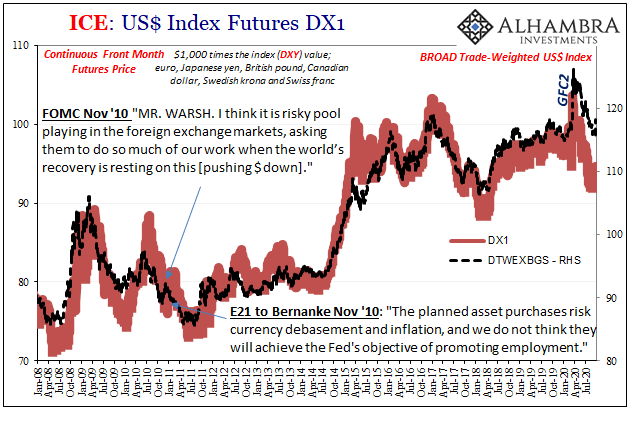 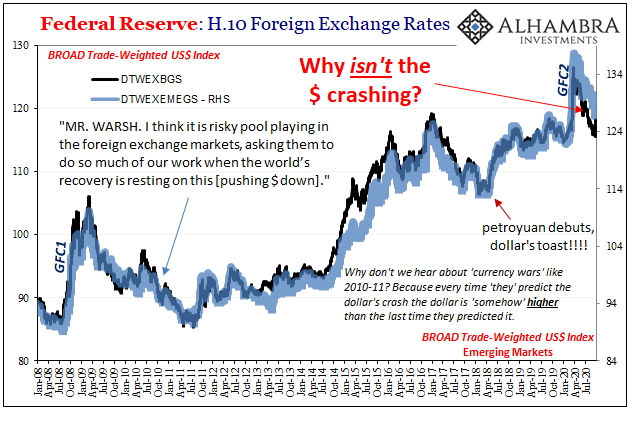 Why isn’t it down a whole lot more (even DXY)? To me, this has been an enormous difference, one that should give people a whole lot more pause about what’s taken place the past six months or so (see: bond yields). Against the most obvious eurodollar-susceptible currencies, though nominally lower compared to the top, this dollar has held up unusually “strong” in the face of what we were told had been epic countermeasures.

Forget crash, this directly refutes everything Jay Powell has been saying (along with his cronies worldwide).

Beginning with Brazil’s first, we can start to piece together what’s really been going on here and applying small variations to individual situations. Not a flood of liquidity or anything else. Instead, as I wrote on June 3, survivors’ euphoria alone sure seems to have been responsible for at least the real’s downtrend. Conspicuously limited downtrend.

What was this survivor business?

We are in the window of euphoria again. Having, seemingly, survived the shutdown as well as the market events of March 2020 there’s no other feeling quite like it. The whole world has turned a corner, and increasingly the data shows that’s just what happened…April, maybe early May, that was the worst; that had been the bottom. We’ve made it through to the other side! No second wave of COVID-19. No more stock market routs. Not even a Bear Stearns this time. We’ve been scared out of our minds by all this horrible news in the media…and that’s it? Not one crummy Wall Street bank?

And Jay Powell, man. Did he ever come through!

You couldn’t have made a better theoretical reflation dollar case to that point. But here’s the real point, and the real’s point; since a few days after I wrote those words, Brazil’s currency against the dollar has renewed its downtrend. The real, not the dollar. Banco’s “swaps” and all.

Like Japan’s yen, in my analysis, this Brazilian behavior is a key indication; therefore, unlike the euro, actually meaningful. Going back to early June, there had remained unanswered questions behind the ecstasy. 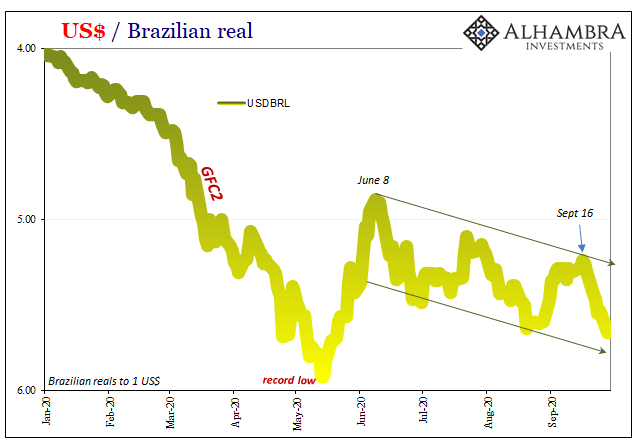 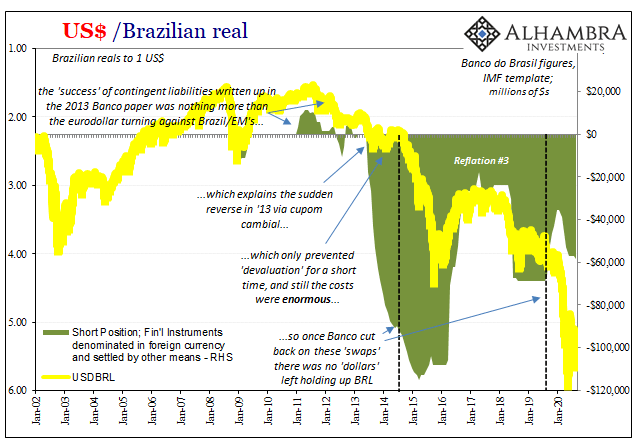 But, like 2008, ask yourself if the economy and the monetary system really have made it through this ordeal unscathed? Not in the media sort of way, where central bankers are never criticized and their word taken as the new gold standard. Unemployment. Bankruptcies. Dollar shortage. Have those critical issues really been handled and solved, or is it simply another matter of timing and confirmation bias?

You see, that’s the dollar I see. Survivor’s euphoria but then lack of follow-through; slowly churning back toward the other direction, the wrong direction which answers the question above in the negative. People got happy it wasn’t 1931 in March, and then after a few weeks the raw euphoria began to fade leaving for serious people, at least, more and more sober, and sobering, assessments.

Against key currencies, the dollar hadn’t really moved and for months on end it’s been moving the opposite way. Over the past few weeks, more currencies have joined.

And you should be constantly asking yourself, why? Something’s missing. Jay did a whole bunch of things. He’s still doing a whole bunch of things. In addition, there was that huge, massive deal on average inflation targeting, too. Money printing out the wazoo and a structural change in the Fed’s methods. What more could a central banker possibly offer?

In the fevered mind of monetary authorities, absolutely nothing.

Looking at the dollar, its real condition (pun intended), how about, you know, some actual dollars for once instead of all this puppet show theater. 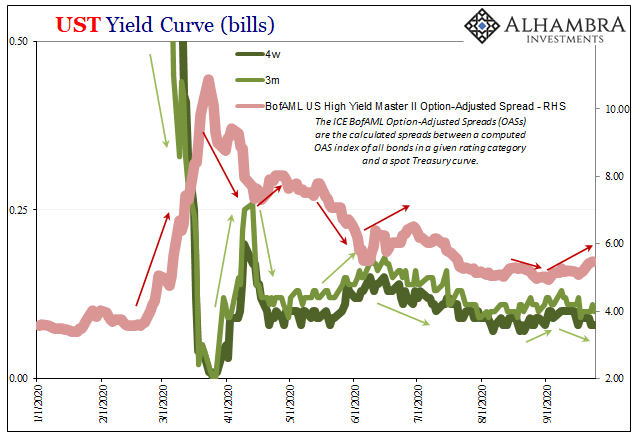