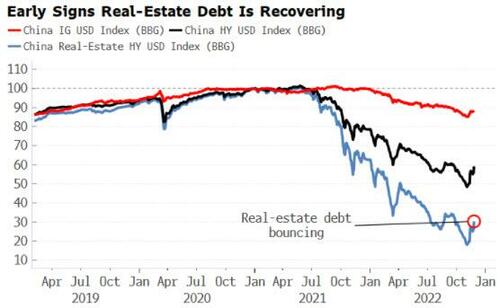 China’s risk of slipping into “debt deflation” will be the longer-term driver of its asset markets even after the country finally manages to exit its Covid Zero policy. A much weaker yuan remains likely as one of the tools to alleviate the problem.

China’s stocks and the yuan bounced today after the government said it would ramp up vaccination among its elderly population and avoid excessive virus restrictions.

Furthermore, more property easing measures were announced, with the removal of restrictions for builders to issue shares. This adds to 16 targeted easing measures for the property market announced earlier this month. The debt of property companies, which had slumped by 80%, has rallied over 50% off the lows.

Still, this will not be enough on its own to resolve China’s longstanding debt problem, and the risk that the country sinks into debt deflation. The essence of debt deflation (see diagram below) is when the value of assets and the income from these assets declines in relation to the value of liabilities, meaning the debt becomes increasingly difficult to service and pay back, leading to slower growth and ultimately deflation.

The property downturn is a particular problem for China as local government debt – of which there is an estimated $8 trillion of outstanding, half of China’s GDP – is often collateralized by land values. Falling land values increase the chance of collateral calls, leading to the distressed sale of other assets, adding to deflationary dynamic.

China saw the largest rise in private debt since 2010 of any country in the world, with the private-debt-to-GDP ratio rising a dizzying 90 percentage points.

The BIS notes that DSRs of 20%-25% have preceded financial crises in other countries. Hong Kong’s DSR is even worse at over 30%.

One increasingly likely lever China will pull (and has been pulling) to ease the debt problem is allowing the yuan to weaken, and perhaps eventually dropping the fixed-rate exchange system altogether. Property easing measures and an eventual exit from Covid restrictions will help, but the debt problem is not going away.