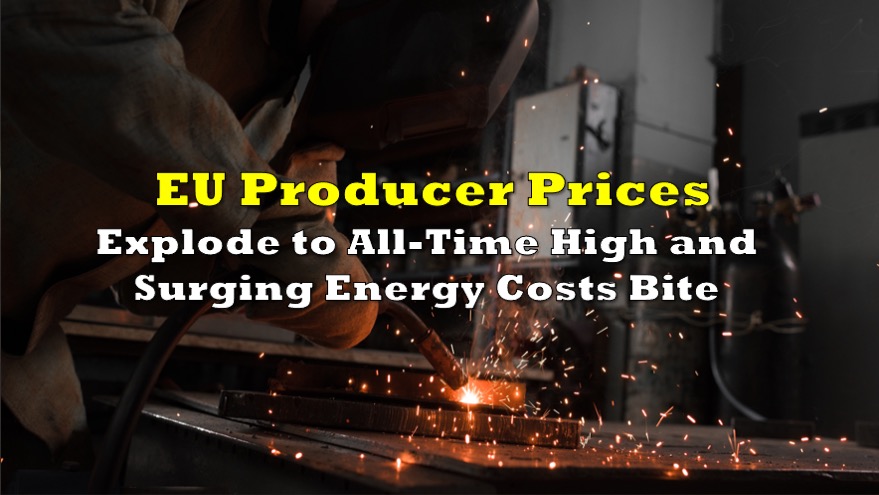 For the eighth month in a row, producer prices across Europe continued to skyrocket, largely fuelled by surging energy costs.

Latest data from Eurostat showed industrial producer prices jumped 5.4% month-over-month in March, compared to a 1.1% increase in February. Firms in the euro area, meanwhile, reported a 5.3% rise in prices from the month before. Compared to the same period one year ago, though, the producer price index was up by a staggering 36.5% and 36.8% in the EU and the euro zone, respectively, marking the sharpest and highest increase on the series records.

EU firms in the energy sector reported an 11.6% monthly increase in producer prices, and a jaw-dropping 101.3% increase compared to March 2021. Industrial producer prices for intermediate goods were up 22.8% from one year ago, while non-durable and durable consumer goods rose 9.5% and 8.4%, respectively.

The latest surge in prices comes at an ill time for European consumers, whom are simultaneously battling some of the highest prices on record. Separate data from Eurostat showed annual inflation hit 7.8% for the EU region, and 7.5% for the Euro area in April— the highest on record. Energy prices were the main culprit behind last month’s eye water print, still exploding 38% from April 2021 despite a slight pullback from March’s annual increase of 44.4%.

“The hoped-for slight easing of inflationary pressure, which seemed tangible in view of the fall in petrol prices, once again failed to materialize,” said LBBW bank analyst Elmar Voelker, as cited by Reuters.

Information for this briefing was found via Eurostat and Reuters. The author has no securities or affiliations related to this organization. Not a recommendation to buy or sell. Always do additional research and consult a professional before purchasing a security. The author holds no licenses.