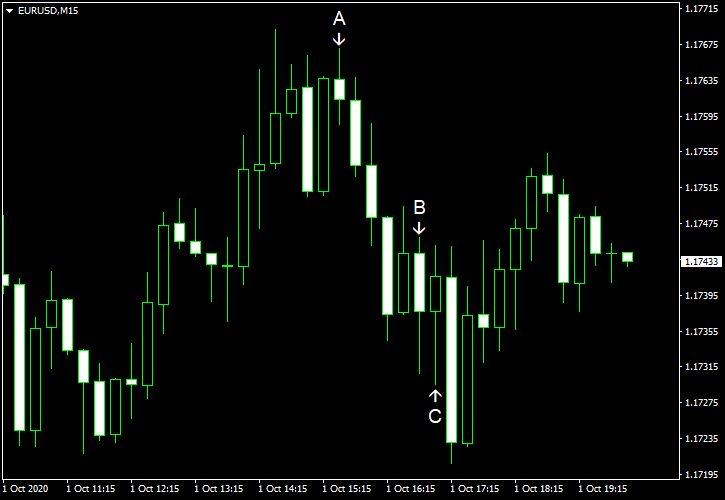 EUR/USD rose today amid mild risk appetite on markets but the rally was not big, and the currency pair has lost part of its gains by now. US macroeconomic data released on Thursday was mixed, with some reports beating expectations, while others missing them.

Personal income dropped by 2.7% in August, exceeding the forecast decrease of 2.0%, after rising by 0.5% in the previous month. Personal spending rose by 1.0%, beating the median forecast of a 0.7% increase. The previous month’s gain got a negative revision from 1.9% to 1.5%. Core PCE inflation was at 0.3%, matching expectations, slowing slightly from the previous month’s revised level of 0.4%. (Event A on the chart.)

Initial jobless claims were at a seasonally adjusted level of 837k last week, down from the previous week’s revised level of 873k, falling below the forecast value of 850k. (Event A on the chart.)

Markit manufacturing PMI was at 53.2 in September according to the final estimate, almost unchanged from the August figure of 53.1. Market participants were expecting the same 53.5 reading as in the preliminary estimate. (Event B on the chart.)

ISM manufacturing PMI fell to 55.4% in September from 56.0% in August, whereas markets were not expecting any change. (Event C on the chart.)

Construction spending rose by 1.4% in August, beating the average forecast of a 0.8% increase. The previous month’s increase got a significant positive revision from 0.1% to 0.7%. (Event C on the chart.)