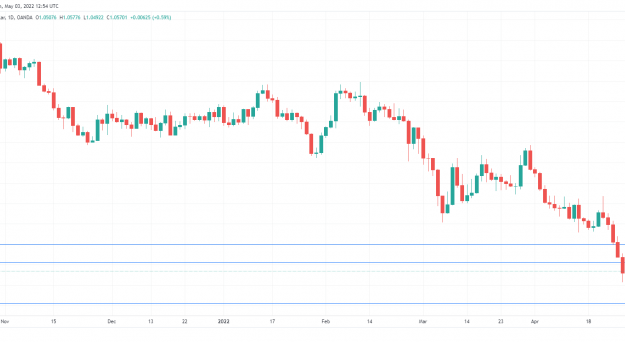 The euro is in positive territory on Wednesday. EUR/USD is trading at 1.0568 in the European session, up 0.57% on the day.

All eyes are on the Fed, which is expected to raise rates by a half-point, which would be the largest rate hike in 20 years. Fed Chair Powell and other FOMC members have been telegraphing their newfound hawkishness to the markets and receive full marks for being transparent, assuming that there are no last-minute surprises. There have been calls for a massive 0.75% rate, which is unlikely. Still, the mere fact that such massive increases are being suggested indicates just how badly the Fed miscalculated inflation and has fallen behind on the inflation curve.

We are likely to see additional 0.50% hikes in upcoming meetings, as the Fed comes out swinging against inflation, which has become Public Enemy No. 1. This aggressive stance has boosted the US dollar against the major currencies, as Treasury yields continue to climb higher. However, there are growing concerns that sharp rises in rates will choke growth and result in a recession.

Equally as important as the rate hikes, the FOMC is expected to announce a reduction in bond holdings, and the pace of the balance sheet normalization will be closely watched. If the Fed delivers a larger cap on holdings than expected, this would be bullish for the US dollar.

The eurozone remains vulnerable to the war in Ukraine, and the manufacturing sector continues to struggle with supply chain disruptions and price pressures. German factories are reporting a loss of momentum due to weaker economic activity, and if the EU were to place an embargo on Russian oil, it would likely lead to a recession in Germany. Inflation has been soaring, which is weighing on growth in the bloc. Last week, the German government cut its growth forecast for 2022 to 2.2%, down sharply from 3.6% in a previous forecast.

With the ECB still stuck in accommodative mode while the Fed is getting ever more hawkish, the US/Europe rate differential is widening, which spells more trouble for the euro.