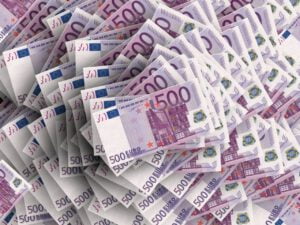 As you may have seen, last Friday the European Central Bank (ECB) published a comprehensive report on the possible issuance of a digital euro, prepared by the Eurosystem High-Level Task Force on central bank digital currency (CBDC) and approved by the Governing Council.

In a statement, Christine Lagarde said “Europeans are increasingly turning to digital in the ways they spend, save and invest. Our role is to secure trust in money. This means making sure the euro is fit for the digital age. We should be prepared to issue a digital euro, should the need arise.”

The Governing Council has yet to make a decision on whether to introduce a digital euro, however a public consultation is set to take place on October 12.

With that in mind, expert comment on the implications of this development for the EU, CBDCs and wider blockchain industry.

Jackson Mueller, Director of Policy and Government Relations at Securrency:

“A digital Euro should simply be viewed as another option for citizens to utilize as a form of payment. That’s the beauty of this space – optionality. What’s essential to get right (and to understand) is how these alternative forms of payment, whether a digital Euro, cryptocurrency, stablecoin, digital securities, or other assets, can coexist and interact with each other. There are benefits to the alternative forms of payment presented, such as anonymity and privacy. In short, a digital Euro could provide customers with greater comfort in that it is government-issued/backed, but that won’t necessarily crowd-out other developments in the privately-issued stablecoin space, given the unique attributes associated with these forms of payment.

What’s key here is that individuals have a choice and are empowered to engage with different types of digital assets, depending on their personal preferences and comfort levels.

The EU’s digital finance package is simply a recognition that these alternative forms of payment are here to stay, and that an individual’s preference in utilizing different forms of payment and the mediums by which to deliver those payments are evolving. By wrapping a supra-national regulatory structure around this, the EU is intent on driving responsible standards among the EU-member states and, given payments’ cross-border functionality, internationally.”

Coexisance Of Non-Digital Fiat And Cryptocurrency

“I view the consultation of the public as the latest positive step forward in the long path towards a Digital Euro. It seems common sense that in a monetary system that is increasingly digital, that we would have a formalized parallel to the digital branch of the Euro.

I view the use cases of these types of assets as more similar to government backed stablecoins rather than traditional cryptocurrencies, and that the two can coexist in the same way as non-digital Fiat and crypto do currently. It is promising to see more central banks making strides forward in this space, and to see the ECB following the groundbreaking steps of some of their member state governments and central banks, such as Lithuania and Estonia, in cementing digital services.”

“Central bank digital currencies (CBDCs) are often celebrated as a sign of increasing crypto adoption. They have, however, far more in common with digital entries in a fiat bank account than they do with cryptocurrencies. In many ways, they remove the founding principles of cryptocurrency, such as financial privacy and sovereignty, while replacing them with nothing of the sort. Cryptocurrencies decentralise data, while CBDCs centralise data. CBDCs have been proposed in some countries as a replacement for cash, which could drive people into cryptocurrency like Bitcoin, as well as alternative assets like gold and silver.

Regulators around the world are taking a close look at stablecoins, perhaps precisely because they could serve as competition to central bank digital currencies. Stablecoins, like  Tether, act like a Central Bank in that they burn and create to regulate the market price, without the regulations or protections in place to protect consumers.

As evidenced by the European Union’s move to trademark the term “digital euro,” the EU will likely institute strict regulations when it comes to issuing digital euros. Protectionist policies around the euro will ensure the bloc examines closely whether the euro should be accessible by households and firms directly or through intermediaries, as well as whether digital euro holdings of individual users should be limited. They might also determine whether or not startups can issue unofficial digital euros altogether.

At this point, most countries have digital fiat currency on their radar already. China appears to be the world leader in the creation of a central bank digital currency, having already piloted the technology in multiple cities throughout the country. And Europe and the US have also examined closely the creation of a CBDC. Some reports posit the US could introduce a digital dollar as early as January 2021. China, Europe, and the US will serve as the example for how to do a central bank digital currency, but at this point––regardless of how the digital euro progresses in the coming days––central bank digital currencies are on the radar of world leaders and financial authorities everywhere.”

The Digital Euro Will Complement Cash

“The ECB’s report on the digital Euro has resonated well in the ecosystem that has been divided by intense academic and professional debate in the last months. While many stakeholders might have hoped for a more concrete commitment, the report articulates the perspective of the ECB and provides the guiding principles of a potential implementation, postponing a clear decision on the digital Euro to the middle of 2021.

However, it is significant that it confirms the issue as a priority on the regulator’s political agenda. While many open questions remain unanswered, the ECB takes a clear position on two main high-level issues.

First, a digital Euro is not intended to replace, but complement cash. The latter is still heavily used by citizens among member states as a traditional and anonymous means of analog payment. I expect similar dynamics in the space of cryptocurrencies, which would remain relevant alongside a potential digital Euro as the private and anonymous means of digital payment.

Second, the ECB prefers a model, whereby access to the digital Euro is intermediated by the private sector, thus lowering concerns of disintermediation in the banking sector and providing avenues for business model innovation. Assuming a DLT-based digital Euro, this could give rise to the adoption of security tokens as frictionless fiat exchanges could be done on chain. Stablecoins, on the other hand, might face challenging times in the future, especially if backed by one asset (such as the Euro) as opposed to a currency basket.

While the report is a relatively small step towards a concrete project, it will likely further move up CBDCs on the agenda of regulators and central banks across the globe. In the realm of geopolitical and macro-economical considerations, the EC is thus trying to catch up with existing initiatives such as the Chinese digital Yuan project. Other major jurisdictions like the US are likely to follow soon. The EU can’t afford to be left behind in the digital transformation, again.”

An Important Step For The Adoption Of Blockchain In Europe

“ECB President Christine Lagarde announced the ECB’s efforts to prepare the issuance of the digital Euro, a central bank digital currency (CBDC). For the adoption of blockchain in Europe, this is an important step. The potential impact on cryptographic tokens such as Bitcoin, Ethereum or XRP is currently unclear.

The ECB wants to be prepared to issue the digital Euro for several reasons: to support digitization, respond to the significant decline in the role of cash as a means of payment, mitigate the impact of future foreign CBDCs and “private digital payments” (i.e. Bitcoin, Libra etc) and strengthen the international role of the Euro.

The digital Euro will bring blockchain use-cases to life that involve payments. When financial assets such as stocks and bonds become digital, the currency for settlement will be the digital Euro. Today, many use-cases are built using cryptocurrencies. However, most private individuals won’t use cryptocurrencies for reasons of convenience and currency risk. Stablecoins address the latter issue. Business use-cases that involve automated payments through smart contracts work–many Proof-of-Concepts have demonstrated that. However, these companies don’t want to use cryptocurrencies for the same reasons and, additionally, they face accounting and legal uncertainty as well as counterparty risk.

The digital Euro is likely to impact these use-cases. With different advantages to both CBDCs and stablecoins, it remains to be seen exactly how adoption will play out among different demographics. However, the core value proposition of many cryptographic tokens remains untouched. Citizens concerned with privacy will still find a solution in cryptocurrencies. Furthermore, with Bitcoin evolving to be a store of value and DeFi becoming a new part of the financial industry, cryptocurrencies continue to gather greater momentum.

The impact of the digital Euro is not limited to the Euro-area. A CBDC can be used globally as the settlement currency and banks can instantly convert the Euro into the local currency. Hence, one globally trusted CBDC would be enough to bring blockchain use-cases to life. This is in line with the goals of the ECB: protecting the international role of the Euro. The digital Euro is more likely to see widespread adoption by Western financial markets than other non-Western equivalents. Therefore, the preparations can also be interpreted as an answer to both China and Libra.”