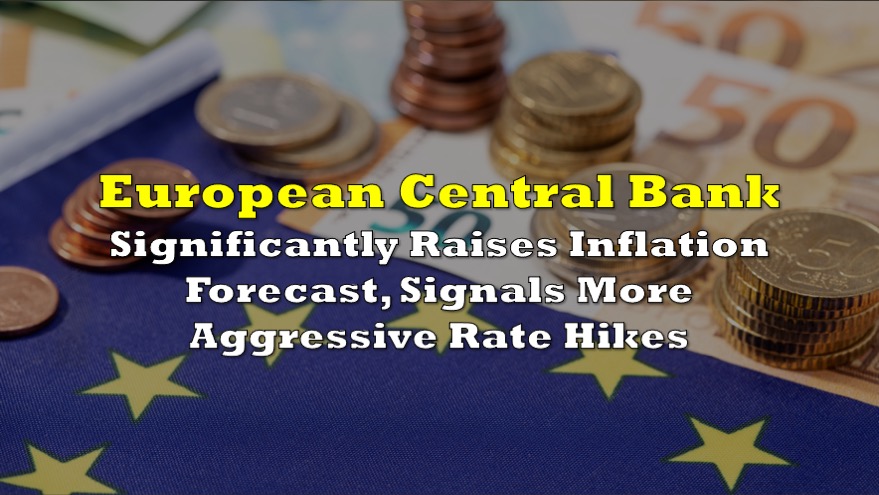 The European Central Bank has found itself in a very tough spot: with entrenched price pressures sitting at jaw-dropping levels and economic output slowing, Europe’s inflation problem— which was already unravelling long before Russia invaded Ukraine— has backed policy makers into the corner, as they must raise rates a lot more rapidly while risking slowing the economy even further.

The latest data from Eurostat showed that Euro area inflation hit a record-breaking 8.1% in May, up from 7.4% in the prior month, as surging energy prices dug deeply into consumers’ pocketbooks.

Making the situation much worse, though, was the paltry increase in GDP growth, which was up 0.6% in the first quarter compared to 5.4% in the first three months of 2021. With a slowing economy and persistent price pressures that just won’t go away, the ECB announced intentions to raise its key policy rate by 25 basis points come the July meeting, followed by an additional rate hike in September. “Beyond September, based on its current assessment, the Governing Council anticipates that a gradual but sustained path of further increases in interest rates will be appropriate,” the bank’s statement read.

As such, the ECB also substantially upgraded its inflation forecast and downward-revised economic growth expectations for the next several years. Policy makers now expect annual inflation to hit 6.8% in the current year, before subsiding to 3.5% and 2.1% in 2023 and 2024, respectively. The new forecast marks a substantial upgrade from the bank’s March projections, which called for inflation readings of 5.1% in 2022, 2.1% in 2023, and 1.9% in 2024.

“Inflation is very high, it has the potential to become entrenched unless [ECB policymakers] move, and they move aggressively and make it clear that they are going to be moving further,” University of Chicago economics professor Randall Kroszner told CNBC. “The concern that they have is that there are so many negative shocks coming from the war, sanctions, uncertainty, that the economy is going to slow down even without raising rates, so the inflationary pressures are going to come off.”

Information for this briefing was found via Eurostat, the ECB and CNBC. The author has no securities or affiliations related to this organization. Not a recommendation to buy or sell. Always do additional research and consult a professional before purchasing a security. The author holds no licenses.