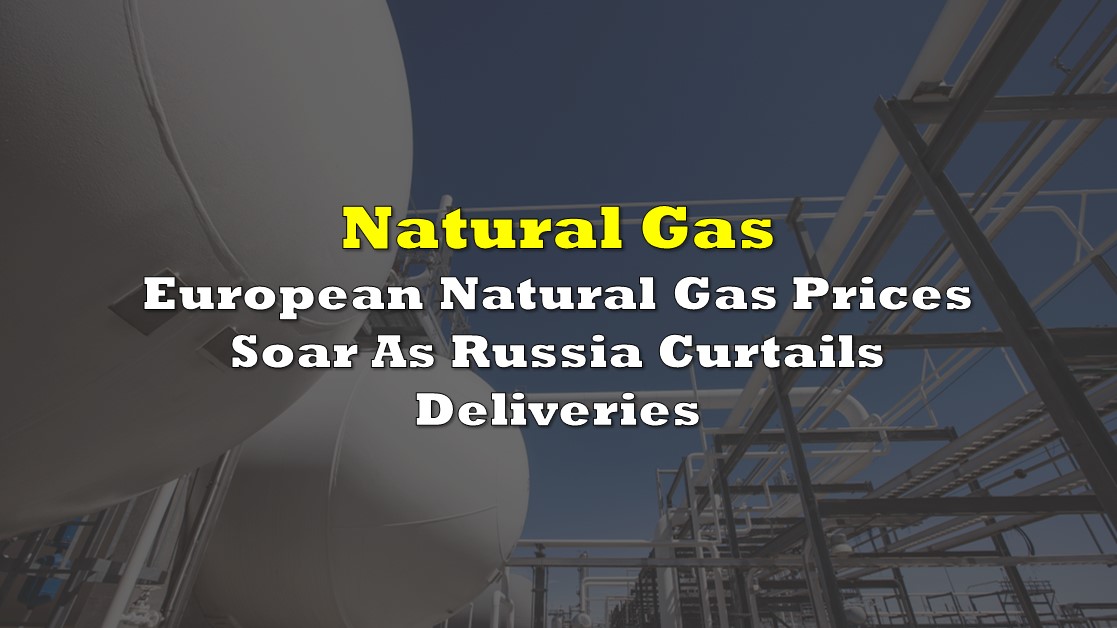 Russia’s defiant actions, together with the timing and severity of a fire at a major gas liquefaction facility in the U.S., are causing European natural gas prices to soar. Indeed, prices jumped about 20% on June 15 to around 120 euros per megawatt-hour, equivalent to nearly US$37 per thousand cubic feet (Mcf).

Of course, this rise will ultimately crimp consumer spending on the Continent and make its inflation problem that much more difficult.

On June 14, Gazprom, Russia’s state-owned gas producer, reduced its gas deliveries 40% to Germany through its Nord Stream 1 gas pipeline. The reason: Siemens delayed the return of turbines required to conduct repairs on the pipeline.

Siemens had shipped the turbines to one of its Canadian facilities to perform the maintenance, but Canada barred the company from shipping the refurbished turbines out again because of sanctions it has imposed on Russia over its invasion of Ukraine. Nord Stream 1 has capacity to ship about 5.9 billion cubic feet (Bcf) of gas per day.

On June 15, Gazprom announced it would cut its Nord Stream 1 deliveries by a further one-third to just 2.4 Bcf daily beginning June 16. In addition, Gazprom cut its natural gas deliveries to ENI, a major Italian energy company by 15%. ENI does not receive any gas through Nord Stream 1. No reason was given for the action against ENI.

These actions follow Russia’s late April decision to stop exporting natural gas to Poland and Bulgaria because the countries refused to pay for the gas in Russia rubles. In March, Russia unilaterally changed the terms of its supply contracts with “unfriendly countries” to require payment in the Russian currency.

On June 8, a fire broke out at the Freeport liquefied natural gas (LNG) facility, the U.S.’s second largest LNG export terminal and the seventh largest in the world. The facility on the Texas Gulf Coast produces about 2 Bcf per day of LNG and represents about 20% of all LNG export capacity in the U.S. In May, Freeport alone reportedly supplied around 2.5% of Europe’s natural gas demand.

Initially, Freeport, a private company which is majority-owned by CEO Michael Smith, was expected to be shut down around three weeks to repair the damage. Now, the company estimates that full operations may not re-commence until late in 2022.

To put all this in perspective, natural gas at the Henry Hub point in Louisiana trades at around US$7.01 per Mcf. So, European natural gas consumers are paying around five times that for their natural gas, and much of this differential is due to Russian retribution for Europe’s supportive posture toward Ukraine.

Information for this briefing was found via Edgar and the sources mentioned. The author has no securities or affiliations related to the organizations discussed. Not a recommendation to buy or sell. Always do additional research and consult a professional before purchasing a security. The author holds no licenses.