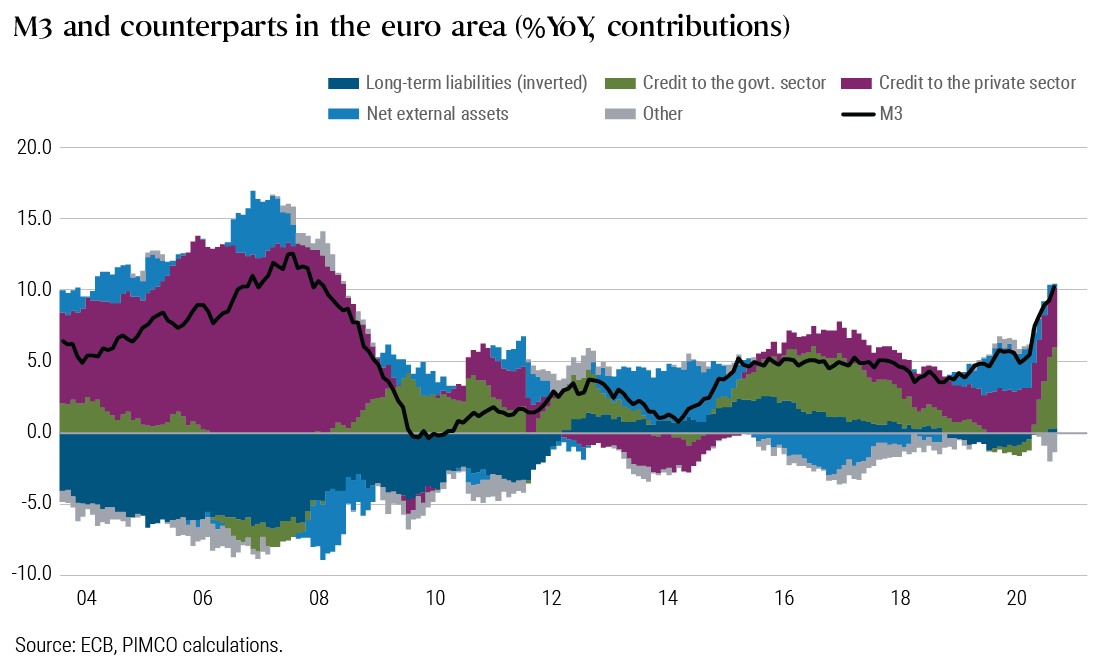 It used to be that central banks heavily influenced inflation through tools such as interest rates, money supply and bank reserves. However, in a post-COVID 19 world with interest rates close to their lower bounds, this balance may be shifting, with fiscal policy now a much more important factor driving inflation.

In Europe, unless fiscal policy continues to stimulate when the economy has healed from the COVID-19 shock, we expect inflation to remain weak in the coming years. This is despite a recent surge in money growth – once a good indicator of future inflation. Let’s look at this magnitude in more detail.

This growth has been mainly driven by:

These forces driving money growth are different from the money expansion seen in the lead up to the 2008-09 financial crisis, when M3 rose almost entirely on the back of strong credit creation to households and corporates, as seen in the chart below:

This lower private sector demand is the flip-side of higher savings. Household savings rates in Germany and France, for instance, shot up to new record highs in the second quarter of the year, and we expect them to remain high over the near future, as individuals save for precautionary reasons and firms de-lever their balance sheets.

Looking ahead, money growth will likely remain elevated over the coming quarters, as the ECB and the BoE continue their asset-purchase programmes. However, some of this growth will be offset as companies reduce debt and as some government-guaranteed credit schemes are eventually unwound.

Given this more subdued private sector demand and higher savings, we expect inflationary pressures to remain weak in Europe in the coming year. Europe’s economy is still far from running at full capacity, something that weighs on prices. Over the medium term, or 2022 and after, we believe the ECB and the BoE alone (both committed to low interest rates), will struggle to lift inflation through asset-purchase programmes, which merely change the composition of assets in private hands, from bonds to deposits.

Given these challenges on central banks’ monetary efforts, we believe fiscal policy is a much more important factor for driving inflation. Unlike monetary policy, which primarily works through interest rates, fiscal policy directly influences aggregate demand through government expenditure and taxation policy. Fiscal deficits also directly increase the amount of assets in private hands — by first replacing money with bonds, and then recycling the money back to the private sector through lower taxes or higher spending. This capacity may be more effective at lifting inflation – but for this we would need to see the fiscal stimulus programmes continue when the economy returns to full capacity.

However, this is not our base case for now. Although the Eurozone is unlikely to repeat the austerity plans of 2011-14, we believe fiscal policy is unlikely to remain very stimulative after the crisis. In some countries, Italy for example, fiscal capacity is limited, at least to some extent constrained by fiscal limits imposed by the European Commission. Other countries, like Germany, have ample fiscal space, but they are less likely to use it.  And there are question marks whether the U.K., while unlikely to return to austerity, will continue to fiscally expand at full employment.

With inflation set to remain low over the cyclical horizon, duration should remain anchored. If fiscal policy remained expansionary post the COVID-19 recovery, the risk of higher inflation would increase. For now, we think that risk is higher in the U.S., given more fiscal willingness and an accommodative central bank, whose new average inflation mandate should accommodate any future fiscal easing. We therefore favour U.S. inflation-protection securities, or TIPS, over their UK and euro-area counterparts.

Read PIMCO’s latest Cyclical Outlook, “The Long Climb” for detailed insights into the 2020 outlook for the global economy along with takeaways for investors.