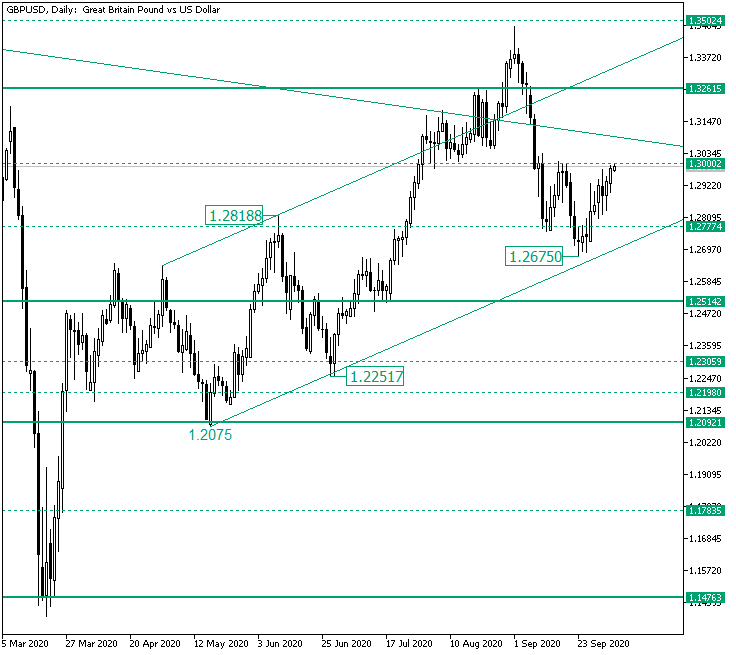 The Great Britain pound versus the US dollar currency pair sits just under the 1.3000 psychological level. Where to from here?

However, as the retracement from 1.3502 failed to find support at 1.3261, the price fell beneath the triple resistance defined by 1.3261, the descending trendline, and the upper line of the ascending channel.

This fueled the bearish enthusiasm so much that they were able to drive the price almost back to the lower line of the ascending channel, noting the 1.2675 low.

From there, a new rise commenced, one that was able to lock the 1.2777 intermediate level and touch 1.3000, a psychological level.

Given that 1.3000 is a resistance, as it was confirmed like so on September 18, and due to the fact that the price came, yet again, quite close to the descending trendline, which plays the role of resistance, the bulls could meet some wealthy bearish opposition.

If this would be the case, then 1.2777 may be the next area to be paid a visit. Of course, as this level — alongside the lower line of the ascending channel — makes up a support area, the bulls could try a comeback from here.

The drop from the 1.3482 high started a depreciation that recorded the 1.2675 low. However, as the shrinkage was not able to continue, the price got above the firm 1.2783 support level.

So, for the time being, the price oscillates in a flat lined up by the two aforementioned levels.

If the resistance remains in place, in the light of those discussed for the longer term, the bears could put a lot of pressure on the support area, targeting 1.2612.