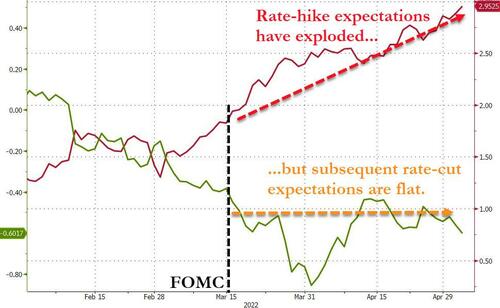 Since the last FOMC meeting, the short-term interest-rate (STIR) market has adjusted dramatically more hawkish in its outlook for the rest of the year – now pricing-in 11 more rate-hikes (that includes the expectation of 2x 25bps hikes today). But at the same time, the expectations for subsequent easing from what will inevitably create a recession have barely budged…

Markets have been extremely volatile in the weeks since The Fed meeting (amid endless hawkish jawboning) with the dollar surging almost 5% higher against its fiat peers while bond prices have collapsed. Gold and stocks have been equally pummelled since March 16th, but as is cxlear from the chart below, stocks have been a bloodbath since the post-Fed meltup finished at the end of March)…

The Treasury curve is screaming Fed Policy Error imminent, having flattened into inversion since the March statement…

To those claiming The Fed is being too hawkish, bear in mind that The Fed is 1165bps ‘too easy’ based on the Taylor Rule…

Before today’s statement, the market is considerably more hawkish than the median dots from The Fed through 2022 and then more dovish than The Fed expects to be in 2023 (because The Fed can’t admit it expects to create a recession that needs rate-cuts)

So expectations are fully priced in for a 50bps hike today BUT the question is what tone is set going forward – for both the rate trajectory and pace of QT – and will the dots catch up to the market once again.

And if you think stocks are pricing-in all this hawkishness, think again (note that after the last Fed meeting, stocks went vertical in a massive hedge-unwind-driven melt-up for two weeks)…

“The Fed went to 50BN a month in September of 2018 and had to stop five minutes later in December this was after promising Wall St economists they were on Auto-pilot all the way up to a 2T reduction. Now, they are going to give it a try at 90B a month in May with back to back 50 bp hikes? Who are they kidding?

It’s the worst start to a year for stocks in decades, consumer savings is down to the bone, GDP prints negative, and the Fed is going to kick off a record tightening cycle? It´s all a show.“

And remember, SocGen have warned that The Fed can only hike rates to 1.00% before all hell breaks loose.

So what did The Fed do…

The ‘highly attentive’ comment is somewhat hawkish but overall, this not more hawkish than consensus.

On The Fed’s plan to shrink its balance sheet (QT):

Finally, we note that this is the first 50bps hike since May 2000 and the first back-to-back FOMC meeting hikes since 2006.

Read the full redline below: