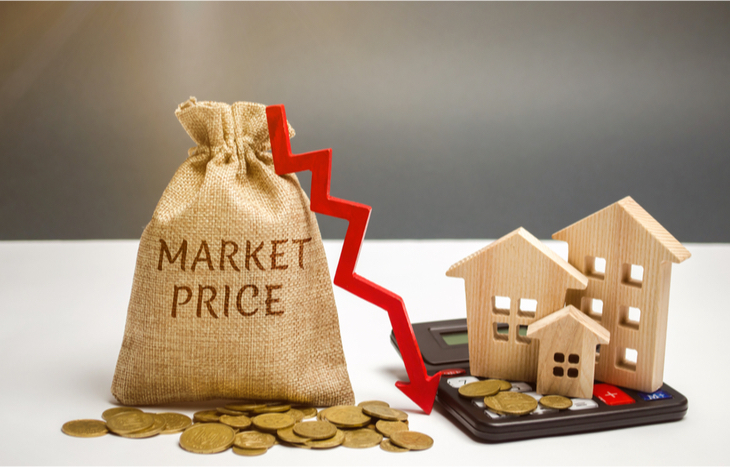 Interest rates, the job market, and inflation all play a role in the housing market. Currently, they all seem to be trending in the wrong direction. If the issues worsen, it may lead to a housing market crash in 2022.

The housing market was hot in 2020. Government stimulus payments and lower expenses due to stay-at-home restrictions lead to excess savings for potential home buyers. On top of that, mortgage rates were extremely low, making home buying much more affordable than historical rates.

When those potential home buyers realized they would not lose their jobs as the COVID-19 pandemic persisted, they entered the housing market with gusto. On the other side of the equation, home sellers didn’t necessarily enter the market as quickly. Therefore, demand for housing was red hot, and housing inventory was not. The imbalance caused home prices to rise steeply.

Many times, homes were sold within days. Sometimes buyers bought homes without inspections or appraisals. The housing market was so competitive that home buyers took on these added risks because they feared losing out on the home purchase.

Fast forward to 2022. Stimulus payments are a thing of the past, and many home buyers have already purchased a home. In addition, the Federal Reserve has vowed to increase interest rates throughout 2022. As interest rates go up, so do mortgage rates that home buyers pay when they buy a new home. The higher rates have made home buying unaffordable to some home buyers.

Will the Housing Market Crash?

Experts have different points of view when asked if the housing market will crash. Some have an optimistic view, some have a pessimistic view, and some are in the middle. But not many expect a crash.

Another reason the housing market crashed during the Financial Crisis was forced selling when mortgage loans soured. Forced selling happened for a few reasons. For one, foreclosures meant banks took possession of homes and tried to sell them quickly to recoup losses. Other times, home values declined to a point where homes had negative equity. At that point, banks again moved to foreclose and sell quickly. Today, mortgages are being paid on time, and delinquencies are low. In addition, home equity is in much better shape than during the Financial Crisis.

Another article thinks a crash is not likely, but the housing market may be due for a pullback. The article says rising mortgage rates will take some home buyers out of the market. As home buyers pull back demand, two things could happen—a correction or a crash.

The article says that a crash like 2008 is not likely. Although, high home prices and higher mortgage rates may cause the housing market to cool in 2022. So far, home prices have declined every month in 2022.

The article goes on to say that mortgage rates have risen to 6% from 3.2% at the beginning of 2022. Rising interest rates have caused home buyers to retreat. For instance, mortgage applications have been down 16% since last year. The article also notes a speech by Federal Reserve Chairman Jerome Powell. He said the Fed is watching the housing market very closely but did not rule out a decline in home prices.

JPMorgan also put out a research piece recently. It said the nationwide nominal home price index is not 40% above its 2012 low and 4% higher than its 2006 peak. The piece points out that there are no signs that debt growth is as high as in 2006. Since 2006 proved to be a housing bubble, current home prices deserve a closer look.

The article concluded, “On the whole, the U.S. housing market still looks considerably less risky than it did in the mid-2000s. While there are some pockets of rapid price growth and extremely high price levels, in addition to a few places with fairly high prices despite growing supply, there is nowhere that has combined these price patterns with rapid debt growth, as occurred in some places in the mid-2000s.”

Forbes weighed in on the state of the housing market and a potential housing market crash. They asked nearly a dozen housing experts what their forecast for the housing market is over the next five years. Their article showed that most of the experts expend housing demand to continue, but there are signs that home prices could fall due to inflation.

The article points out that the housing supply remains low, and home buyers are young. The largest segment of home buyers is first-time buyers. As those younger home buyers continue to look for homes over the next five years, home prices could benefit in the long run.

On another point, the article says that home supply can’t keep up with demand. New homes will take time to build, which could lead to continued home supply and support home prices. Beyond supply and demand imbalances in the housing market, newly built homes may have to make up for lower existing home supply shortages.