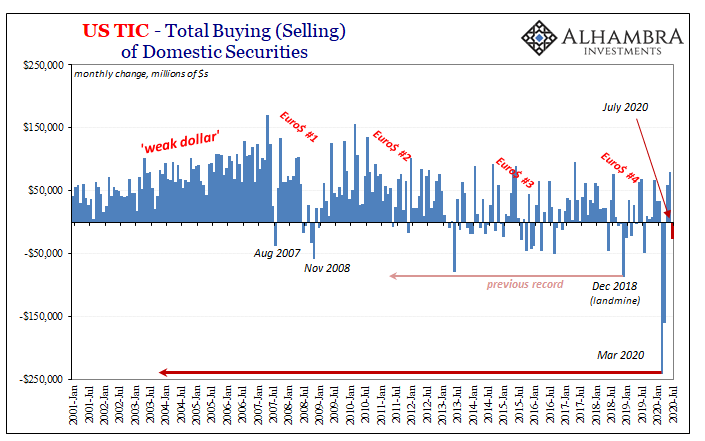 When the eurodollar system worked, or at least appeared to, not only did the overflow of real effective (if virtual and confusing) currency “weaken” the US dollar’s exchange value, its enormous excess showed up as more and more foreign holdings of US$ assets. Mostly US Treasuries, especially in official hands, but not entirely those. That much is perfectly clear; you can actually see the difference on every chart despite all the QE’s and trillions in bank reserves following after August 2007.

Therefore, a net negative monthly change in US TIC – the gross buying and selling of US$ assets by foreigners of all kinds – has been unusual. Negative means more selling than buying, and not coincidentally these months tend to show up and cluster when the US dollar exchange rate is rising or just remains stubbornly high despite a “flood” of “liquidity” by the central bank offering…something else.

The missing factor in between those two results is the eurodollar and what can only be a global dollar shortage. The more of it in any given month, the less US$ assets foreigners are able to buy. And, in the more extreme cases, such as March and April this year, outright selling and big.

With a flood of liquidity being reported by every single financial media outlet, what’s that negative number doing for July 2020 as just reported by TIC this week? It shouldn’t be there, but, then again, we’d already been put on notice that “something” changed in July. From oil to corporate credit spreads and all the eurodollar space in between, data for that particular month keeps suggesting a change in character.

As unusual as it has been for negatives in headline TIC in any month, combining official activity with private activity, it’s more unusual still to find outright net selling from the private side alone. 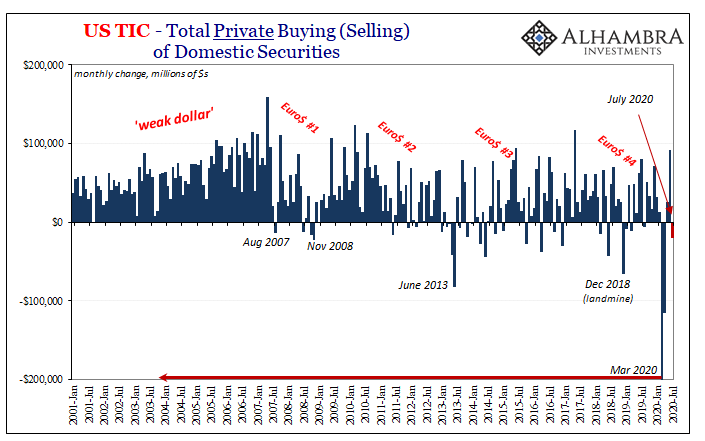 Once again, the negatives correlate with the most extreme shortage cases, and there’s another minus in the latest month. The last time private net selling was as much as it had been in July, that month was, uh oh, December 2018.

And that’s really the point – how in the world can TIC be suggesting July 2020, with reopening “V’s” flying everywhere around us, and Jay Powell’s magnificent “money printing” largely to thank for them, two months back it was more like 2018’s landmine than a healthy, dollar crash-y, everything-is-awesome kind of trend? Even a little like December 2018 should have been outright impossible.

It only gets worse. Just what were private foreigners selling in July, you ask? The very things we’ve been talking about for more than two years, the fly in the repo ointment, to the toothpaste the global monetary system had was so paralyzed by fear (especially last September) if it had ever gotten out of the tube.

US$ corporate bonds. A record amount were sold by private foreigners, and it wasn’t even close. 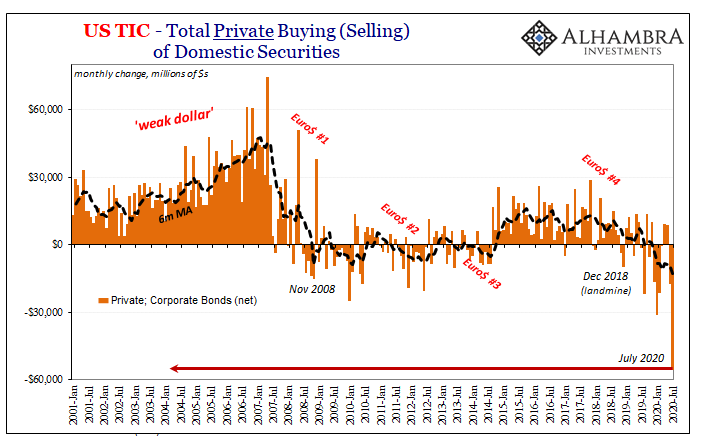 Not only that, this has obviously become more and more common since…December 2018 when the basis for that year’s landmine really did appear (at least to me) to have collateral bottleneck potential at the very heart of it.

That would seem to make perfect sense for all the months in between December 2018 and, say, April 2020. GFC2, as we know, proved that the thing was real; there actually was a bottleneck which the Fed had made all the worse by responding to its symptoms (especially last year’s repo rumble) stripping even more of the best collateral from the repo system.

T-bills. The very instruments everyone has to rush into when junk collateral no longer works. That’s the bottleneck. And if hundreds of billions are sitting idle in the Fed’s hands because the FOMC rushed to all the wrong judgments about last September?

Way to make things worse, Jay! If the Federal Reserve really was trying to crash the system as so many (wrongly) allege, would officials there have done anything different than not-QE? Nope.

And that’s a powerful point here. When things get rough, you can only count on the Fed for bank reserves (duck and cover), at best. At worst, they’ll make everything worse especially in collateral. What would you do if you knew you couldn’t trust these fools? Absolutely nothing different than what we see in the TIC data for July.

This has, ironically, left credit spreads stuck at equivalent December 2018 levels ever since July: 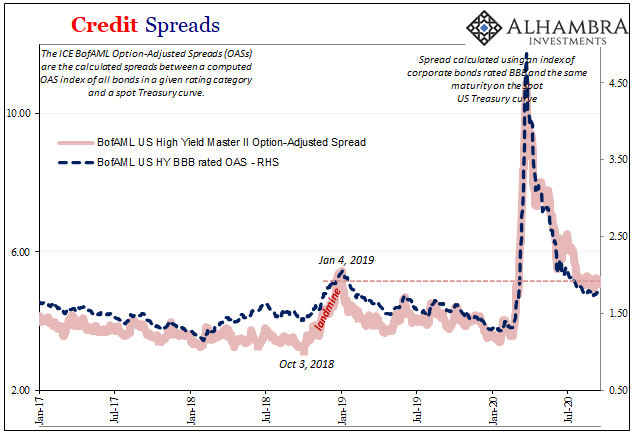 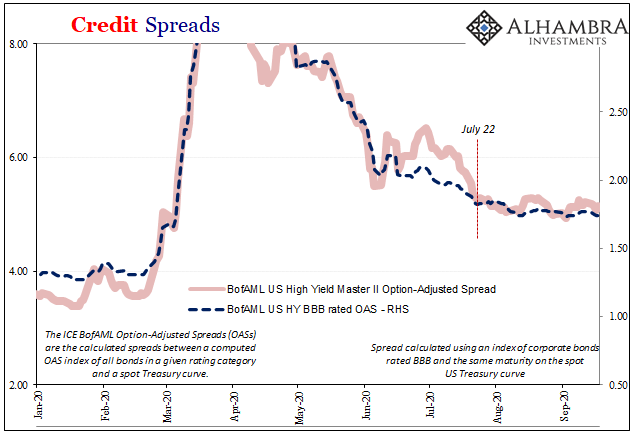 More concerning, though, in a more comprehensive dollar shortage view, why weren’t the full proceeds from those corporate sales “invested” in other US$ asset classes? This was no rotation, it was a shortage consistent with fears, after being proven, of the same bottleneck.

Undoubtedly some will claim that foreigners were selling because Jay was buying. According to the latest H.4.1 balances, though, including those for the two Corporate Credit Facilities, LLC., the special purpose vehicles (SPV) the Federal Reserve set up in partnership with the US Treasury (equity investor) to do the purchasing, only $12.9 billion (total) has been. Since inception.

No, what foreigners have been doing is taking advantage of reopening inertia and survivor’s euphoria as spreads have come down (prices back up) in order to get out of Dodge while they can. Mutual fund managers and so many others in the financial services industry may be comforted by Jay Powell’s (empty) promises of market support, but it doesn’t appear as if that view extends to the foreign financial sector (who would likely be sitting on that junk repo collateral).

There’s more to be written about this and the rest of July TIC; suffice to say for a late Friday, none of this is consistent what would have happened in July 2020 had the financial system been four months into actual recovery; fixed in reality rather than imagination by the magnificent over-genius of the wise monetary stewards.

No, these are numbers way, way too close to a month like December 2018 when things like this had previously confirmed once and for all the world was heading in the wrong direction because the dollar bull was kicking it up a notch.

Too much dollar shortage for that “flood” to have been anything other than a carefully crafted figment, Jay Powell using the only tool he really has in his toolkit. Reports of the flood have been greatly exaggerated. On purpose. 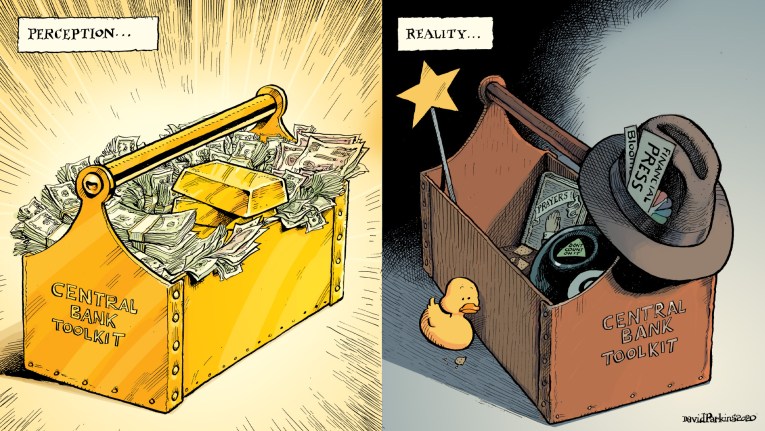 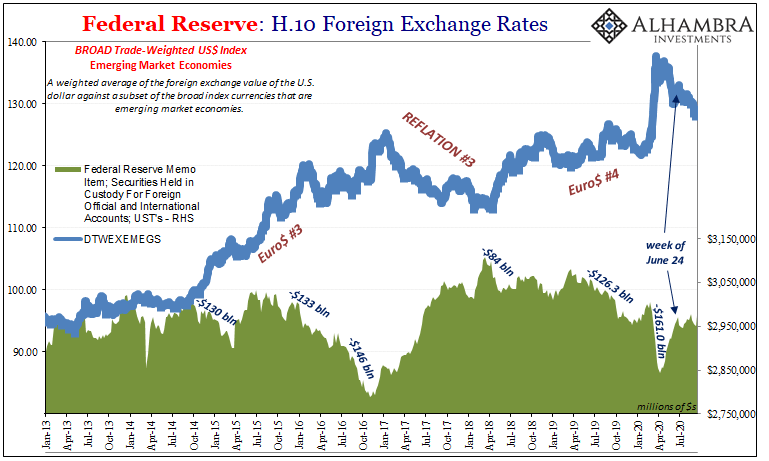