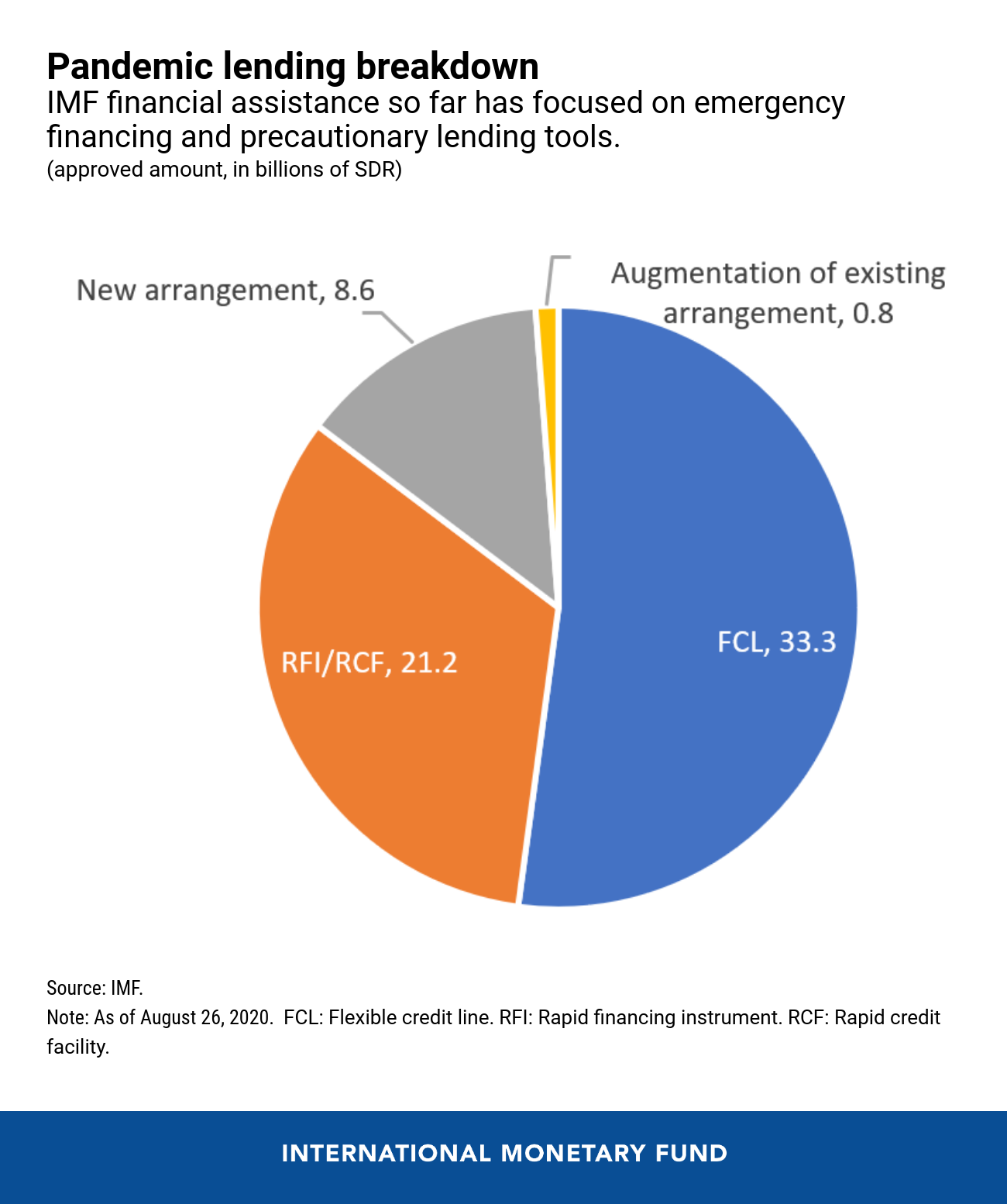 In the face of unprecedented uncertainty and the severe economic impact triggered by COVID-19, the Fund continues to adapt its lending. At the same time, it aims to ensure realistic targets, uphold the credibility of programs, and foster national ownership.

To date, the Fund has provided financial assistance, mainly through emergency lending and precautionary lending tools, to about 80 countries.

In addition, more than 30 countries have expressed an interest in Fund-supported programs to rebuild financial safety nets, and deal with the immediate aftermath of the pandemic.

To help members cope with this once-in-a-century pandemic, IMF lending programs are adapting—through innovation and increased flexibility—as countries move from the initial containment phase, to stabilization, and eventually to recovery.

IMF-supported programs in the near term focus primarily on stabilizing the economy. This includes establishing spending priorities (for example on health and other social spending, as well as liquidity and income support to the most affected firms and households). Monetary policy should be as accommodative as possible while being mindful of inflation risks, and financial sector policy should seek to avoid a credit crunch while maintaining sound balance sheets.

However, conventional policies alone may not be enough. In some circumstances, additional measures may be considered. For instance, the flexibility built into the existing regulatory framework could be used to the fullest, and there may be further room for using unconventional monetary policies. However, some other measures—such as monetary budget financing—may risk undermining hard-won gains in policy making and institution building, set damaging precedents, and would be hard to unwind.

This crisis has tested the resilience and agility of governments and central banks.

During the current crisis, the Fund’s program monitoring (including on emergency financing) has put a greater focus on the quality and governance of spending measures—rather than specific and measurable conditions, for example, on central government borrowing, that are traditionally attached to IMF lending.

The reason for this is simple. The unprecedented uncertainty brought on by the pandemic means it has become more difficult to plan economic policies, and targets risk quickly becoming obsolete.

This trend is likely to continue for the duration of the pandemic until a firmer view on the economic outlook and financing conditions can be established. Notwithstanding a more holistic assessment of policies in the meantime, countries will need to demonstrate that Fund resources are being used properly.

At the same time, country authorities will need to remain agile in reacting to economic shocks and addressing future risks. This puts a premium on regular discussions between country authorities and Fund staff about adverse scenarios and adequate policy responses in both program and surveillance cases.

With rising debt levels, more countries are likely to be vulnerable to debt distress. When a country’s debt sustainability is unclear, extending the maturity of government liabilities can be helpful in determining the future course of action until there is further clarity about the need and scope for a possible debt treatment later on.

This involves costs—such as rating downgrades, and possibly the declaration of a credit event—but, in the end, investors can benefit by resolving the underlying problems that led to loss of market access.

By freeing up critical resources and reducing pressure on foreign reserves, maturity extensions can also help reduce the need for austerity and monetary tightening that can deepen economic pain.

Finally, many countries may be able to manage the pandemic and its economic fallout without Fund financing but may want to seek insurance against unforeseen shocks. For those, the Fund’s precautionary lending tools are an attractive option that can ease market access at lower costs. These can be unwound gradually as conditions improve, for example, countries with Flexible Credit Lines could transition to Short-term Liquidity Lines.

For most countries, the post-pandemic economy will be different from what existed before. As recovery takes hold, and the effects of the crisis become clearer, Fund programs will need to shift focus to growth-enhancing reforms, to help members achieve strong and sustainable recoveries from the crisis.

For example, reforms to allow employees to move easily in and out of jobs are less critical to containing the virus and stabilizing the economy but may be important in adjusting to a new normal as economies could be undergoing significant structural change, coping with digital technologies and the effects of climate change.

As a result, the IMF will continue its collaboration with other international financial institutions to implement structural policies. These include health, debt management, and social protection, improved governance in lending, as well as steps to improve resilience to future health and climate risks.

This crisis has tested the resilience and agility of governments and central banks to the extreme. The IMF is committed, together with its partner organizations, to matching these efforts on the international level. Efficient deployment of the Fund’s lending tools will continue to play an integral part in this regard.