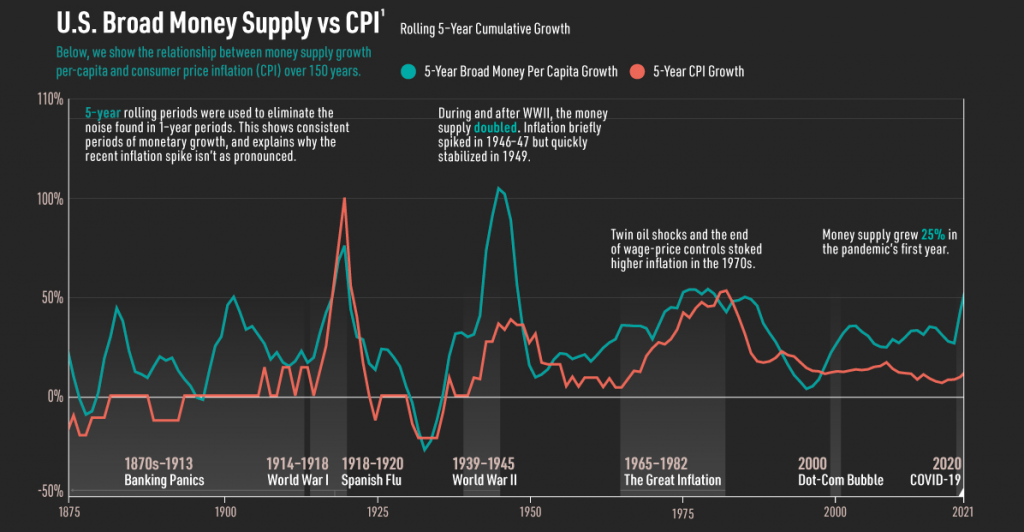 It is of absolutely no value to point out that we have been stating for years that the only possible outcome from quantitative easing by central banks is rampant inflation.

This is because of the following equation:

In a nutshell, the creation of dollars through quantitative easing, which forms the capital base against which banks make loans, results in an exponential expansion of the global liquidity pool at a rate that far exceeds the human economy’s ability to absorb through the purchase of goods from commodities.

Corporations rely on low-interest rates to buy back their stock, resulting in fewer shares and positive share price growth.

Thus, we get more money chasing a finite pool of assets, resulting in bidding up of the assets as competition for acquisition of control is a simple arithmetical matter. Who bids the highest wins the prize.

And as we have indicated since at least 2012, the inflationary pressure can be distributed and kept nominally invisible in a financial system that constantly creates new instruments to absorb the expanded liquidity.

The explosion of synthetic assets (those which have no tangible existence) since the beginning of this century is essentially the result of collusion among the central banks, governments and oligarchs who influence them to relax rules so that there are more assets to buy.

When the rate at which synthetic assets are created falls behind the rate at which the multiplier effect of Quantitative Easing increases the liquidity pool, prices of tangible assets – commodities, real estate, capital goods – must rise until the price tempers the demand.

This has come to pass, yet those of us who recognized the pattern and tried to call attention to it are relegated to shadow banning as Google incessantly seeks to array the public discourse along with government-sponsored messaging.

And so it is that we arrive in the current situation where the mainstream (Google and government-anointed) press claims that the market is improving because raising interest rates and dialling back stimulus or quantitative easing is good for markets.

Such a glaring example of Orwellian doublespeak has never been seen.

There can be little doubt that the Tier One beneficiaries of QE have now been tasked with buying extraordinary blocks of major US index futures, as can be deduced by the strange and counterintuitive volumes in those instruments before Fed announcements.

Again, these prognostications and theories will go largely unregistered by the utterly rotten financial system and media because the investing public is now force-fed only sterilized, Fed-approved messaging from the likes of CNBC, Bloomberg, WSJ etc., who, through the limitations of journalism, can only report on the data the Fed presents with them, Treasury etc.

They are led around by the nose without realizing it.

Be that as it may, it behooves us of modest means and ambition to protect ourselves as well as possible from the onslaught of verbal satellite debris designed to confound us into a passive stupor where we hand over our savings into the machine for shredding.

The Fed has issued statements suggesting the rate at which interest rates will be increased will be more intense than that transmitted back in October 2021, but this is merely the Fed trying to use the Force to get us to do its bidding, i.e. don’t bid up commodities, buy bonds, keep buying real estate.

But these are the worst places to be for retail investors. Especially real estate.

The price action of residential real estate is the purest example of the phenomenon whereby monetary inflation always precedes and then drives price inflation.

The rising prices of the asset class due to more demand entering the market than supply can be created is the very essence of economics 101. But just as is taught in cyclical economic theory, the result is always an oversupply as soon as the supply side catches up, which induces a flattening of prices ahead of a retreat, as the Fear of Missing Out sentiment is replaced by the Don’t Catch a Falling Knife mindset. With the Fed’s back firmly against the wall, it has no choice but to raise interest rates – the gasoline on the real estate fire – in an effort to marshall the lesser of two evils: higher borrowing costs over higher consumer goods prices.

But the Fed – and central banks everywhere – are about to discover the unfortunate kernel of truth in their financial bulimia scheme: the financial system will not respond in the way the Fed wants it to just because it raises interest rates.

Instead, the volatility of the markets will increase, and the Fed’s attempt to shore it up through induced asset purchases in the index futures market will only temporarily assuage the overcapitalized investor pool.

The problem is that the most aggressive investors, just as they did in 2008, will begin to short the market, knowing that without the twin stimulants of low-interest rates and Quantitative Easing, there is only the possibility of asset price contraction, as sell-side participants begin to overwhelm any artificial buy-side support.

Economists like to point to “business cycles” to feed the optimism that allows us to go about our day under the threat of financial storms. These business cycles are highly misleading because they presuppose certain constants to remain in place – like infinite commodity supply from nature – indefinitely.

But we are now at or near “peak” production of everything from oil to lithium to fish to timber, and since all is derivative and dependent on the primary extractive industries, the convergence of population-driven demand with resource depletion is about to impart its ultimate catastrophic influence. The business cycles are dead. The production of the planet is maxed out.

The economic recession on the horizon is about to arrive, and the social friction level is rising to critical levels. Already grocery stores are looking lean, and technology is no match for the intensity of the ecological correction about to unfold.