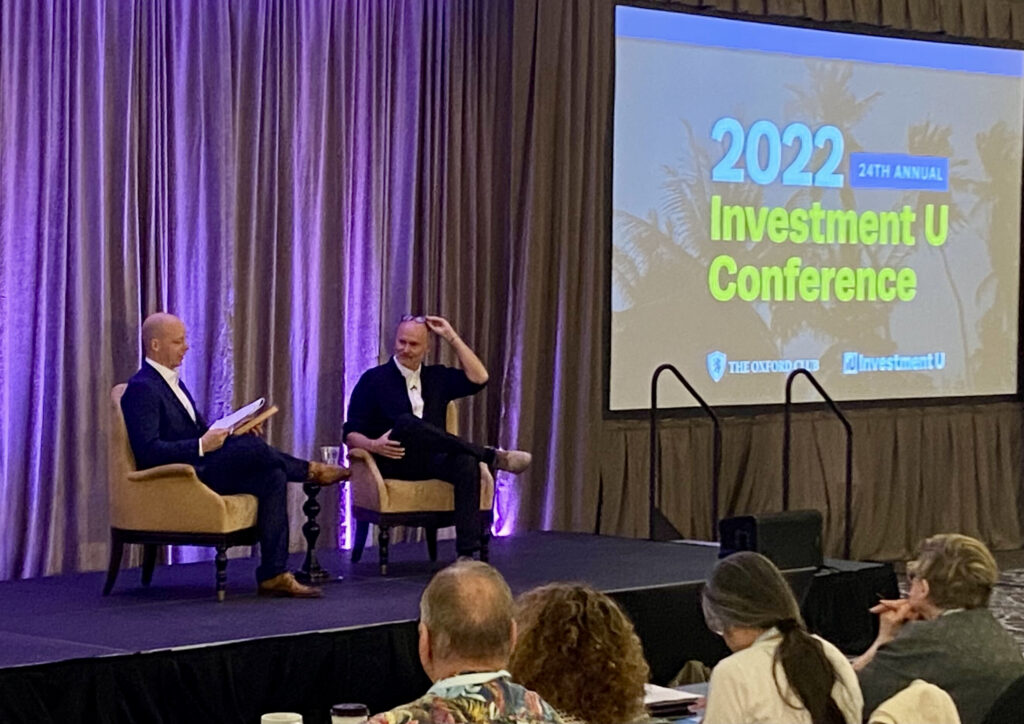 To open up the second day of the Investment U conference in San Diego, the morning’s master of ceremonies, Dr. Mark Skousen, conducted an experiment. He presented a jar of pennies to the audience. Then he asked how much people were willing to pay for the jar.

Before bids were made though, he asked attendees to write down how many pennies were in the jar. Once the auction began, the bids came fast and high. One gentleman was willing to pay as much as $50 for the jar of zinc and copper. This part of the experiment went about as expected for Dr. Skousen. It demonstrated the madness of crowds.

This was done to demonstrate how the same markets can be both overvalued and undervalued depending on outside circumstances. And it turned out to be a harbinger of the remainder of the weekend’s market analysis.

He also mentioned a handful of stocks that he thought were good investments amidst inflation for 2022. These included Main Street Capital (NYSE: MAIN), SPDR Gold Shares (NYSE: GLD) and Bunge Limited (NYSE: BG) among others.

Dr. Skousen’s presentation was followed by Keith Kaplan, the CEO of TradeSmith. Kaplan took the time to explain how to discover what’s really happening in the markets. And it should be no surprise that you won’t learn about it from the talking heads on television.

During his 30-minute presentation, he showed how investors can learn to maximize capital by focusing on healthy stocks, indexes and sectors. And while there are several tactics to go about this, Kaplan demonstrated how one of TradeSmith’s latest tools, CoPilot, is a powerful tool designed for short-to-medium term options trading.

Our friend Matthew Carr followed Anandappa with a presentation on an area of the stock market that got a lot of attention last year: IPOs. Now the IPO market has been relatively quiet of late due to volatility. But it’s likely to explode again soon, according to many market experts including Carr.

As such, he instructed ways investors can avoid getting burned by FOMO by targeting only the best companies at the best possible pivot points… Leading to the biggest possible profits.

The Second Half of the Morning

After a quick coffee break and stretching of the legs, Nathan Hurd of The Oxford Club welcomed to the stage rebel hospitality entrepreneur and New York Times bestselling author, Chip Conley.

Conley brought with him some 35 years of professional experience in the hospitality industry to explain the joys of getting older. After joining Airbnb (Nasdaq: ABNB), which was led by a group of younger entrepreneurs, he initially took umbrage with being called an “elder.” But he has since embraced it wholeheartedly. To explain, he drew from his book, Wisdom at Work: The Making of a Modern Elder.

The simple fact is people are – for the most part – living longer. And at midlife, many think they should slow down. But this is dead wrong according to Conley. Studies have also shown that the U-curve of happiness reveals that happiness levels increase as you approach 50 and beyond. So embrace it and make the most of it.

Conley’s presentation was followed by an intimate Q&A session between Hurd and Conley. Here, Conley explained his theory on “Middlescence.” This is when you emerge as an elder and have more wisdom to share. The two also explored the “great midlife edit” and the importance of cultivating community.

This fascinating talk on the beauty and benefits of aging was followed by a presentation by Donald Hosmer of Royal Energy, Inc. He explained to attendees the ways investors can acquire low-cost oil reserves. Hosmer illuminated a new way to invest in energy using your tax dollars. Furthermore, he laid out investing in oil fields can result in a 100% tax write-off that can be used to offset ordinary income, IRA/401(k) withdrawals and capital gains taxes.

After lunch, guest speaker Peter Behncke of Gold Royalty Corp. detailed reasons he believes royalty and streaming companies are the best way to play the current gold bull market. We all know inflation is running rampant. However, gold has strong fundamentals as real rates continue to become more negative. The reason is, he explained, royalty and streaming companies provide diversified exposure to gold prices and exploration.

And at the same time they are insulated from cost inflation and have minimal overhead costs. As a result, royalty companies and streamers outperform operators, developers and physical gold in both rising and falling gold markets.

From there, attendees and home streamers were pivoted from gold to silver. President and CEO of First Majestic Silver Keith Neumeyer explained how silver is a critical element that will be used to achieve net-zero emissions. This makes silver a strategic metal to invest in. On top of this, silver is already an integral element of scores of everyday products. All of which makes a bullish case for silver.

After the precious metals talk, Nathan Hurd came back to the stage to talk about methods of creating your rich life. The simple fact is that we are all drowning in information. And the technology that has helped proliferate the spread of information is both a blessing and a curse.

Human output has increased… But happiness has not. In fact, depression levels and the number of folks reporting prolonged levels of stress are skyrocketing. But Hurd introduced a number of exercises to help us all overcome these problems and start enjoying life again. He also offered this spreadsheet with suggestions to help filter out some of the noise of everyday life and start focusing on what really matters.

Nearing the End of the Day…

Before day two of the Investment U conference drew to an end, President and CEO of Riverside Resources John-Mark Staude explained how global events were impacting commodity prices and outlooks going forward.

And the day came to a close with Bryan Bottarelli and Karim Rahemtulla of Monument Traders Alliance explaining their methods for investing amidst inflation, war and general uncertainty. Rahemtulla gave a crash course on cluster buying, which he has previously discussed here. He then explained how it was possible to further capitalize off this information using LEAPS.

Then, Bottarelli discussed the two chart patterns that he relies on most amidst uncertainty: the “W” and “M” patterns. He’s been using them for years to routinely pocket 20% trades in a single day. Worth noting, the secret to his success comes from finding these patterns using a three-minute candlestick chart.

At the end of the day, it was a lot of information to take in. But a lot was learned. One member shared that they had no idea they would be able to learn so much about investing in just two days. And the Investment U conference still had another day left…