[I wrote this last weekend, but Jason Furman beat me to it.]

It’s not just the US that has high inflation; consumer price inflation in Europe is running far above the ECB’s 2% target. Does this mean the Eurozone economy is also overheating? I doubt it, although Eurozone data is so confusing that it’s hard to be certain.

I like to begin with NGDP data.  The FRED database has Eurozone NGDP data, but only up to the 4th quarter of 2021.  I went to Eurostat to find out what’s causing the delay, and discovered that 2022:Q1 NGDP data is available for 18 of the 19 Eurozone members.  What’s holding things up?  You guessed it—Greece, a country that never should have been allowed into the Eurozone.  For what it’s worth, the performance of Eurozone NGDP up until late 2021 looks almost perfect—right back on trend:

Between 2019:Q4 and 2021:Q4, Eurozone NGDP growth averaged about 2.2%, with 2.1% inflation and 0.1% RGDP growth.   So what’s all this we hear about high Eurozone inflation?  At first I thought that perhaps their GDP deflator was rising much more slowly than their CPI.  Not really.  CPI inflation ran at 2.25% from November 2019 to November 2021.  The actual problem is the disgraceful delay in reporting the NGDP data.  Eurozone CPI data is available monthly, and their CPI has risen by 5 percentage points in just the 5 months since November 2021.  So the high Eurozone inflation that we read about is mostly due to very recent price increases, presumably associated with the Ukraine War and perhaps other factors such as Covid in China.  (Ukraine affects Europe more than it affects the US.)

Matt Yglesias has a tweet suggesting that aggregate demand growth in the US is better than in Europe: 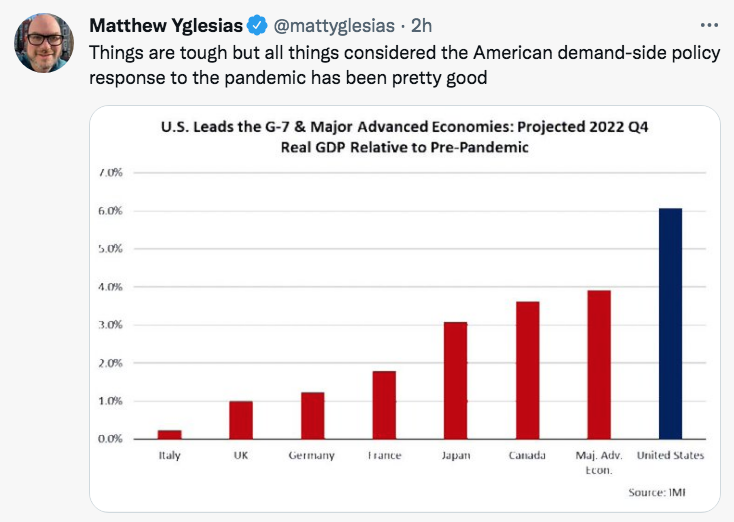 I’d say the growth in AD has been stronger in the US, but the growth in AD has been better in Europe—indeed near perfect.  US spending growth has been too strong.  This claim might seem counterintuitive given that our economy is doing better than the Eurozone economy.  But our relative strength all comes from the supply side, where we significantly outperform Europe.  Under Bernanke, the US did a much better job of controlling AD than did the Eurozone, but in recent years the ECB has greatly outclassed the Fed.

To further assure that the Eurozone is not suffering from any excessive demand-side inflation, I decided to confirm the NGDP data by looking at nominal wage growth (from Trading Economics).  Once again, there is no evidence of overheating in the Eurozone: 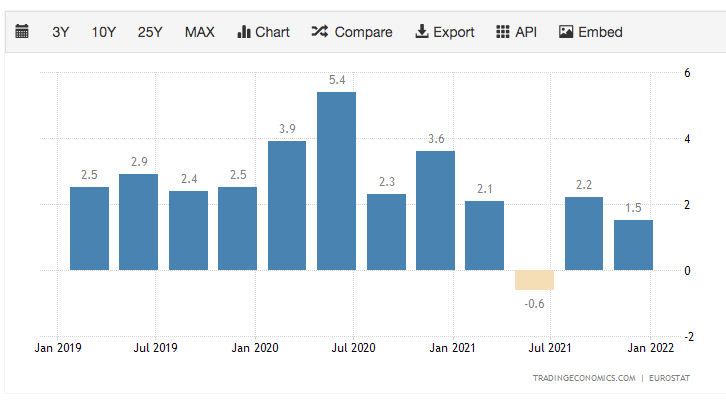 The 2020:Q2 wage spike presumably represents a labor force composition issue, as low wage service workers disproportionately lost jobs.  A year later that unwound and ever since then nominal wages have been well behaved.  In contrast, US nominal wage growth has accelerated to levels inconsistent with 2% inflation:

To summarize, if you just look at headline inflation then the Eurozone looks almost as bad as the US.  But on closer inspection, the US inflation problem has major contributions from both supply bottlenecks and excess demand, whereas in the Eurozone the inflation problem is almost entirely supply-side.  The ECB seems to be doing a great job.  Keep up the good work Christine Lagarde! 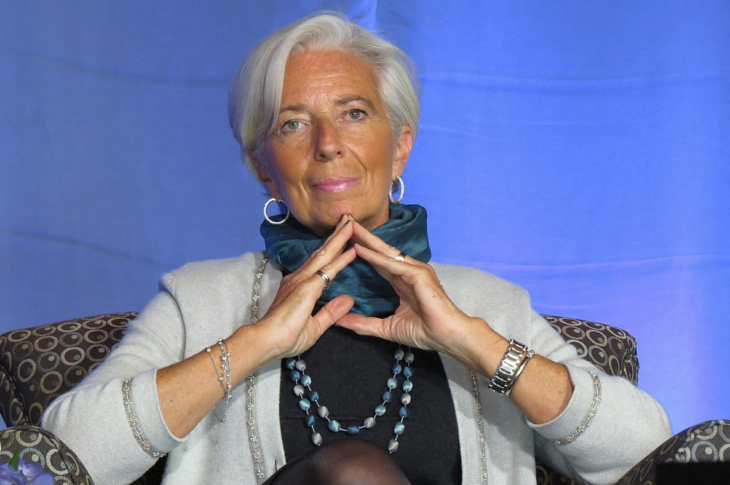 PS.  Like me, she’s 66-years old and is much taller than average.

PPS.  Steve Hanke and John Greenwood pointed out in the WSJ that not all countries suffer from high inflation:

We don’t have a global inflation problem. Inflations are always and everywhere a monetary phenomenon spawned by the creation of excess money by local central banks. China, Japan and Switzerland also face elevated oil prices, supply-chain problems and fallout from the war in Ukraine, but their annual inflation rates are 2.1%, 2.5% and 2.5%, respectively. They have avoided the ravages of inflation because their central banks haven’t produced excessive quantities of money.