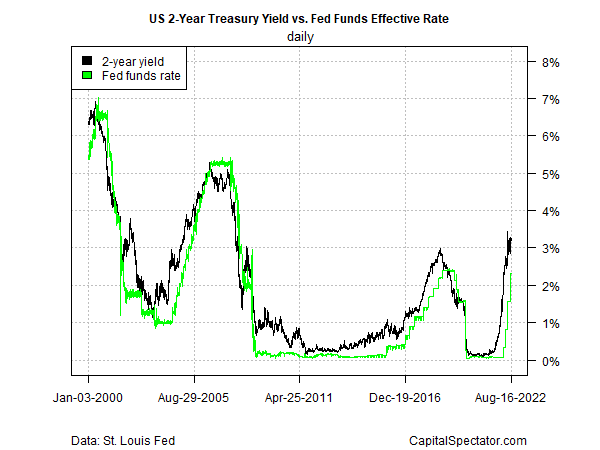 Yesterday’s release of Federal Reserve minutes for the July FOMC meeting reaffirms that the central bank won’t ease off on interest-rate hikes until inflation is tamed. Good thing, too, since the latest inflation data suggests there’s still a long road ahead before policy goals and pricing pressures are aligned. But the Treasury market is always looking ahead and at the moment it seems to be hinting at the possibility that hawkish monetary policy may be close to peaking, based on comparing the 2-year yield with effective Fed funds rate (EFF).

The 2-year rate is thought to be the key maturity for monitoring near-term policy expectations. On that basis, the relationship between the 2-year Treasury yield and the effective Fed funds rate (the rate set by the Fed to guide overnight lending to banks) offers a real-time measure of market expectations relative to current policy conditions.

Notably, the spread between the 2-year rate and EFF has been fallen sharply in recent weeks, which implies that the market’s estimate of the mismatch is easing between where rates should be vs. current levels. That’s a big change from late last year, when the 2-year Treasury yield started rising rapidly while EFF remained unchanged. The widening spread at the time was a forecast that EFF would soon run higher, which followed in due course.

For a clearer view of the relationship, the next chart tracks the spread for the 2-year rate less EFF. In recent weeks the spread’s spike from late-2021/early 2022 has fallen sharply. That’s a clue for thinking that the market’s estimate of the mismatch between where the EFF should be vs. its current level has eased considerably (based on data through Aug. 16).

Given the still-high level of inflation, caution is required for reading too much into the 2-year/EFF spread. Headline consumer inflation, for example, rose 8.5% year-over-year through July, which is far above the Fed’s 2% inflation target. At best, the case for assuming inflation has peaked, or will soon peak, remains mixed.

Nonetheless, the narrowing spread between the 2-year yield and EFF suggests the market is pricing in a closer alignment with where monetary policy should be. That doesn’t preclude more rate hikes, especially if future inflation reports remain hotter than expected. Meantime, another 50- or 75-basis-points increase at the Sep. 21 FOMC is expected, based on Fed funds futures.

Looking ahead beyond Sep. 21, the Treasury market appears to be more comfortable with the possibility that the heavy lifting for Fed hiking has peaked, based on the sliding 2-year/EFF spread. Perhaps that’s because the market is anticipating inflation will soon peak (if it hasn’t already) or that higher interest rates will bring on a recession, which will take the wind out of inflation’s sails.

Forecasts are always subject to uncertainty, of course, and so the 2-year/EFF spread could be misleading. That said, this spread deserves close attention in the weeks ahead. This much is clear: if this spread spikes higher again, the market will be signaling that the Fed’s losing control of the policy/inflation narrative—again. For the moment, however, the crowd appears to be pricing in a degree of progress via Fed policy. Let’s see if that line of reasoning survives in the weeks ahead. 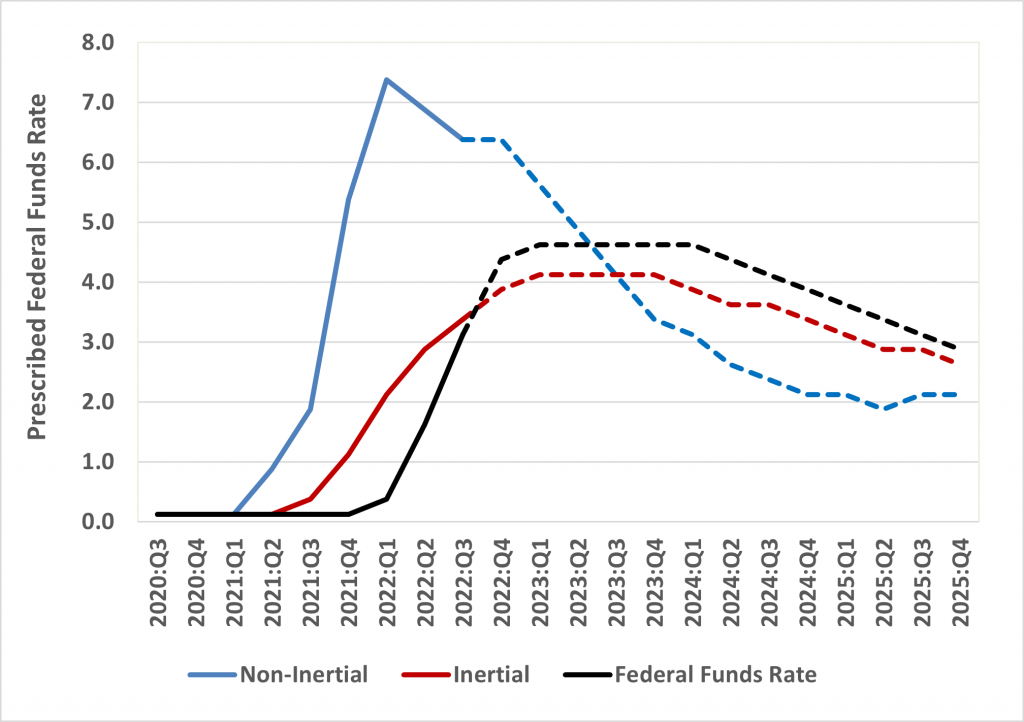 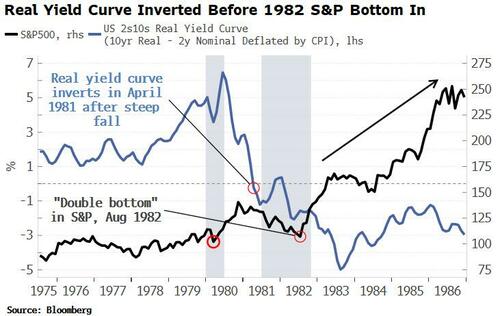 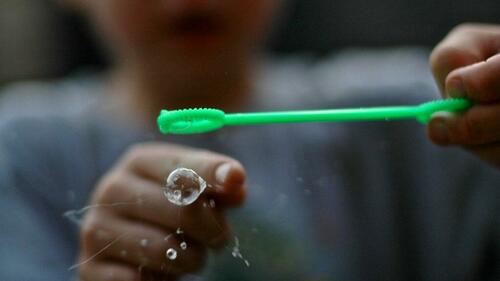 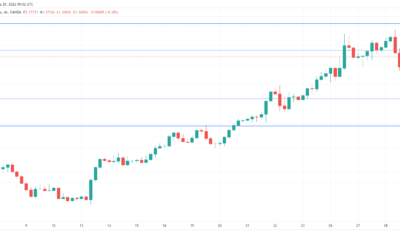 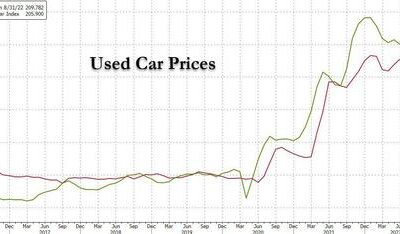