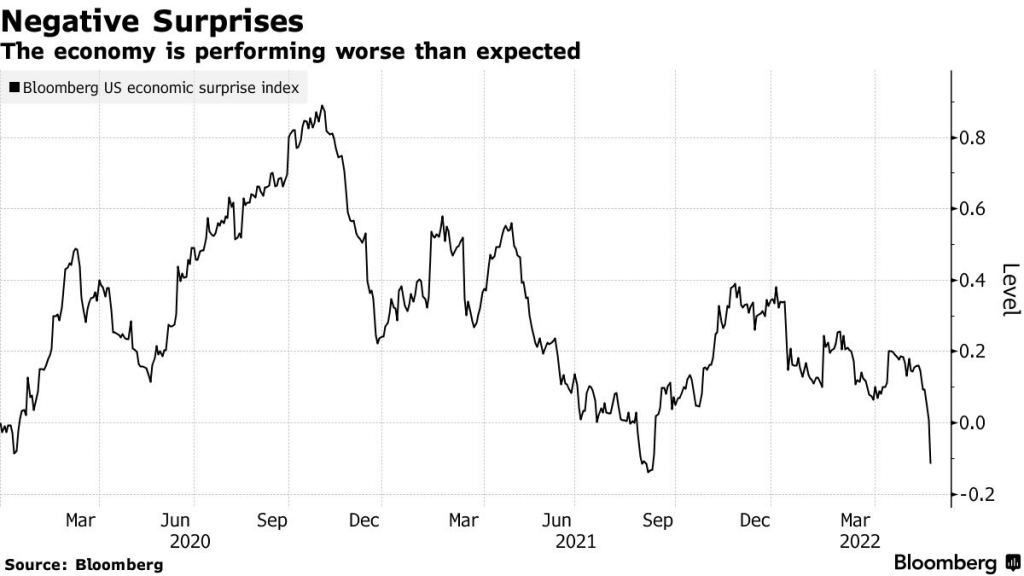 After months of higher Treasury yields, the possibility that rates have peaked is a topical discussion, fueled by easing rates in recent days. Although there are still three trading days to go this week, the widely followed 2- and 10-year Treasury yields look set to post their first run of three-weekly declines this year.

The modest drop in yields may be a temporary lull before the upswing resumes, although analysts are considering factors that may put a ceiling on further increases for the near term.

Perhaps the main catalyst that’s changing sentiment for bonds: an expanding wave of forecasts that US recession risk is rising. “The bond market is clearly putting a greater focus on the risk of a recession and less of a concern on sustained inflation,” says Mark Freeman, chief investment officer at Socorro Asset Management.

Bloomberg notes that US economic data has recently weakened overall, relative to expectations. The change has cut the Bloomberg US Economic Surprise Index to its lowest level since last September.

The Treasury market appears to be entertaining the possibility, iif only on the margins, that growth will stumble. The 10-year Treasury yield fell to 2.76% on Tuesday (May 24), the lowest in over a month. If the benchmark rate holds below last week’s close, it’ll mark the first time since November that the yield has slipped for three straight weeks.

A critical factor, of course, is how long the Federal Reserve raises interest rates. For a clue, let’s start with the policy-sensitive 2-year Treasury yield, which is also showing hints of rolling over (or at least temporarily topping out).

Fed funds futures are still estimating a high probability that the central bank will lift rates again at the June 15 FOMC meeting. The market is currently pricing in a 90%-plus probability for a 50-basis-point hike to a 0.75%-to-1.0% target rate.

But the outlook for additional rate hikes has turned cloudy. Futures are now forecasting a high probability (90%) of no change in rates for the July FOMC meeting.

Inflation’s future path will likely determine what the Fed does beyond the June meeting, which appears to be a done-deal in terms of a 50-basis-point hike. The Treasury market is effectively pricing in next month’s hike, but for now it’s a wait-and-see environment beyond June.

One reason is that there are several hints that the recent surge in US inflation has peaked. Even if true, that doesn’t mean that inflation will return to the low pre-pandemic levels soon. But if inflation data shows more signs of topping out, as it did in April, the Fed may be more inclined to put its rate-hiking plans on hold, at least temporarily. Market sentiment seems to be adjusting to this possibility.

The key debate ultimately centers on US economic strength and on this front there are mixed signals. On the one hand, it appears that output is set to rebound in the second quarter following the contraction in Q1. For example, the Atlanta Fed’s GDPNow model estimates Q2 growth will revive to a moderate 2.4% increase (seasonally adjusted annual rate) from a 1.4% slide previously.

Meanwhile, the New York Fed’s Weekly Economic Index continues to reflect slowing but still moderately positive growth through May 14. The implication: the easing in the US economic trend will take the edge off of inflation in the months ahead.

That’s also the implied message in yesterday’s PMI survey data for this month. “The early survey data for May indicate that the recent economic growth spurt has lost further momentum,” says Chris Williamson, chief business economist at S&P Global Market Intelligence. “Growth has slowed since peaking in March, most notably in the service sector, as pent up demand following the reopening of the economy after the Omicron wave shows signs of waning.”

The critical question is whether the hints of softer growth momentum will continue and translate to a further pullback in inflation from its recent peak – almost surely a necessary event to stay the Fed’s hand in raising rates beyond June.

Key updates to watch start with May inflation numbers, which arrive in a few weeks. The strength (or lack thereof) of the labor market will be closely read too. Next week’s update on nonfarm payrolls is expected to show that hiring slowed in May to a 340,000 monthly increase from 406,000 in April, based on the consensus forecast via TradingEconomics.com. That’s still a relatively solid gain to keep the economy moving forward, but it’s also enough of a slowdown to support the inflation-has-peaked narrative.

For the moment, the bond market’s on board with this view. The question is whether incoming data will give the crowd a reason to abandon this developing narrative?