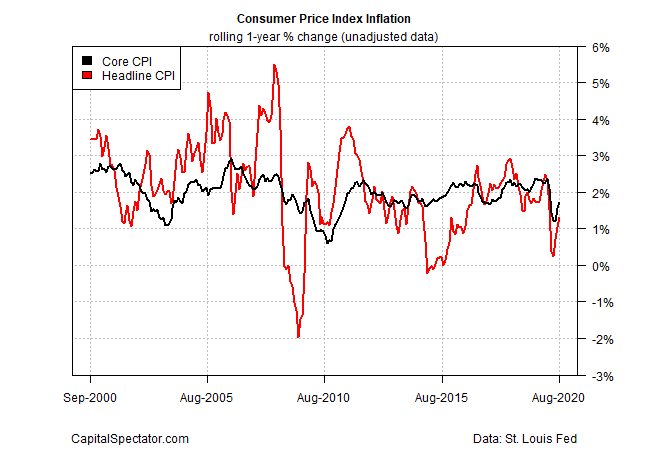 The Federal Reserve yesterday announced that it would keep interest rates near zero for “some time” until the economy generates full employment and inflation is “moderately” above the central bank’s 2% target. Judging by the new economic projections released by the Fed, rates will remain on hold for several years.

Even if inflation runs at a 2% level at some point, the central bank now anticipates that it will be slow to raise rates. “This is dovish – lower rates for longer, higher equities, weaker dollar,” says Jon Hill, senior fixed income strategist at BMO. “The Fed is saying we’re not hiking in 2023, maybe in 2024 … What they’re saying is these are our goals. We expect to have just barely met them and even then, they’re not raising rates.”

Consumer inflation, for example, has slipped well below 2% this year. The core rate of CPI was running at an annual 1.7% in August vs. the year-ago level, based on unadjusted data. The Fed’s current estimates project that core inflation will return to 2.0% on a full-year basis by 2023.

The question is whether keeping the Fed funds target rate near zero for years will lift inflation any time soon? The past decade or so of unusually dovish monetary policy, with minimal upward effect on inflation, leaves plenty of room for doubt.

Albert Einstein supposedly said that the definition of insanity is doing the same thing over and over again and expecting different results. Central bankers the world over are on the defensive for explaining why this description doesn’t apply.

That’s a challenge because explaining why inflation has fallen and remains low, despite the efforts of the Fed, remains more art than science for a simple reason: there are no easy explanations for disinflation’s persistence and it’s hard to solve a problem that you don’t fully understand.

At the core of central bankers’ dilemma is the breakdown in the relationship between employment and inflation, summarized by the so-called Phillips curve, which for decades was the leading chapter in monetary policy’s bible. The working assumption: higher (lower) employment aligns with higher (lower) inflation. But during the 1990s, this link began to weaken and in recent years many economists have started treating it as an artifact of a bygone age.

The historical record speaks for itself. Before the pandemic, the US unemployment rate dropped to 50-year lows (3.5%). According to the Phillips curve model, this should have led to higher inflation. Instead, core CPI remained steady at the 2.0%-2.5% range (also close to 50-year lows) before slipping further during the coronavirus blowback on the economy.

There’s no shortage of explanations to consider. One theory is that the Fed’s inflation-busting credibility with the public is high. Another idea is that globalization has suppressed prices. Ditto for the spread of productivity enhancing technologies. Some analysts also point to weaker bargaining power for workers via the decline of unions.

Another idea is that changing demographics explain low inflation. As populations age in the US and elsewhere, the effect is disinflationary because spending tends to decline after a certain age relative to the consumption habits of the young. The St. Louis Fed, for example, recently noted a negative correlation on a global basis between inflation and the old-age dependency ratio:

All of the above and more probably explain why inflation is low. But figuring out which factors are the leading drivers is devilishly difficult if not impossible. All the more so since the influence of certain factors probably waxes and wanes through time.

It all adds up to a challenging environment for lifting US inflation to a 2% target over a period of time. The Fed hasn’t been able to prevail on this front, despite ramping up efforts to achieve its goals. It’s not obvious that conditions are about to change simply because the Fed announced it would keep rates lower for longer.

Perhaps the dramatically higher level of government spending to address the pandemic will be the inflation-lifting catalyst that’s so far eluded monetary policy efforts. The jury’s still out on this front. But if it turns out that fiscal policy is able to prevail where monetary policy has failed, the regime shift could be awkward for the Fed, which has just spent a huge amount of its credibility capital in promising to hold rates near zero for years.

In other words, be careful what you wish for. A dramatic, sustained rise in inflation at some point in the near future would unleash an entirely new set of challenges for a Fed that appears institutionally unprepared for a revival in pricing pressure.