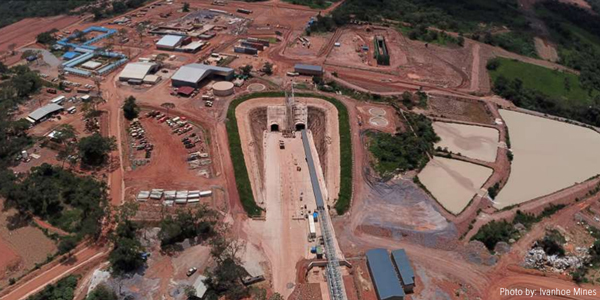 Copper has had an incredible run, surging 45 percent since its March low on plunging global inventories and the prospect of heightened usage by China, its biggest purchaser. It’s also been a good year for one of the world’s top explorers of the red metal, Ivanhoe Mines, which just last week released stellar economic results of its tier-one Kamoa-Kakula Copper Project in the Democratic Republic of the Congo (DRC).

One of our favorite natural resource companies, Ivanhoe has returned more than 146 percent in the past six months alone as investors anticipate the start of production at the Kakula Mine. The project has the potential to become the world’s second-largest copper mining complex, with annual output projected to be 800,000 metric tonnes a year.

We now know approximately when phase one of mining is set to begin. The company is fully funded to begin operations in the third quarter of 2021, according to a press release dated September 8.

“Kakula is on track to begin production in under one year from now, which, considering we’ve been working in Africa for 27 years now, feels like tomorrow morning,” commented Robert Friedland, Ivanhoe’s billionaire founder and co-chairman.

It’s impossible to overstate how exciting the news is. As many of you know, a new mine of this scale and quality doesn’t come online too often these days. The copper grade at Kakula is ultra-high at 6.6 percent over the first five years of production, a grade “that is an order of magnitude higher than the majority of the world’s other major copper mines,” according to Robert.

Sure to please ESG investors, operations at the complex will be powered by clean, renewable hydropower, allowing the company to achieve its goal of becoming the world’s “greenest” copper miner.

As you can see in the chart above, production will continue to ramp up in phases until full processing capacity is reached sometime between 2028 and 2030. This makes Ivanhoe a true long-term play on copper, a metal that should only increase in importance as the “electrification of everything” trend accelerates.

Like copper, shares of Ivanhoe have been on a tear since mid-March. Its stock jumped more than 8 percent last Wednesday following the positive news, its biggest single-day increase since May. The company is now trading at its highest level in seven years, with the best still yet to come. Last week, Canaccord Genuity raised its 12-month price target to C$7.00 ($5.30), a 20 percent increase from where it stands today. 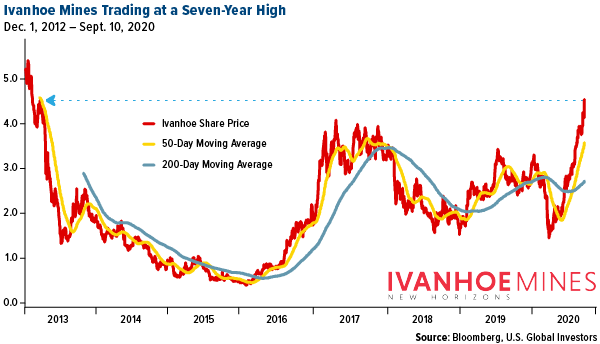 If you recall, Robert visited our office in January 2018. He told us then that you’ll need a telescope to see copper prices in 2021.

He may have been on to something. 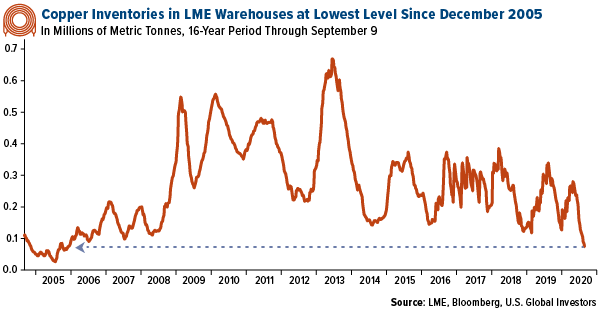 Some analysts see the same market conditions developing that propelled the price of copper up 450 percent between 2000 and 2011, during China’s industrial explosion. As I recently shared with you, manufacturing activity is expanding at a rapid pace, as measured by the purchasing manager’s index (PMI).

Citigroup is extremely bullish, telling clients last week that a price of $8,000 per ton is possible.

With Kakula set to begin production, Ivanhoe is very well-positioned to ride the wave higher.

Greenspan and Druckenmiller Sound the Alarm Over Inflation

Late last month, I asked whether the headline consumer price index (CPI), the government’s preferred measure of inflation, was “fake news.” According to the Bureau of Labor Statistics (BLS), consumer prices rose only 1.3 percent year-over-year in August. An alternate measure, which uses the 1980 methodology for inflation, puts the increase at closer to 9 percent.

Some of you took a poll on our site asking whether you believe the CPI is an accurate reflection of changes in price. An overwhelming majority of you, 86 percent, said that inflation is happening at a much faster rate than what’s being reported.

Now, former Federal Reserve Chairman Alan Greenspan and billionaire investor Stanley Druckenmiller are both sounding the alarm over the prospect of rising inflation.

Speaking to CNBC last Thursday, Greenspan said his biggest concerns going forward were inflation and the expanding budget deficit. “My overall view is that the inflation outlook is unfortunately negative and that’s essentially the result of entitlements crowding out private investments and productivity growth,” the “Maestro” told the network.

Greenspan has long criticized the rising cost of entitlements such as Medicare and Medicare, calling them a drain on capital reserves.

Also speaking to CNBC last week, Druckenmiller said he believes inflation (as measured by the CPI) could hit between 5 percent and 10 percent in the next four to five years, thanks in large part to the Fed’s unprecedented levels of money-printing.

Near-zero rates have sent valuations soaring, according to Druckenmiller, who says that the market is “in a raging mania.”

“Everyone loves a party, but inevitably after a big party there is hangover,” he added.

Current Fed Chair Jerome Powell recently unveiled the central bank’s new approach to managing inflation, saying changes in prices would average 2 percent over time. The implication is that the Fed would allow inflation to run hot in some instances. To get there, rates will likely remain at zero for some time longer.

Meanwhile, the amount of assets on the Fed’s balance sheet has surged to more than $7 trillion. Combined with balance sheets of other major central banks—the European Central Bank (ECB), Bank of Japan (BoJ) and People’s Bank of China (PBOC)—total assets are currently above an unbelievable $25 trillion. 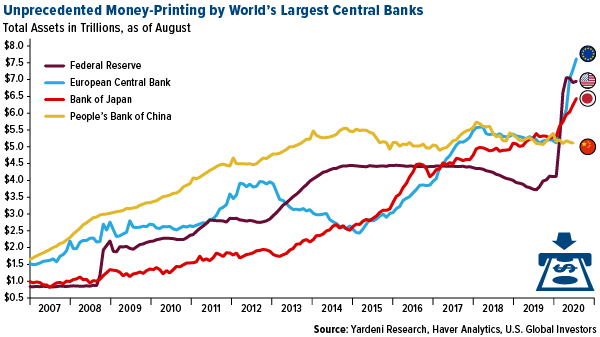 On the fiscal side, world governments have so far announced $20 trillion in stimulus measures in response to the global pandemic.

Much of this new cash has flowed into ETFs, whose assets under management (AUM) have hit $7 trillion for the first time ever. Global investors have ploughed as much as $428 billion into ETFs so far in 2020 through the end of August, a 57 percent increase from the same eight months last year, according to the Financial Times.

But with the risk of currency devaluation higher now than it’s been in recent memory, it’s crucial that investors get exposure to gold and other hard assets using the 10 Percent Golden Rule.

Coincidentally, Greenspan and Druckenmiller are both fans of the yellow metal as a portfolio diversifier, not to mention other heavyweights including Bridgewater’s Ray Dalio, Paul Singer and Paul Tudor Jones. And don’t forget that none other than Warren Buffett himself, who has long derided the asset, took a stake in a gold producer for the first time, disclosing a $565 million position of Barrick Gold as of June.

The price of gold is around 6 percent off its all-time high, making now an incredible buying opportunity. Today, analysts at Citi raised their 2021 gold price forecast some $300 an ounce and believe the metal could average $2,500 in 2021, with a target of $2,200 over the next three months and one of $2,400 over the next six to 12 months. A weaker U.S. dollar and heightened macro uncertainty should serve as support, Citi says.

I maintain my call for $4,000 gold in the next three years due to record stimulus spending and money-printing, which may lead to extreme currency debasement. Get my full thoughts by watching my interview with CNBC below, and make sure to like and subscribe to our YouTube channel!

Holdings may change daily. Holdings are reported as of the most recent quarter-end. The following securities mentioned in the article were held by one or more accounts managed by U.S. Global Investors as of (06/30/2020): Ivanhoe Mines Ltd., Barrick Gold Corp.