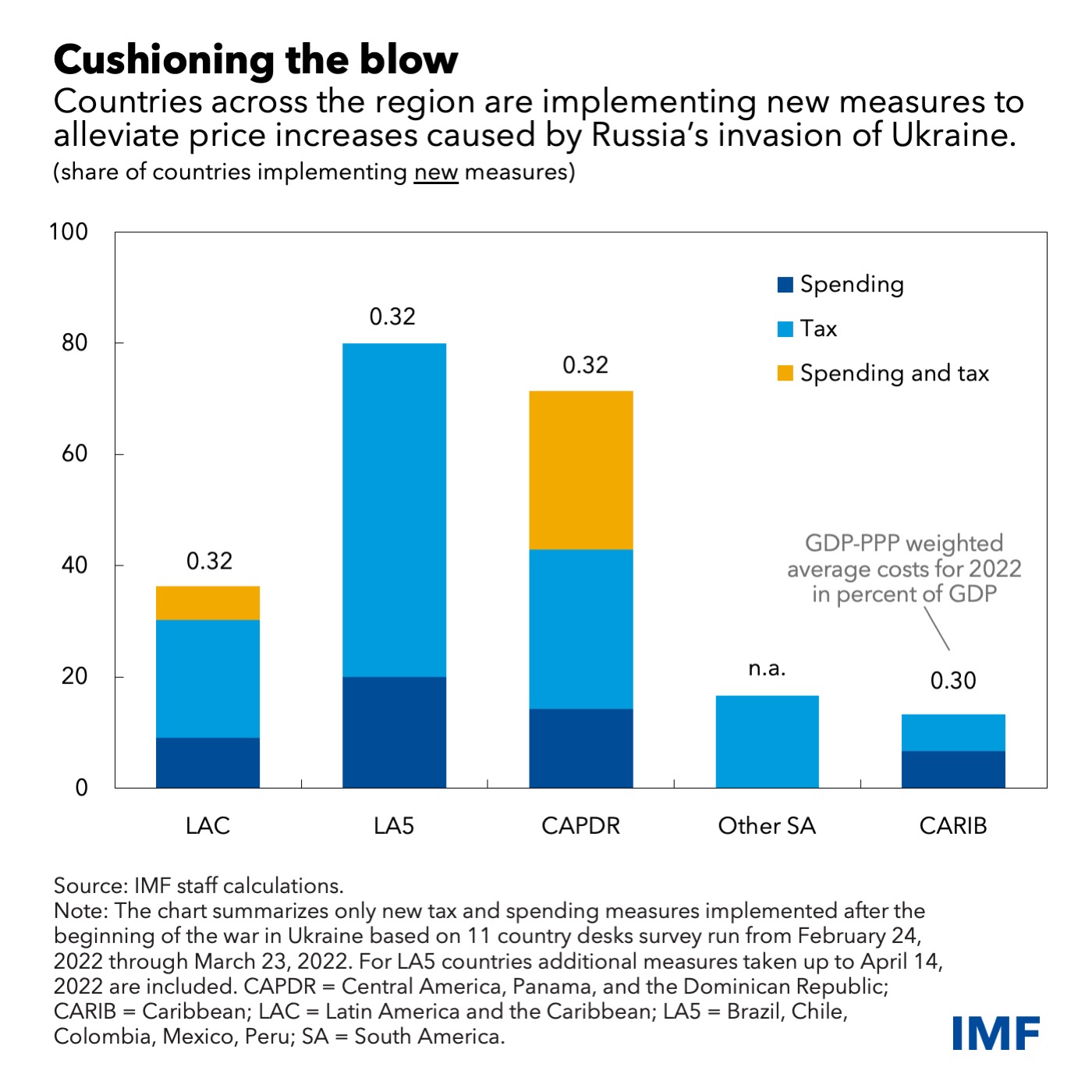 The war in Ukraine is shaking the global economy and raising uncertainty about the outlook for Latin America and the Caribbean.

The impact is being felt in Latin America through higher inflation that is affecting real incomes, especially of the most vulnerable. Policymakers are reacting to this challenge by tightening monetary policy and implementing measures to soften the blow on the most vulnerable and contain the risks of social unrest.

But there are other risks looming. A possible escalation of the war could eventually lead to global financial distress and tighter financial conditions for the region.

In addition, the ongoing tightening of monetary policy in the United States, as the Federal Reserve takes a more hawkish stance, could eventually affect global financial conditions.

Higher global and domestic financing costs can accelerate capital outflows and represent a challenge for the region, given large public and external financing needs in some countries and the limited resources to finance investment in the region.

Any greater growth deceleration in China, because of the pandemic or other reasons, could also have an impact on key export prices and trade in the region. All these risks cloud growth prospects for Latin America and require policy action.

Even before the war, the region’s recovery from the growth-sapping pandemic was losing momentum. After a sharp rebound last year, growth is returning to its pre-pandemic trend rate as policies shift, slowing to 2.5 percent for 2022. Exports and investment are resuming their role as main growth drivers, but central banks have had to tighten monetary policy to combat an increase in inflation.

We forecast Brazil’s expansion will slow to 0.8 percent this year following last year’s growth of 4.6 percent. Mexico will decelerate to 2 percent. Colombia will likely post a lower deceleration with growth at 5.8 percent. Growth in Chile and Peru will be 1.5 percent and 3 percent, respectively, pointing to very significant reductions relative to their prior year’s double-digit rates.

Poverty and inequality remain key concerns as well given that the increase in inflation has an uneven impact on the population. The most vulnerable groups in the region are being hit hard by the increase in basic food and energy prices, while still struggling to recover from the economic impact of the pandemic.

Indeed, since the war began, several countries in the region have acted to contain the effects of rising prices on vulnerable groups—ranging from tax and import tariff reductions to price caps or social transfers.

Close to 40 percent of countries have introduced new measures, mostly on the tax side, with an estimated average fiscal cost equal to 0.3 percent of gross domestic product for this year.

To ensure social cohesion and reduce the risk of social unrest, governments should provide targeted and temporary support to low-income and vulnerable households, while allowing domestic prices to adjust to international prices. This would help vulnerable groups and contain fiscal costs, while also incentivizing production and restraining consumption. In countries with well-developed social safety nets, access could be expanded to temporarily cover larger groups of the population.

Where safety nets are not well developed, governments can implement temporary mechanisms to smooth the pass-through of international price surges to domestic prices. Although this strategy would protect households from the volatility of commodity prices, it may also have a significant fiscal cost while distorting price incentives for consumers and producers.

Countries benefiting from improvements in their terms of trade—a measure of prices for a country’s exports relative to its imports—may find it easier to finance these new measures. However, any additional fiscal space should be used wisely given the unusually high risks surrounding the global recovery and the evolution of commodity prices, as well as the increasing costs for government financing.

With public debt-to-GDP ratios above pre-pandemic levels and borrowing costs rising amid higher local and global interest rates, countries will need to ensure the sustainability of public finances to help preserve credibility and rebuild fiscal space. However, it will be equally important to implement measures that protect the most vulnerable.

This will require a strategy that focuses on inclusive consolidation. Spending on social programs, health, education, and public investment should be protected, while implementing tax reforms (such as strengthening personal income taxes) that will bolster growth in an inclusive manner and help countries maintain fiscal sustainability.