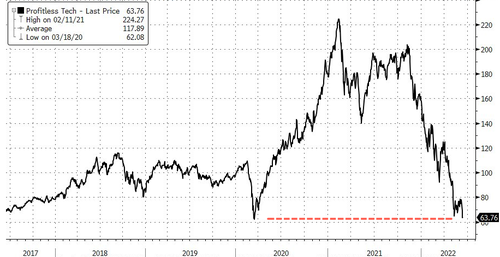 During an appearance on CNBC Tuesday morning, hedge fund titan Leon Cooperman insisted that he believes the stock market is in a “bear market” and a recession will materialize “sometime in 2023,” echoing earlier warnings from the Coinbase CEO.

Cooperman, who started speaking just one day after the S&P 500 tumbled into a technical bear market, said stocks “are in a bear market — we’ve gone through one of the most speculative periods I’m aware of: SPACs and all that kind of crap that was going on. Crypto, and NFTs…I think it will be unlikely to go back into a bull market anytime soon.”

“It’s a bear market,” says Lee Cooperman. “We’ve gone through one of the most speculative periods I’m aware of: SPACs and all that kind of crap that was going on. Crypto, and NFTs…I think it will be unlikely to go back into a bull market anytime soon.” pic.twitter.com/w2wNmxAZwF

Cooperman said, “the bubble was in fixed income and FANGs, which have been destroyed.” He said he doesn’t own any profitless technology companies but follows them and named a few that are down more than 80-90%.

“These are enormous declines — and this is the whole Meme-game — we saw extraordinary speculation — and I’m quite confident this stuff doesn’t go away very quickly — it’ll leave scars.”

“These are enormous declines–this whole meme game,” says Lee Cooperman. “I think @CathieDWood is a very bright lady–but my guess is she will have outflows at the bottom, not inflows she is experiencing now.” pic.twitter.com/5zOjcOD61I

“I’m assuming by the time this is over, if we fall into a recession, the market could fall 40% from its peak,” he said, adding that he only wants to own dividend stocks or ones with strong balance sheets.

Cooperman, like Stanley Druckenmiller, another legendary investor, recently warned about a continued bear market in stocks and a recession in 2023. Meanwhile, JPMorgan’s Marko Kolanovic believes “a recession will be avoided.”

COOPERMAN TELLS CNBC THINKS WE ARE GOING TO HAVE A RECESSION

In April, Cooperman joined CNBC and said stocks have “a lot of room to the downside” and even compared the macro backdrop for contemporary markets to the period between the late 1960s and 1980s when stagflation drove the US equity market into a decade-long secular bear market.

“The market has a lot of room for downside,” says Leon Cooperman. pic.twitter.com/BQo3kHu5BW

Last week’s hotter-than-expected US CPI print, which heaped pressure on the Federal Reserve to step up monetary tightening — accelerated S&P 500 into a bear market on Monday.

Panicked rate traders now bet the Fed will hike 11 times through the end of the year with implied fed funds around 3.63%. Barclays and Jefferies predict the Fed could unleash one 75 bps hike as soon as this week. If that comes to pass, it would be the first time since 1994 that the Fed resorted to such a draconian measure.

An aggressive Fed, tightening rates in an economy where economic data is decelerating plus an energy shock is a recipe for recession and could prove Cooperman right… and with inflation expectations becoming unanchored (see UMich inflation expectations last week), Fed credibility is at stake once again as Powell and his pal face their nemesis – stagflation – forced by out of control inflation to hike into a slowdown.

The market – for now – expects a recession and is pricing in 3 rate-cuts from next year as The Fed is expected to save the world again.