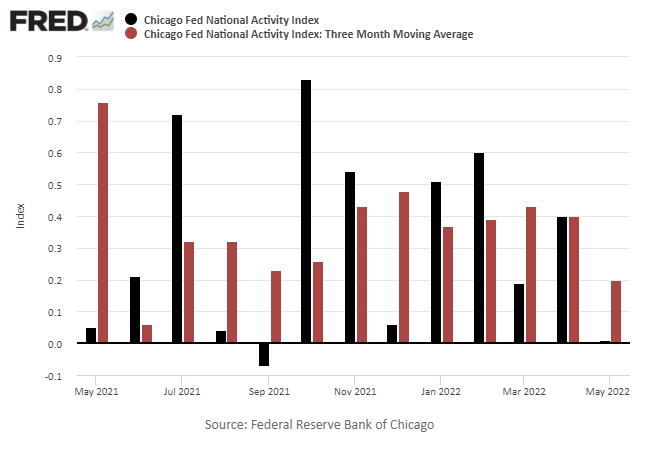 * Tensions rising between Moscow and NATO over Russia’s Kaliningrad enclave
* Japan on high alert amid activity by Chinese and Russian warships near its coast
* IEA warns Europe to prepare for total shutdown of Russian gas exports
* Russia earns more oil revenue than before war due to China and India
* Biden expected to call for 3-month suspension of gas tax
* Fed expected to lift rates by 3/4 percentage point again in July
* UK inflation ticks up to new 40-year high: +9.1% annual pace in May
* Existing home sales in US fell for fourth straight month in May
* US growth slowed in May via Chicago Fed business-cycle index:

The rate of new US job posts has eased in recent weeks, according to Indeed.com, a career website. Companies “don’t want to talk about a hiring freeze, but what they are doing is adding an extra layer of scrutiny, like saying only the CEO can approve these jobs,” says David Vied at consulting firm Korn Ferry. “There is this stealth slowdown.”

Former NY Fed Governor Bill Dudley predicts a US recession is inescapable. “If you’re still holding out hope that the Federal Reserve will be able to engineer a soft landing in the US economy, abandon it. A recession is inevitable within the next 12 to 18 months,” he writes.