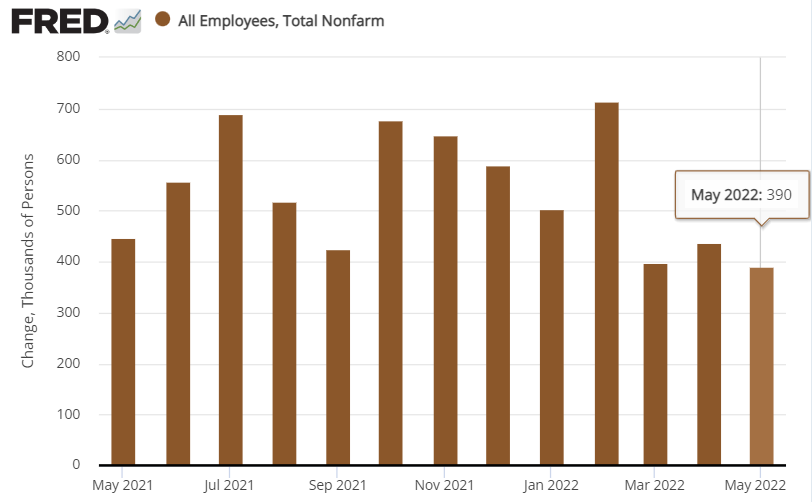 * Russia strikes Kyiv with missiles as Putin warns West on arms
* US and S. Korea launch missiles in response to N. Korea missile launches
* US can avoid a recession if the Fed’s policy choices are timely and effective
* Cleveland Fed president says series of aggressive rate hikes needed
* US services sector growth eases to slowest pace in over a year in May
* Solid gain in US payrolls in May keeps Fed on track for 50-basis-point rate hikes
* US payrolls growth remains strong in May, rising 390,000:

Economic risks have increased for the US, but “the recession conversation appears to have gotten a little ahead of itself,” advise the economics team at Wells Fargo. US macro strategist at Truist Advisory agrees, explaining that “we’re not saying risks haven’t increased,” but “all the conditions were very favorable [for consumers], and now they’ve gotten less favorable than that. But that doesn’t mean it’s a recession.” Michael Skordeles says consumers are still holding a lot of cash, in part due to to pandemic stimulus. Meanwhile, a strong labor market is supporting household balance sheets. Fed rate hikes will create “uneven” conditions and so the economic expansion is “not gonna be a straight line. We expect continued volatility,” Skordeles explains. “But I think we get past it.”

US wage growth, a key driver of inflation, “has likely passed its peak and is slowing despite strong demand for workers,” advise analysts via Peterson Institute for International Economics.

The US economy is slowing, but not enough to substantially lower inflation, writes Chris Rupkey at fwd:Bonds. “There are still dangers out there where the storm warnings for the economy could change to hurricane alerts if the Fed overdoes it with too many rate hikes. But the bottom line is the economy is miles away from being wrecked on the shores of recession with the economy continuing to hire workers at this fast of a clip.” He adds that “Fed officials are human and it looks like they are close to losing patience with the persistence of inflation that wrecks all the economy’s boats. For today, the economy is not slowing enough to put the inflation fire out. Bet on it. The bond market is.”

US consumer price inflation for May is scheduled for release on Friday and is “sure to fan the ongoing debate over what is fueling the painfully high inflation,” advises Mark Zandi, chief economist with Moody’s Analytics. One factor that’s not front and center: unusually strong demand, he explains. “Consumer spending during the pandemic has grown much as it did prior to the pandemic. Rather, “Behind the high inflation is the pandemic, which continues to scramble global supply chains and labor markets, and the Russian invasion of Ukraine, which has caused oil and other commodity prices to spike. Consistent with this is the high inflation across much of the planet.”

Is the US economy headed for a soft landing that trims inflation without triggering a recession? That’s a possibility, based on the latest ISM Services Index for May, writes Bloomberg’s John Authers. “To bring down inflation without crashing the economy, we need to see data grow steadily less positive without plunging through the floor. Another month on, and it still looks possible. The latest ISM supply manager surveys suggest that the services sector has cooled significantly. But both manufacturing and services remain comfortably above the 50 level that marks the difference between expansion and recession:”