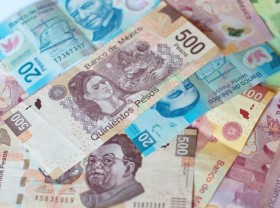 The Mexican peso is weakening against its US peer on Tuesday, joining the broader decline among Latam currencies. The peso failed to trend higher amid rising inflation and the Supreme Court striking down the government’s reform proposals. Investors are also monitoring the nation’s vaccine rollout that has been described as “disastrous” among observers, with the president promising to have enough vaccines to treat all seniors.

In January, the inflation rate surged 3.54% year-over-year, higher than the market forecast of 3.46%. This is up from the seven-month low reading of 3.15% in December. On a monthly basis, the consumer price index (CPI) rose 0.86%, and the core inflation rate jumped 0.36%.

Automobile production contracted at an annualized rate of 15.1% last month, down from the 18.4% gain in December. Vehicle exports slumped 6.4% year-over-year in January, down from 16.1% in the previous month.

Consumer confidence edged up to 38.4 in January, up from 38.1 in December — anything below 50 indicates contraction.

Foreign exchange markets were monitoring the potential political upheaval forming in Mexico. The Supreme Court struck down key elements of the government’s reform agenda. One idea was to give the state-run electricity provider an edge in the sector, which private businesses had criticized.

The mishandling of the COVID-19 pandemic has market analysts bearish on the nation’s economic prospects. Although the seven-day average of coronavirus infections fell below 10,000 for the first time in a month, reports suggest that the country’s vaccine program launch has been disastrous, with some calling it “a placebo.”

President Andrés Manuel López Obrador has also faced criticism for refusing to wear a face mask following his COVID-19 recovery. He returned after completing his treatment, vowing not to force the population to wear masks.

There is no authoritarianism in Mexico … everything is voluntary, liberty is the most important thing. It is each person’s own decision.

I came through well, healthy. We are back on our feet again, in fighting style.

AMLO reassured the nation that Mexico will import enough vaccines from Pfizer, Russia, China, and India to inoculate all Mexicans over 60 by the end of next month.