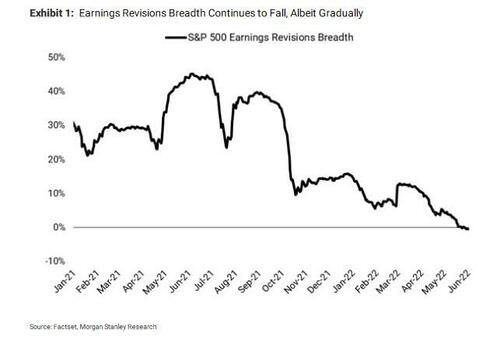 Mike Wilson: Bear Market Rally Will Last A Few More Weeks, But Then S&P Will Sink To 3,400 By Mid-August

After relentlessly (and correctly) hammering the market for the past year in his bearish weekly commentary , one sometimes wonders what new fire and brimstone Morgan Stanley’s Michael Wilson will unleash on any given Monday when the latest edition of his periodical “Weekly Warm-up” hits the press. Well, for those waiting with bated breath what Mike will pull out of his sleeve today, we again have the answer: this time he takes aim at the negative earnings revision cycle (bad news) and the strong US dollar (not that bad, mostly priced in), and concludes that while “stocks may rally further in the near term, especially if there is some kind of cease fire in the Russia/Ukraine war” even if that were to happen, Wilson does not think it “reverses the Fire and Ice that is now well established but incomplete”, and the bear market that began a few weeks ago “can continue for a few more weeks until the Fed makes it crystal clear they remain hawkish, and earnings revisions fall well into negative territory”, a combination which should “take the S&P toward 3,400 by mid-late August.”

Picking up on a familiar topic, one which he has covered extensively in recent months, Wilson begins by noting that over the past several months, he has been highlighting the declining trend in earnings revision breadth, and having thought it would turn outright negative during Q1 earnings season “that’s where we are.”

However, as he adds, it’s been a slow bleed toward 0% which is why forward 12 month EPS estimates continue to grind higher for the S&P 500. That said, if one backs out Energy (which as we noted earlier remain extremely cheap) and Materials, the NTM EPS forecasts are starting to consolidate.

Looking at the chart above, Wilson says that a key question for investors is whether they should pay a lower multiple for earnings growth derived to a notable extent from deeply cyclical sectors like Energy and Materials. And while the MS strategist would argue the answer is ‘yes’, with the equity risk premium back to 290bps, the market disagrees with that view or is clinging to the idea that earnings growth from the rest of the market will reaccelerate later this year. In any case, Wilson is still of the view that “EPS forecasts will come down.”

Which feeds into Wilson’s next key point that even market generals such as MSFT and AAPL are starting to see negative revisions this past week: in the case of MSFT, the company blamed the strong dollar; for AAPL, it’s the more highly valued services business that is likely to disappoint, according to Morgan Stanley analysts (full notes available to pro subs).

Of course, as they tend to always do until too late, equity markets ignored these revision warnings with both stocks holding in, and the S&P 500 equity risk premium moving lower last week. Obviously, Wilson notes, some might argue these revisions were already priced with the stocks down more than 20% YTD: “In short, the earnings risk is now understood and priced so the market is looking forward to better growth next year. In the absence of further revisions in the near term, that view can hold up for now.”

However, if – as Wilson believes – earnings revisions don’t reaccelerate, “the price remains wrong with the equity risk premium at 290bps” as compared to Wilson’s fair market value of 345bps. This is why the MS strategist still thinks it will be difficult for the equity market to make much upward progress this summer/fall from current levels.

In other words, either the price needs to come down to reflect the earnings risk or the estimates need to fall, and Wilson thinks both will happen over the course of 2Q/3Q earnings season as companies come to the confessional one by one. With MSFT highlighting the risk from currency, investors hoping for a quick reversal of earnings revisions breadth may be disappointed.

However, Wilson also appreciates that it may take some time for these confessionals to work their way through official forecasts — i.e., 2Q earnings season remains 4-6 weeks away, and in the absence of a recession or a shock like the COVID lockdowns, negative earnings revisions typically take longer than they should, and this time is likely to be no different.

Putting it all together, Wilson actually is not nearly as gloomy and doomy as he was in recent weeks, and says that he “remains open minded to the idea of stocks hanging around current levels and even rallying further in the near term, especially if there is some kind of cease fire in the Russia/Ukraine war.” However, even if that were to happen, Wilson does not think it reverses the Fire and Ice that is now well established but incomplete.

The bottom line: Wilson warns that the bear market rally that began a few weeks ago can continue for a few more weeks until the Fed makes it crystal clear they remain hawkish, and earnings revisions fall well into negative territory—a dynamic that seasonals should support.

It is this combination that drains optimism from the bulls week after week, that should ultimately take the S&P 500 toward 3400 by mid/late August, according to Morgan Stanley.

Finally, taking the currency risk a step further, Wilson looked at what stocks are most/least sensitive to moves in the US dollar. The results are shown below.

In other words, at the stock level, there may not be nearly as much currency risk as there is at the index level.

The full Wilson note as other mentioned reports are available to professional subs in the usual place.