Money supply growth fell again in October, dropping to a thirty-nine-month low. October’s drop continues a steep downward trend from the unprecedented highs experienced during the thirteen months between April 2020 and April 2021. During that period, money supply growth in the United States often climbed above 35 percent year over year, well above even the “high” levels experienced from 2009 to 2013.

The growth rates during most of 2020, and through April 2021, were much higher than anything we’d seen during previous cycles, with the 1970s being the only period that came close. Since then, however, we have seen a fast fall from previous highs and such rapid declines generally point to economic contraction in the following months. October’s money supply growth rate is now similar to what was experienced during late 2019 and early 2007.

The money supply metric used here—the “true,” or Rothbard-Salerno, money supply measure (TMS)—is the metric developed by Murray Rothbard and Joseph Salerno, and is designed to provide a better measure of money supply fluctuations than M2. The Mises Institute now offers regular updates on this metric and its growth. This measure of the money supply differs from M2 in that it includes Treasury deposits at the Fed (and excludes short-time deposits and retail money funds).

Notably, this happened again beginning in May of this year as the M2 growth rate fell below the TMS growth rate for the first time since 2020. Put another way, when the difference between M2 and TMS moves from a positive number to a negative number, that’s a fairly reliable indicator the economy has entered into recession. We can see this in this graph: 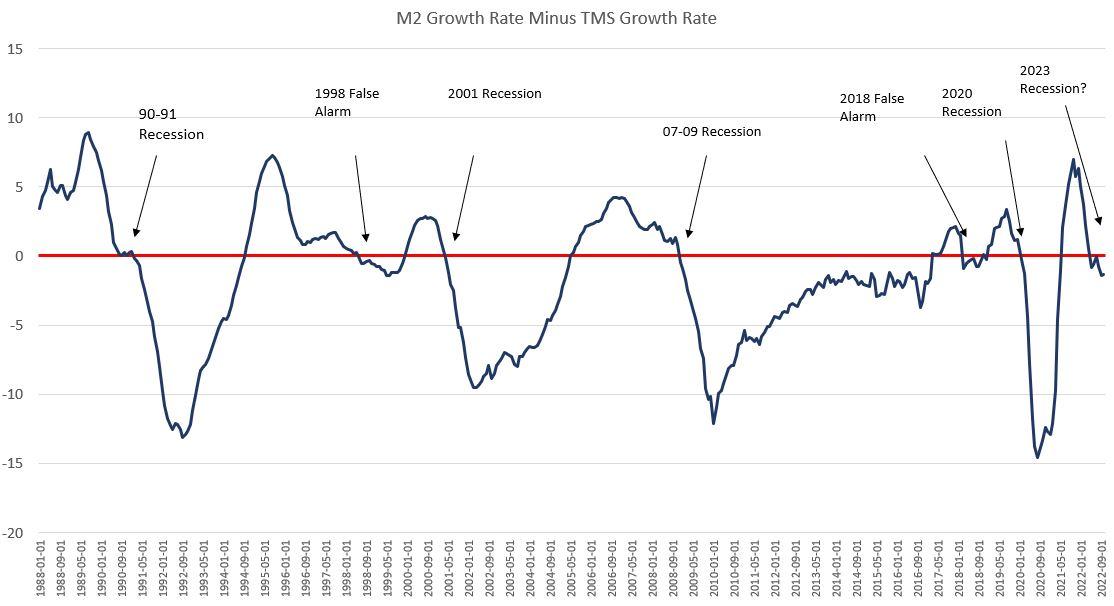 In the two “false alarms” over the past thirty years, the M2-TMS gap reverted to positive territory fairly quickly. However, when this gap firmly enters negative territory, that is an indicator that the economy is already in recession. The gap has now been negative for six months in a row. Moreover, the gap in October was –1.34, and has been below -1 for two months in a row. There is only one case—1998—in more than thirty years during which the gap was greater than –1 and the US not in recession.

Signs of recession continue to mount. Official gross domestic product (GDP) numbers show the economy contracted during the first half of 2022. Further signs of a slowing economy can be seen in the employment and home sales data. New housing construction has already turned downward after a boom in early 2022. Meanwhile, the total number of employed workers and real wages fell in October.

The M2-TMS gap also appears to follow the pattern of yield curve inversion, which itself is a strong sign of impending recession. For example, the 2s/10s yield inversion went negative in all the same periods where the M2-TMS gap pointed to a recession. Moreover, the 2s/10s inversion was very briefly negative in 1998 and then almost went negative in 2018. This is not surprising because trends in money supply growth have long appeared to be connected to the shape of the yield curve. As Bob Murphy notes in his book Understanding Money Mechanics, a sustained decline in TMS growth often reflects spikes in short-term yields, which can fuel a flattening or inverting yield curve.

It’s not especially a mystery as to why short-term interest rates are headed up fast, and why the money supply is decelerating. Since January of this year, the Fed has raised the target federal funds rate from 0.25 percent up to 4.00 percent. 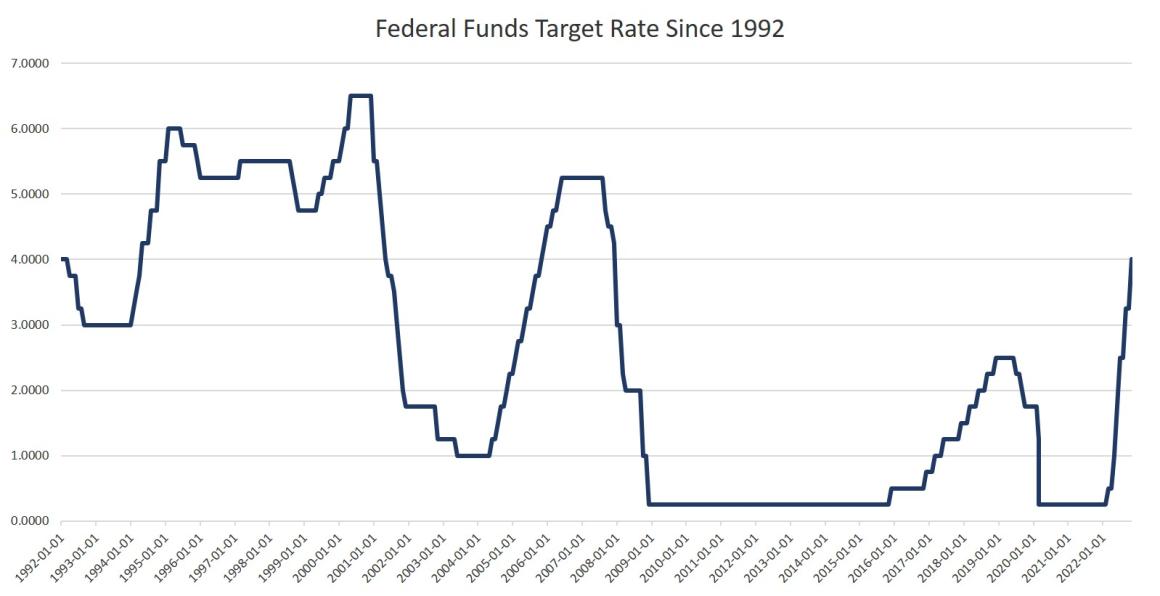 This means fewer injections of Fed money into the market through open market operations. Moreover, although it has done very little to actually reduce the size of its portfolio, the Fed has nonetheless stopped adding to its portfolio through quantitative easing and allowed a small amount ($344.0 billion out of $8.9 trillion) to roll off. Consequently, market interest rates have headed upward and money supply growth has decelerated. Economic pain is likely to follow. 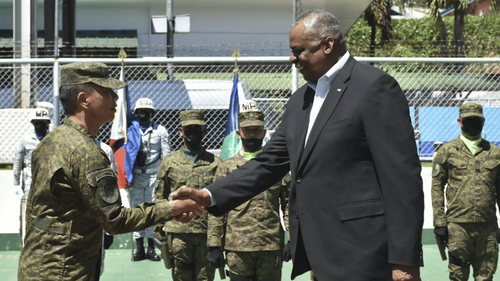