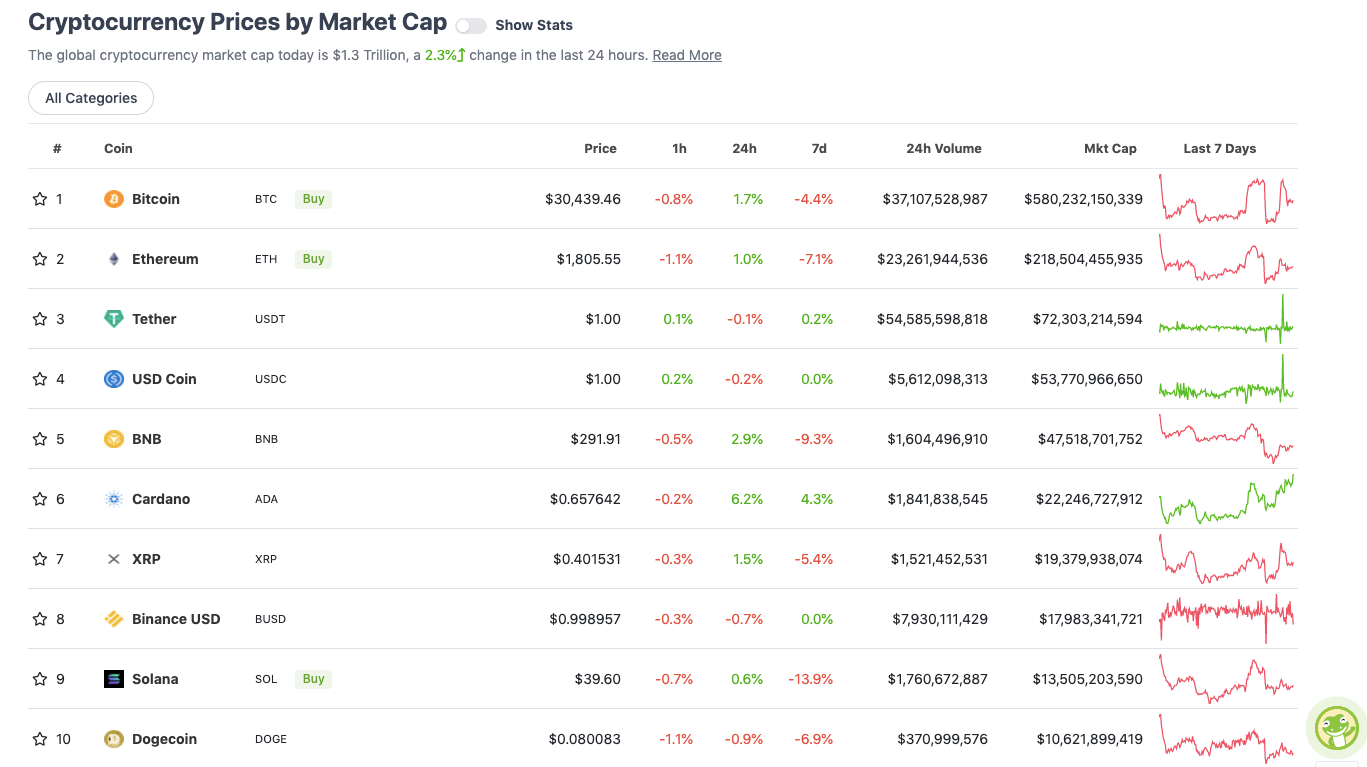 As Ethereum moves closer to its “Merge”, Bitcoin is apparently in “Bart season” with BTC’s price movements lately resembling the upright or inverted spiky head of the Simpsons character.

And that’s been indicative of some particularly choppy waters, and unpredictability, that’s been keeping day traders on their toes all week. Whale games at play? Maybe.

That said, over the past 10 hours or so, at the time of writing, the OG asset has been travelling above US$30k and below $31k, so there’s at least a bit of a consolidation-range respite forming there again. Wouldn’t bet on that lasting too long before another dramatic move, though.

With the overall crypto market cap at roughly US$1.3 trillion, up about 2.3% since this time yesterday, here’s the current state of play among top 10 tokens – according to CoinGecko.

Bitcoin’s ranging conditions today appear to be a “no-trade zone” for Dutch analyst Michaël van de Poppe, who wants to see a breach of US$31.5k for any momentum further north on the charts…

In between = no trade zone. pic.twitter.com/Q1UfSFFH8r

Cardano (ADA), meanwhile, is still the out-and-out top 10 crypto performer of the week – up 4.3% over the past seven days, and more than 6% in the past 24 hours. Why? See yesterday’s Mooners and Shakers column for that explanation – it still applies.

A step closer to Ethereum’s Merge

Next in line to Bitcoin’s crypto crown, Ethereum (ETH) is travelling along fairly flat, but generally okay today as well.

The trial of the protocol’s upgrade is set to occur on the Ropsten public testnet. And whether this is a short-term price mover or not doesn’t really matter to the many Ethereum faithful, who view the eventual transition as the most significant, positive, crypto event of the year.

That’s because the new PoS model is designed to solve some of Ethereum’s biggest issues, such as high transaction costs and the network’s ability to scale.

This Twitter thread from, erm, “PastryEth” is an excellent, if highly technical explainer…

It’s a big day for Ethereum.

Within the next 24 hours, the Ropsten network will undergo The Merge.

This marks the final phase of testing before deployment on mainnet.

The thread goes into plenty of detail, but if you want the TLDR angle… maybe just the benefits of the Merge, here they are:

• “The switch to PoS will signal the end of PoW Ethereum and start the era of a more sustainable, eco-friendly blockchain. In fact, it is estimated PoS will use 99.5% less energy than PoW.”

• “Additionally, The Merge will cause massive changes in supply/demand forces for ETH Immediately following it, issuance will reduce by over 90%, and millions in daily sell pressure will be replaced with buy pressure. This is the equivalent of 3 BTC halvings.”

The actual mainnet Merge itself is scheduled to happen some time in August.

Sweeping a market-cap range of about US$10.2 billion to about US$492 million in the rest of the top 100, let’s find some of the biggest 24-hour gainers and losers at press time.

If #bitcoin is not going to zero then it’s going to a million. pic.twitter.com/uY673NAMPf

Paul Krugman says #Bitcoin is like the Housing Bubble.

Paul Krugman also said the internet was like the fax machine.

BREAKING: Fidelity and Citadel are building a crypto trading platform

This is your daily reminder that #Bitcoin in your exchange account, isn’t *really* yours… pic.twitter.com/mFwAl1KWl7

The post Mooners and Shakers: Ethereum Merge upgrade all set for testnet; Bitcoin consolidates above $30k appeared first on Stockhead.