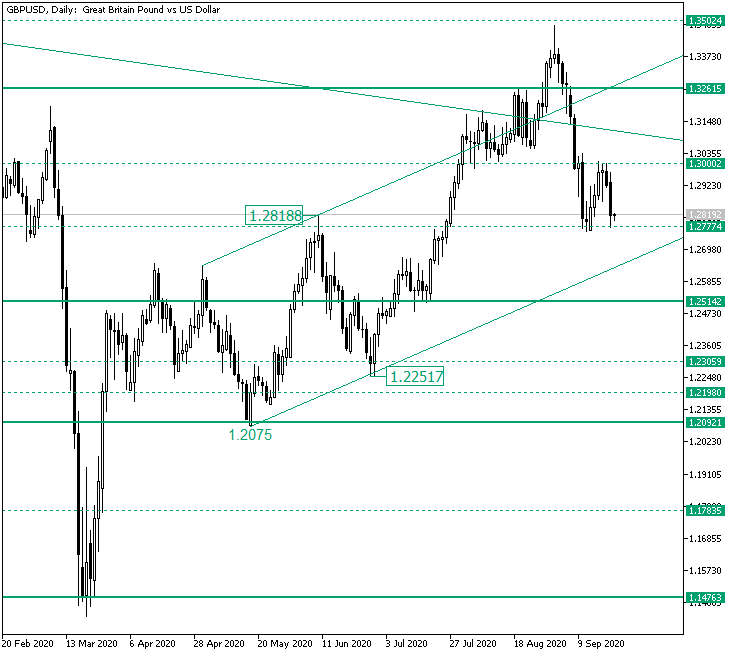 The Great Britain pound versus the US dollar currency pair, after the last drop, seems to be governed by the bears. Can the bulls turn the situation in their favor?

The rally that started after the validation of 1.1476 as support began an ascending trend that extended a hair away from 1.3502.

Prior to the last upwards leg, the currency pair found itself above the 1.3000 intermediary level (which happens to be a psychological level as well) and under the triple resistance defined by the descending trendline, the upper line of the ascending channel, and the 1.3261 firm resistance area.

The 1.3000 intermediary level facilitated a new rise which, even if it managed to pierce the aforementioned triple resistance and depart from it, it ended up as a false piercing, as it returned under the resistance.

Moreover, the fall tried but failed to find support at the 1.3000 psychological level, as the invalidated pin-bar on September 3 highlights. As a result, the depreciation continued until the 1.2777 intermediary level.

So, in the current context, the price could be contained within a range, bounded by 1.2983 and 1.2783. As the range is preceded by a depreciation phase and as a range, usually, is a continuation pattern, it is to be expected that — sooner or later — the support will give way, targeting 1.2612.

On the other hand, if the resistance is the one that will be invalidated, then the bulls could hope for revisiting 1.3175.