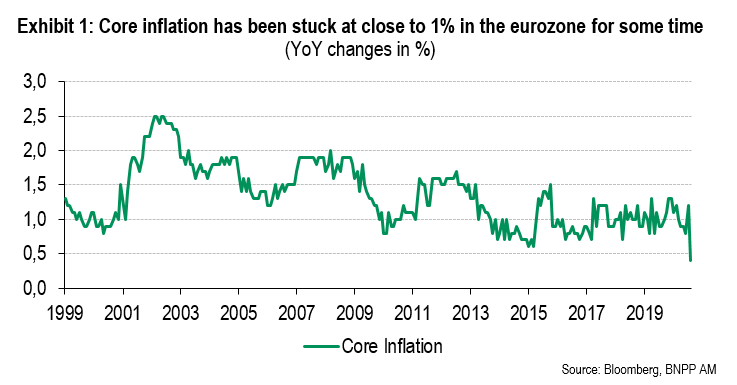 The governing council of the European Central Bank holds a scheduled policy meeting on Thursday followed by a press conference with the ECB’s president and vice-president.

We do expect the ECB to talk a good game
by signalling that the governing council
is willing to act – in particular, highlighting the attention it is paying to
key developments (inflation, the euro exchange rate) and its willingness to use
all the policy levers in the toolbox in response (while stressing that the
deposit rate is not at the lower bound).

What to look out for…

As with all policy meetings, there will be
the standard discussion of the news in the data. In this particular case, the
focus will be on the current momentum in activity and the source of the
weakness in core inflation. Discussion of the following issues could feature in
the press conference.

What to do about the
euro?

Most central bankers do not like talking in
public about the currency. However, central bankers do not have the luxury of
ignoring it. A significant appreciation of the nominal effective exchange rate
– of the kind that has occurred in the eurozone in recent months – will have
implications for the macroeconomic outlook, depressing activity and prices. The
question is how to respond.

The fact of the matter is that exchange
rate appreciation will likely lead to weaker import prices. Indeed, that
disinflationary impulse should be captured in the latest set of ECB staff
projections and could easily undo all the positive impact from whatever
assumptions the ECB staff make about the positive impact of the Next
Generation EU (NGEU) package (on the utilisation of loans and on the use of
grants).

With inflation already far too low, it is
difficult to be sanguine about any further source of disinflation.

The natural tool to respond to an appreciation of the euro is thought to be a cut in the deposit rate (currently at minus 0.50%), on the premise that currencies are more sensitive to differentials in short-term interest rates.

The problem here is that the deposit rate
may already be close to the lower bound, or a
related concept called the reversal rate – the point at which cuts in the
policy rate become counterproductive and contractionary via the banking
channel.

It also has to be borne in mind that the
reversal rate (and hence the lower bound) rises over time – that is, negative
rates become more painful for banks as time passes unless mitigating measures
such as tiering are taken.

Should the
ECB cut the deposit rate?

Of course, even if the council has
reached this conclusion, it is unlikely that it would want to announce this
view to the market because the result would likely be a counterproductive
tightening in financial conditions as any expectations of further cuts were
removed from pricing.

The ECB has also developed a couple of
mitigants to cushion the blow of negative rates on the banking sector: a two-tier
system of remunerating excess reserves and lending funds to the banks at a
rate below the deposit rate (via the TLTRO).

The ECB could certainly make more use of
these tools if it concluded that a further cut in the deposit rate was
necessary. In fact, one thing that is striking about the ECB communication on
the deposit rate is how little the executive board has said about these
mitigants and the constraints on their use. Negative rates weigh heavily, not
just on banks, but the mitigants support only banks.

Before cutting the deposit rate, we
believe that the governing council will first try to talk the euro down through
verbal intervention, highlighting in particular its willingness to cut the
deposit rate in the future.

Is
the medium-term inflation outlook too weak?

The answer here is clear: yes. The previous
set of ECB staff projections had core inflation stuck at below 1%. Of course,
core inflation has been stuck near 1% for a considerable time in Europe (see
Exhibit 1 below).

There is a real risk that inflation
expectations settle at this new level if they have not already done so, and
that would make the task of returning inflation to the target even harder
still. The fact that core inflation has just fallen to a record low (0.4%)
should just add an extra sense of urgency. More needs to be done, and given the
size of the medium-term inflation shortfall, a lot more.

ECB Chief Economist Philip Lane seemingly
made
the case for an aggressive policy response in his recent speech. He argued
for a two-stage plan in which the ECB would first offset the impact of the pandemic
on the inflation outlook, and second, once that had been achieved, the ECB
would set the stance of policy to “to ensure timely convergence to our
medium-term inflation aim.” These are laudable aims. Unfortunately, it would
appear that the ECB is still some distance from successfully completing stage
one. We doubt the projections published this week will alter that observation.

If the inflation forecasts remain as weak
as we expect, it follows from the Lane doctrine that the ECB should this week
announce an increase in the PEPP to make meaningful progress towards completion
of stage one. However, we do not expect such an announcement. Instead, we
expect another verbal intervention, with the council protesting that it is
monitoring the inflation outlook closely and willing to use all available
tools: PEPP and APP included.

We suspect that December is the earliest
likely date at which the council would announce another expansion of the PEPP.

Will
the ECB follow the Federal Reserve and adopt average inflation targeting?

Fed Chair Jay Powell’s speech at the
(virtual) Jackson Hole conference that unveiled a new
strategy of (flexible) average inflation targeting (AIT) inevitably put the
spotlight back on the ECB, raising questions about the ECB’s policy framework
and whether the ECB could tolerate an overshoot in inflation to compensate for
persistent undershoots.

In some sense, the answer here is easy:
the ECB strategy review is still in its early stages (it is not expected to
conclude until the second half of next year), so it would be unreasonable to
expect President Christine Lagarde to offer firm conclusions now.

She is likely to state that the governing
council is exploring all options; that AIT has some interesting features; that
the council views the current inflation target as symmetric and not a ceiling;
and she may even acknowledge that current and former members of the governing
council have expressed similar sentiments.

The ECB could conceivably follow the
Fed’s example because flexible average inflation targeting is a modest change
(improvement) on conventional inflation targeting. Admittedly, the central bank
is obliged to deliver an overshoot in a boom, but there is no commitment device
forcing the central bank to engineer overshoots on a significant scale or
according to a specific timetable. In its weakest form, AIT sounds more like an
aspiration than a commitment. The governing council could probably sign up to
such an aspiration.

In contrast, it seems harder to imagine
the ECB adopting a price level path target because that involves a commitment
device: a constant (and increasing) quantitative reminder of the central bank’s
failure to deliver overshoots.

There is a real risk that the ECB has
exhausted the ammunition that it is comfortable deploying and therefore lacks
the means to achieve an inflation overshoot.

The success or failure of AIT in the eurozone
would therefore depend on the stance of fiscal policy – much as it does in the
US (except that the ECB faces an even more formidable challenge in delivering
overshoots). The ECB’s governing council might well be nervous about adopting a
new more ambitious target when it does not believe it can easily hit the
current one.

Any views
expressed here are those of the author as of the date of publication, are based
on available information, and are subject to change without notice. Individual
portfolio management teams may hold different views and may take different
investment decisions for different clients. This document does not constitute
investment advice.