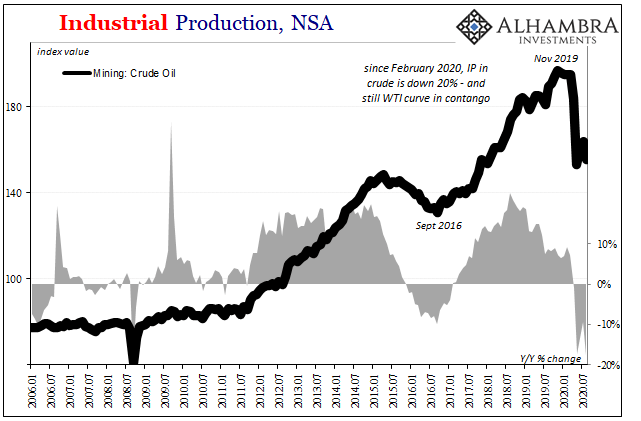 For a couple of years there, the oil patch was the heaviest contributor to the idea, at least, that the US economy had been booming. It never really boomed, of course, but on the industrial side investment and production throughout offshore and shale really were boosted and all predicated on the idea that Jay Powell’s (and the unemployment rates’) inflation scenario would be proven in not too much time.

Those were the days.

First oil contango-ed and then crashed during late 2018’s landmine, yet even still throughout 2019 the sector continued to contribute through elevated production.

Now with this post-GFC2 environment flipping everything around, it’s no different with crude.

Once a key addition to growth, it’s been a big problem in 2020 by continuously acting as a drag against at least the reopening rebound. According to the Federal Reserve’s latest Industrial Production estimates for August 2020, oil production remains down about 20% from February – which “somehow” hasn’t been enough of a supply curtailment to rebalance the marketplace and shove the WTI curve back into backwardation where it belongs.

Continued contango isn’t consistent with a robust rebound, reopening or not. That curve shape instead persistently encourages even more physical crude storage which, after such amazing supply cuts, is an unambiguous indictment of the demand side.

Our economic problems this far into 2020 are not crude oil alone, however, as that interpretation of demand indicates. Even where just Industrial Production is concerned, the lagging rather than accelerating rebound is what’s noteworthy – just as the same is in China.

While that had already been the case with July’s IP figures, these new August updates only add quite a lot more to the “puzzle.” IP in all categories failed to move all that much last month, particularly manufacturing which continues to be stuck at 2011 (or 2004) levels even after four months of reopening. 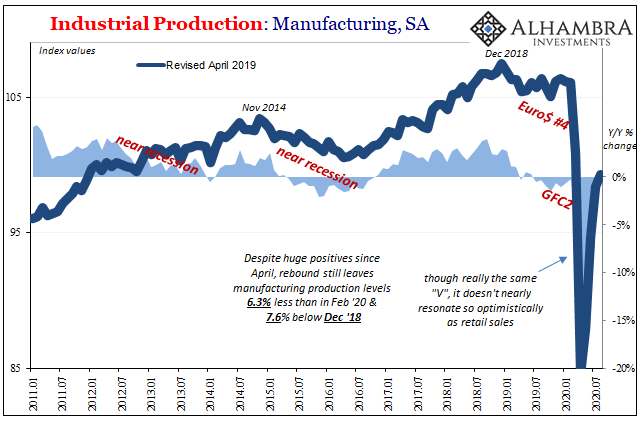 Given what we’ve observed of markets and the corroborated incidences pointing at something changing around mid-July (a slowdown), these numbers only add to the already long list of market prices and data (especially labor; jobless claims) which indicate the growing, troubling possibility of a rebound downshift having already taken place around that time.

Even in automobile production – motor vehicle assemblies in IP – an August stumble has been spotted. Assemblies had gone up near a 12 million annual rate during July, only partly (very slightly) making up for the near-total shutdown earlier in the year, before decelerating back closer to 11 million last month. 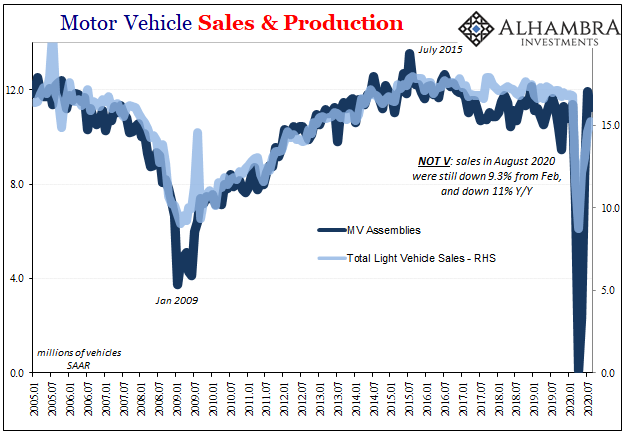 Given the size of that hole, we have to ask why automakers aren’t running full tilt, firing up maximum overtime, adding new workers on all three production shifts to make up for the huge amount of lost production during the shutdown. The sluggish rebound in auto sales (still down almost 10% from February, on a unit basis) is a pretty big clue; consumers, apparently, aren’t in any rush, either, to make up for purchases that couldn’t have happened during March and April.

The subsequent purchase lethargy, though, indicates the growing risks of what may have started out as postponed auto buys turning into outright canceled plans (maybe people want to still buy like they had thought, but no longer can). The latter would certainly give automakers reason to be cautious, if not pause, restarted production.

On the whole, from oil to autos, there’s a lot which is all-too-consistent with China’s reported figures also for August. Where’s the rebound? I don’t mean positive numbers, there was always going to be plenty of those, I mean actual, unambiguous robustness. Instead, jobless claims. 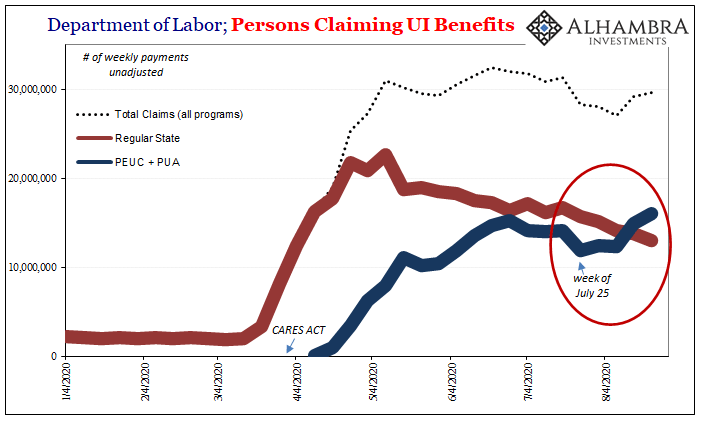 The continued absence of it is what really stands out, as are the growing questions about post-July. The implications, especially since then and what may have been a material downshift from an already too-slow pace, would be a growing risk of the “V” falling well short – meaning the increasing possibility that it couldn’t have really been a “V” in the first place.

That was always a serious possibility; reopening and the rush to make up for lost activity providing some momentum, positive numbers to get people thinking “V”…but then what once that initial bounce back becomes exhausted?