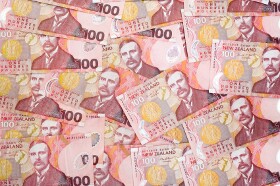 The New Zealand dollar dropped today, falling against some of its rivals, like the US dollar, for the third consecutive day. The currency declined following the monetary policy announcement from the nation’s central bank. The Reserve Bank of New Zealand confirmed that it continues to prepare additional measures to stimulate the New Zealand economy.

The RBNZ left its monetary policy unchanged, with the key interest rate staying at 0.25% and the Large Scale Asset Purchase at NZ$100 billion. Such a decision was widely expected by market participants. The central bank was pessimistic on the economy, arguing that it will require an additional stimulus to recover after the COVID-19 pandemic:

In line with the weak underlying international and domestic economic conditions, the Committee expects a rise in unemployment and an increase in firm closures, as resource reallocation continues. Members agreed that monetary policy will need to provide significant economic support for a long time to come to meet the inflation and employment remit, and promote financial stability. They also agreed they are prepared to provide additional stimulus.

The statement elaborated on the measures the bank is preparing:

The plans for additional stimulus were also known to markets, and some analysts had predicted that the New Zealand dollar may rise despite the outlook for more monetary easing. And indeed, the kiwi jumped immediately after the RBNZ made its policy announcement. Yet the rally was extremely short-lived, and the currency has retreated almost immediately, starting to move to the downside. As of now, it trades below the opening level against all of its most-traded rivals.