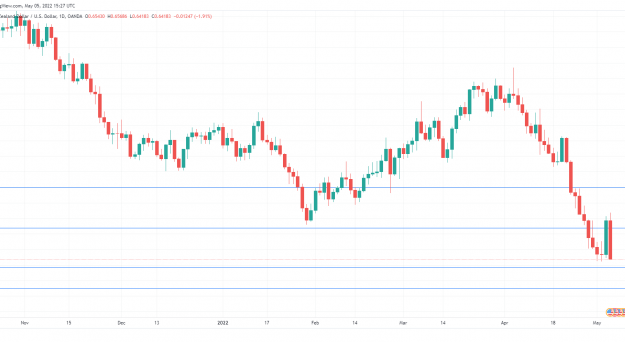 The New Zealand dollar has reversed directions on Thursday and is sharply lower. In the North American session, NZD/USD is trading at 0.6418, down a massive 1.90% on the day.

US dollar rebounds after FOMC

The New Zealand dollar is showing plenty of volatility. NZD/USD surged 1.76% on Wednesday but has coughed up all of those gains today. The US dollar lost a step after the FOMC meeting, even though the Fed hiked rates by 0.50%, which was the largest rate increase in 20 years.

The Fed continues to show a hawkish stance. The rate-hike cycle will remain aggressive, with Fed Chair Powell signalling at yesterday’s meeting that the Fed will deliver further 0.50% hikes at the June and July meetings. Yet the markets chose to focus on Powell’s statement that a 0.75% hike was not being “actively considered”. Although Powell didn’t rule out such a move, the markets were nonetheless elated, sending equities up and the US dollar broadly lower. It didn’t take long for the US dollar to recover, particularly against the New Zealand and Australian dollars.

Perhaps as significant as the Fed’s rate hike was its announcement to implement quantitative tightening, after years of quantitative easing as part of its accommodative policy. Starting in June, the Fed will sell USD 45 billion/mth in assets, which will climb to USD 95 billion/mth in September. The Fed is betting that it can curb inflation through rate hikes and a balance sheet reduction, while ensuring a soft landing for the economy and avoiding a recession.

The New Zealand labour market remains robust, as confirmed by the Q1 employment report. The unemployment rate remained at a record low of 3.2%, matching expectations. Significantly, wage growth, which climbed to 3.1% YoY, its highest level since 2008. The surge in wage growth is sure to raise pressure on the central bank to deliver another 0.50% rate hike at the May 25th meeting, which would bring the Official Cash Rate to 2.0%.