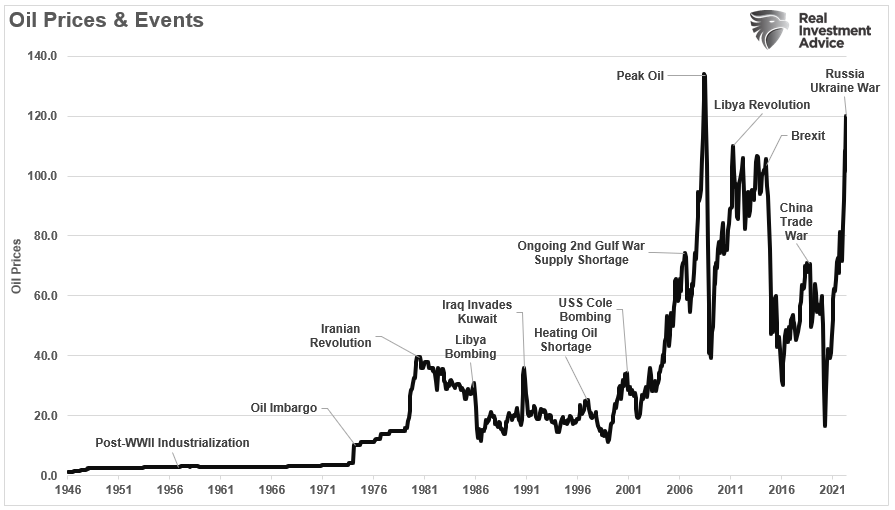 An oil price and energy stock price reversion may be starting. The reason is that oil price reversions are the inevitable outcome of economic recessions. Of course, such is due to the previous price spikes that create demand destruction in the economy.

The chart shows the price of oil since 1946.

Higher oil prices benefit oil companies by making the extraction process more profitable. However, there is also a negative impact on the economy.

“High oil prices add to the costs of doing business which pass, ultimately, on to customers and businesses. Whether it is higher cab fares, more expensive airline tickets, the cost of apples shipped from California, or new furniture shipped from China, high oil prices can result in higher prices for seemingly unrelated products and services.” – Investopedia

Of course, consumers who fill up their gas tanks each week immediately notice high oil prices. While core inflation reports strip out food and energy, those items drive short-term consumption patterns. Given that consumption comprises roughly 70% of the GDP calculation, the impact of higher oil prices is almost immediate.

As shown below, spikes in oil prices have a high correlation with economic recessions, financial events, and oil price reversions.

The Link To Oil

Oil prices are crucial to the overall economic equation. As prices increases, it translates into higher inflationary costs to consumers. Unsurprisingly, there is a high correlation between the rise and fall of energy prices and the consumer price index.

Oil prices impact virtually every aspect of our lives, from our food to the products and services we buy. Therefore, the demand side of the equation is a tell-tale sign of economic strength or weakness. As shown, oil prices track our combined rates, inflation, and GDP index.

Given that the oil industry is very manufacturing and production intensive, rising oil prices increase manufacturing, CapEx, and economic growth. It also works in reverse.

“It should not be surprising that sharp spikes in oil prices have been coincident with downturns in economic activity, a drop in inflation, and a subsequent decline in interest rates.“

The most recent surge in oil prices resulted from the massive flood of fiscal policy and a supply shortage. During the last few years, an aggressive political and Wall Street “green energy” campaign restricted drilling and refinery permitting. Those policies reduced capital formation for drilling projects and removed oil exploration incentives.

While the pandemic-driven shutdown of the economy created a supply shortage, the flood of liquidity inevitably created a demand surge. That “pull-forward” of consumption led to surging inflationary pressures and rising oil prices. We show the high correlation between oil prices and breakeven inflation rates.

The short version is that oil prices reflect supply and demand. With liquidity reversing, economic demand is weakening as the cost of living outpaces real wages. As shown, the correlation between oil spikes and declines in economic growth (3-year average growth rate) should not be surprising.

Warning Signs Of The Next Oil Price Reversion

While many analysts are talking about $200/bbl oil, it is just as possible that oil prices could fall to $60. After all, it wasn’t so long ago that oil prices went negative for a short period.

With the U.S. economy on the verge of a recession, the risk of a deflationary backdrop is rising.

Furthermore, retail sales are also showing problems with consumption. Retail sales get measured in “dollars” rather than “volume.” So, the most recent decline in retail sales was a drop in volume purchased as prices rose.

While the recent rally in energy stocks has been quite strong, the Fed is about to aggressively tighten monetary policy with the sole goal of combating inflation. In other words, to bring down inflation, they will slow economic growth, which reduces demand for commodity-based products.

Unfortunately, if history repeats, it won’t be just oil prices and energy stocks that get brought down in the process.