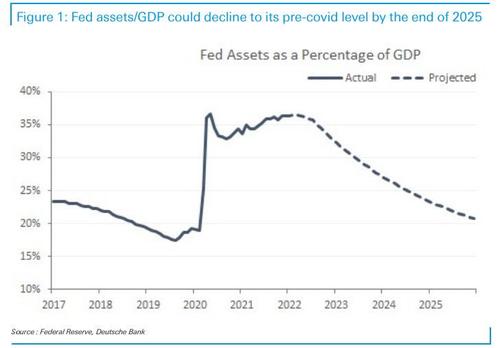 Wall Street has officially jumped the shark: with the economy set to slow this year – even as supply-driven inflation refuses to relent – consensus now expects 3-4 rate hikes this year (with Jamie Dimon predicting as many as “6 or 7”) – some are going so far as to predict how much shrinkage the Fed’s balance sheet will see in the coming years once it begins any time between March and June.

Enter Deutsche Bank, which forecasts that once QT begins, the Fed’s balance sheet will shrink from $9 trillion currently to $6 trillion.

As DB’s Jim Reid notes overnight, citing the bank’s economist Matt Luzzetti and rate strategist Steven Zeng, project that the Fed balance sheet would peak just under $9tn after QE completes in March, before falling back to eventually approach 20% of GDP from over 35% today, and around a third smaller than this peak, at which point it will be around $6 trillion.

That, according to Kostin, is a level more consistent with the pre-covid experience and a potential target highlighted by Governor Waller. Under this projection, the balance sheet would reduce by $560bn this year and $1tn in 2023, and the balance in outer years.

As an aside, there zero chance of that happening as by then the US will be in a recession and the Fed will be scrambling to ease as even the market now expects, projecting the next rate cut will take place between 2 and 3 years from today.

There is another reason why this will never happen: the market will implode long before the $3 trillion in QT is completed.

For context, Reid notes that between October 2017 and August 2019, QT reduced the balance sheet by around $700bn from c.$4.47tn to $3.76tn, at which point banks realized they dont have nearly enough reserves and we had the infamous repo crisis which ushered in “NOT QE.”

The DB report approximates that a $650-700bn drawdown equates to around a 25bps hike so out to end 2023 they think the reduction will be equal to c.2.5 hikes.

Of course, this is all purely theoretical, and as even Reid notes, his personal view is that “the balance sheet will have to grow substantially again in the years ahead as the authorities are forced to use financial repression in order to make the growing public debt burden sustainable.” We agree with this 100%. The only question is what crisis will catalyze the next explosion of the Fed’s balance sheet.

Even so, the Fed is increasingly trapped because while it may have no choice but to pivot dovish soon, in 2018 the Fed had the luxury of a dovish pivot as inflation trended back down towards and below 2%. Or as Reid concludes, “will they have the option to be as flexible this time?”

Well, of course: all the Fed needs to do is inspire another global crash a la Lehman and reset the inflationary score. And this time a global pandemic won’t cut it.