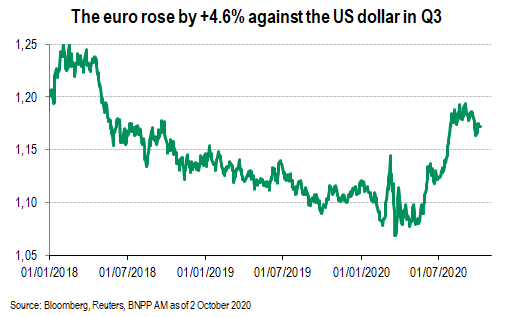 September saw
profit-taking on equities amid concerns over Covid-19 as well as economic and
political uncertainties. Global equities fell in September but didn’t panic.
Although fiscal support measures are being a bit slow to come on stream,
central banks are still firmly on the case.

Early trading in September saw heavy profit taking, the
S&P 500 index having just set a new record high when it closed on 2
September, the same day it marked a rise of nearly 11% since the start of the
year. Labouring under substantial profit taking and certain technicalities, US
tech stocks were particularly hard hit, with the Nasdaq composite index
correcting by 10% between 2 and 8 September. These swings brought with them a
rise in implied volatility: The VIX index, calculated on S&P 500 options,
rose in a few days from 22 to 34, its highest since the end of June.

However, there was only limited contagion to other major
stock markets and other risky assets and the ‘risk off’ phase failed to really
take hold. Firstly, volatility eased and eurozone indices held up well for most
of the month; in Tokyo, the stock market even ended slightly higher. Secondly,
US equities rose at the end of the period, driven in particular by hopes of an
agreement in Congress on new fiscal measures.

Over the month, global equities fell by 3.4% (MSCI AC
World index in US dollar terms). Coming after five consecutive monthly gains,
the drop reflected concerns about the resurgence of the Covid-19 outbreak. The
rise in the number of cases of contamination and hospitalisation led many
countries to beef up social distancing measures to varying degrees: A
re-imposed lockdown in Israel, local lockdowns in Spain, restrictions on public
gatherings and shorter bar and restaurant opening hours in France, the UK and
Germany in particular.

The threat of a second wave and responses like these
reminded investors of the reality of the uncertainties hanging over the global
economy – something they had chosen to ignore during the summer. Disappointing
activity indicators, particularly in the eurozone, fuelled investor concerns by
highlighting signs that the recovery was running out of steam after the
mechanical (and rapid) catch-up since May.

Against this backdrop, the renewed commitments from the
major central banks to maintain their highly accommodative monetary policies
for a very long time, or even to take additional measures if needed, failed to
fully reassure equity investors.

In Asia, the economic data of recent weeks has been quite
encouraging. Activity is returning to pre-pandemic levels in many sectors of
the Chinese economy and the pick-up in demand on Asian exporters is favourable.
Moreover, the epidemic appears to be under better control than in major Western
countries and other emerging markets. Emerging Asia’s better resilience helped
the MSCI Emerging Markets Index (-1.8% in US dollar terms) outperform developed
markets.

US equities underperformed other major markets in
September. The S&P 500 Index lost 3.9% and the Nasdaq composite, 5.2%. This
month’s decline, however, leaves the Nasdaq up by 24.5% year-to-date (+4.1% for
the S&P 500). European stock markets also ended down: -2.4% for the EURO
STOXX 50, which has fallen by 14.7% so far in 2020, penalised in particular by
the difficulties of financial stocks. In Tokyo, the Topix index ended the month
slightly up (+0.5%), supported by the Bank of Japan’s purchases and by the
recovery in demand in Asia. The government’s change of leadership, which was
quick and smooth, was seen as ensuring continuity in economic policy. At the
global level, cyclical sectors, including some subsectors of technology,
outperformed the rest of the market. Energy and banks posted the biggest
monthly declines.

The European central bank
and the rise of the euro

The EUR/USD exchange rate, having peeped above 1.20 on 1 September, first stabilised at around 1.18 before heading towards 1.16. While market participants had envisaged that the ECB’s comments would put an end to the rapid appreciation of the euro that had been going on since late May, when the exchange rate was below 1.10, market moves in September were a result of concerns over eurozone growth and the decline in equities that led investors favouring the dollar. The EUR/USD exchange rate finished the month at 1.1743, down by 1.7% compared to the end of August. Even so, the euro appreciated in the third quarter.

Graph shows changes
in the EUR/USD exchange rate from January 2018 to September 2020.

Following the European Central Bank’s (ECB) monetary policy
meeting on 10 September, there were no changes in key rates, asset purchase
programmes or forward guidance. While this was largely expected, observers were
disappointed on several points, and were left with the impression that the
ECB’s stance was a little less dovish than expected.

This feeling was compounded by various rumours that some
members would have liked the upward revision of the GDP forecast to have been
better highlighted. An 8% drop in eurozone GDP is now expected for 2020, while
the figures published by the ECB in June showed a drop of 8.7%. This was mainly
due to a somewhat smaller decline in Q2.

The ECB’s reaction to the euro’s climb seemed low key. As
is customary, the ECB has talked about the effects on inflation of a strong
currency. However, its statements have remained rather muted and seem to show
that the Governing Council is not too concerned about the euro hovering at
around USD 1.18. Yet only the day after the meeting, several comments on this
topic suggested dissensions among council members.

Against this background, expectations remain high for the
announcement in December of a further increase in the asset purchase envelopes,
or a reallocation between programmes – and this despite some comments giving
the contrary impression that the envelope of the PEPP (Pandemic emergency
purchase programme) may not be fully used.

The investor optimism
that had prevailed in July and August weakened in September. The difficulties
encountered at the beginning of the month by US tech stocks spread to other
risk assets, although without markets reaching for the panic button.

As signs of a second wave of the Covid-19 pandemic mount,
investors seem to have suddenly become aware of the fragility of the global
economy. After the slump in activity in the spring and the rapid rebound from
May onwards, momentum has recently seemed to be running out of steam.

In addition, as the US election approaches and Brexit
negotiations enter the final straight, the political factor will come more to
the fore in the coming weeks.

And among these health, economic and political
uncertainties, there are likely to be delays in the adoption of new fiscal
support measures in the US and Europe. Equity movements could be erratic in the
short term even if a still rather cautious investor positioning is likely to
limit the downside.

In the medium term, proactive economic policies should
ensure a favourable economic and financial environment. The message from
central banks is clear: The monetary policies put in place will allow long-term
rates to remain very low for a very long time. Such an environment is
supportive for equities and risk assets generally. In addition, advances in
medical research should become more tangible over the coming months and help
boost economic agents’ confidence, which remains crucial for a sustainable recovery
that can spread across all sectors.

Beyond possible short-term headwinds, we remain cautiously
optimistic and, depending on the signals sent by our proprietary market
“temperature” indicators, we may consider bearish moves as opportunities to
strengthen our equity position.