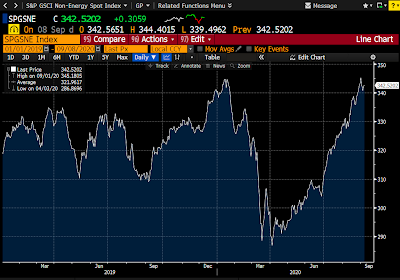 In my last post, August 30th, I noted signs of a possible stall in the economy (TSA throughput, very low real yields, high levels of uncertainty). Since then there are a number of indicators which show continued improvement and even some surprising strength.
Chart #1
Chart #1 shows an index of the prices of non-energy commodities. Prices have now rebounded to where they were prior to the onset of the Covid Crisis, and that is a strong indicator that the global economy is rebounding. To be sure, soaring prices could also be due to the inflationary impulse of monetary policy, as I also noted in my last post: by promising to keep rates at extremely low levels, the Fed is actively encouraging people to spend the money they have stockpiled, and in addition to borrow more. “Borrow and Buy” is the new Fed mantra, in my view, though you won’t hear it from many other sources—most people are worried that the Fed is pushing on a string and deflation hangs over our heads like a dark cloud. Curiously, those same people are probably arguing that the Fed is just inflating asset bubbles which will sooner or later pop.
Chart #2 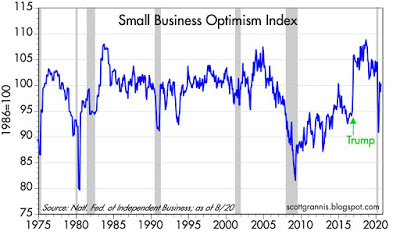 Small businesses were crushed by the lockdowns, and sentiment was in the dumps not too long ago. But as Chart #2 shows, small business optimism has rebounded strongly, and is now higher than it was at any time during the slow-growth Obama years. However, optimism is still substantially lower than it was two years ago. 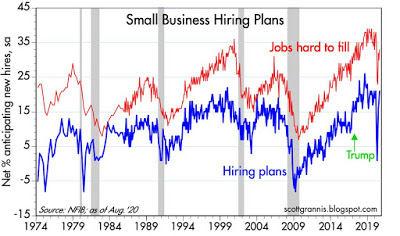 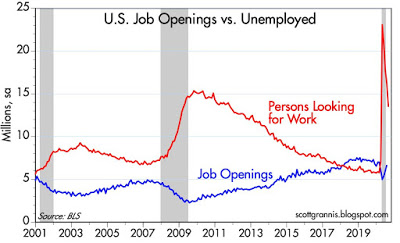 Chart #3 adds some meat to the small business story. Here we see that hiring plans recently have soared to relatively high levels (blue line). Despite the small army of the unemployed looking for work (~13 million, as Chart #4 shows), businesses continue to report difficulties in filling positions with qualified workers (red line, Chart #3). There is a lot of activity going on behind the scenes—and the LA freeways are getting more congested. 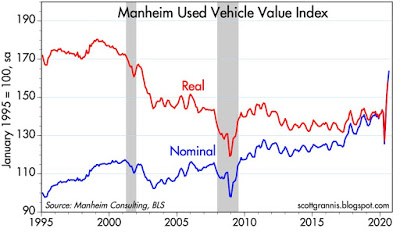 Chart #5 shows a very surprising surge in the prices of used autos in the past 3 months. Used car prices are now 16% higher than they were a year ago! Some lucky people must have found themselves with extra money, while others are finding cheap borrowing rates (borrow and buy!). Everyone is eager to get back out on the road again. You can also find hints of inflation in this chart. After almost two decades of declining inflation-adjusted prices (red line), prices are now exploding to the upside no matter how you look at it. We’re haven’t seen anything like this since the inflationary 1970s. 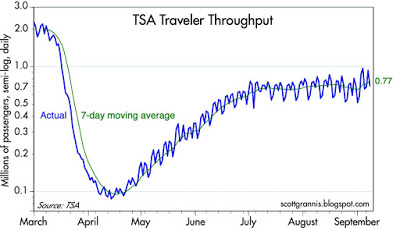 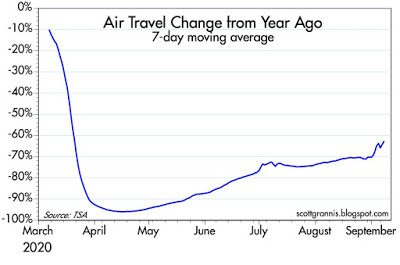 Chart #6 shows that the late summer doldrums in air travel are now giving way to what looks like a renewed surge in air travel. The blue line represents actual daily passengers going through TSA security lines, while the green line is simply the 7-day moving average, which is important to follow because there are very definite intra-weekly patterns in this data. What you don’t see in this chart is that August is typically a slow month for air travel. Last year, TSA throughput in the month of August actually declined by 15%. So the fact that TSA throughput held steady in August this year means it was unusually strong. That fact shows up better in Chart #7, which shows how the the 7-day moving average this year stacks up relative to the same period last year. Here we see that air travel was picking up relative to 2019 throughout the month of August, and over Labor Day it really picked up. I’ve heard from not a few friends that they are feeling better about flying these days. Air travel today is still only 37% of last year’s levels, but that is up significantly from what it was just a few months ago.
Chart #8 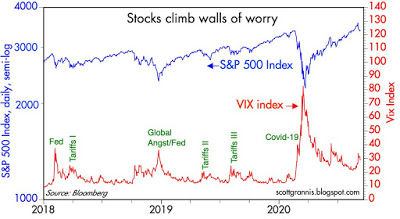 Finally, Chart #8 is an update to what is now a perennial favorite of mine. Here the latest stock market drop looks a lot like all the others in recent years, in the sense that all the important declines in equity prices have been strongly correlated with a surge in the fear index (Vix). Fear is still very much with us, given the still-elevated level of the Vix, and risk-aversion is still quite strong, as evidenced by the 10-yr Treasury yield, which is hugging extremely low levels (0.6 – 0.7%). These are not the symptoms of an over-extended market.

I know that a lot of people worry that stocks are in a Fed-blown bubble, but with a 1-yr forward PE ratio of 26-27, stocks today are simply discounting a sizable pickup in earnings over the next year. If the economy continues to improve as it has these past few months, that’s not unreasonable at all. Especially considering that the alternativez to stocks—notes and bonds—sport PE ratios that are an order of magnitude higher than stocks. One quick example: the 0.7% yield on Treasuries is equivalent to a PE ratio of 143.