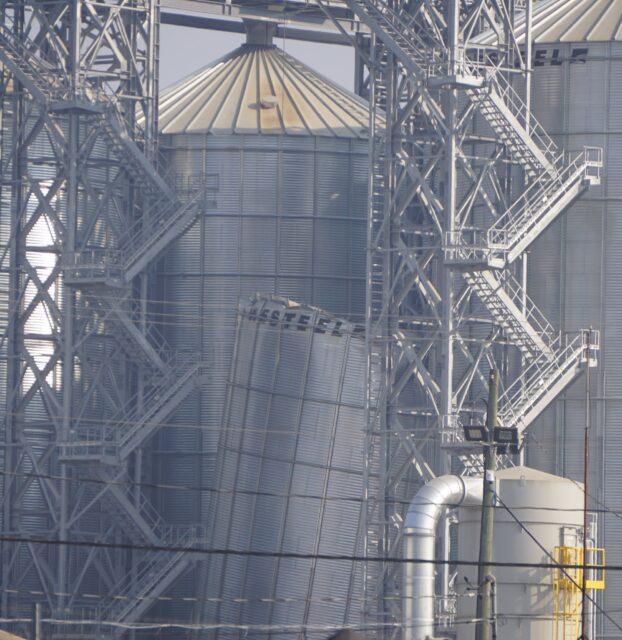 Percentages may not add to 100% due to rounding.

Portfolio is valued in CAD (CAD/USD 0.7507);
Other values derived per account statements.

I had a pretty good read and feel for the second full post-COVID quarter, up until about the middle of September, where I could tell that my read on things completely fell off the rails and as a result, I had to bunker down a little. It was symbolized by the grain (or in this case, wood pellet) failure of the following structure in North Vancouver, BC in the beginning of the month:

This tower failure was enough to wipe out 25% of Ag Growth International’s (TSX: AFN) stock price, which also solved the problem of being overly concentrated in this position (the more pleasant way of resolving this issue would have been a tax-deferred takeover, but I digress).

Before this collapsing moment, however, one of my finer points in time was executing on a negative volatility trade in the first week of September which lead to a reasonably decent gain. Also, Bombardier (TSX: BBD.B) finalized the deal terms with Alstom, which caused the front-duration unsecured debt to rise from about 80 cents to the dollar to 95 cents (do NOT eliminate this company from your watchlists!). I performed one major equity purchase in the quarter, taking a moderately-sized position on a well-known TSX 60 company that I can just forget about (over the next few years they will go higher). There were some other items that went up and down (example being Yellow’s blowout quarter) but I won’t bore you with the review.

The level of performance in the portfolio for the first three quarters has been excellent and market-beating (indeed, I have not been on a streak like this since 2016), but I think this magic is going to end for a myriad of reasons. One is that the post-COVID-19 psychology is now well anticipated by the marketplace; before it was not. I no longer have an edge on the COVID pulse, so to speak. As a result, I have been a bit more cautious and have not been as eager to re-deploy cash balances. I am happy to sit and wait again, although sitting with a 90% invested portfolio isn’t exactly playing the “bunker down” mentality. I am not particularly impressed with other “safe” options, including cryptocurrencies (Bitcoin), precious metal hedges (Gold), or land titles (whether residential or commercial or industrial). Indeed, such safety, and even safety in short-term treasury bonds (yielding next to nothing) or even cash itself, is an illusion. Let’s get something clear in today’s financial marketplace: There are no more safe options. We are all forced to take risk.

I will self-plagiarize my own writings on “An alternative way of looking at the economy” and “Canada’s Economic State” and incorporate both articles into this report by reference.

We are in the sobering up part of the COVID process, and this sobering process is going to result in a very long hangover. It isn’t going to be pretty. Part of this sobering process is going to be the conversion of the currency into a digital currency system. The primary argument against such a system is the fact that you can track and retrospectively apply taxes against any economic exchange, but in reality the implementation of the digital currency is for the sole reason that it will be much easier to implement negative interest rates.

To economically model this with a broad brush, just imagine there is a fixed pool of output, and currency reflects the way of quantifying the control of the fixed pool (money or currency is the instrument of convincing others to give you a good or service). As governments are blowing higher and higher deficits, this has the effect of making it more expensive for the public to control this output and it will also result in suppression of return on capital, hence the real economy is going to grind down.

Eventually something will give – there is a political boundary for the economic actions that are going to be taken. Predicting the outcome of this is very difficult, and you see this manifesting itself with the inflation vs. deflation debate. Smart economists like Lacy Hunt are worth paying attention to, and he also outlines the trigger point where you go from a probable deflationary scenario to inflationary (when central banks are empowered to directly pay the bills of the government). So even though the pool of monetary stock is getting larger, if most of it isn’t being circulated through the economy (it essentially gets dumped into a black hole in the form of quantitative easing, never to be seen again), in essence you have a lower proportion of economic activity with the remaining currency. Less money chasing a fixed pool of goods and services is the definition of deflation.

We are facing some very complex questions of how we facilitate our economic transactions, and COVID-19 (or more precisely, the reaction to COVID-19) has accelerated the day of reckoning when we have to address these questions. How it will shake out is another question, and this dramatically increases the uncertainty. This will not bode well for equities that trade purely on speculative appeal, which seems to constitute most of the market capitalization at present.

Indeed, the only currency that appears to have obvious finiteness and utility is time. The service sector is very good at monetizing this (e.g. you can exchange the fruits of your efforts for an hourly wage, or outsource some activities that would take time in exchange for dollars), but the monetization of time on a macro level is measured in part by both interest rates and implied volatilities that trade on option markets.

This is one of the strangest elections I can remember, but it is because the variables leading into the election are unprecedented. The COVID-19 diagnosis of President Trump is another scene in what has been a thoroughly fascinating reality television show that started in 2015. While I try to avoid politics on this website, I will offer a prediction closer to the date of the election. Unfortunately, unlike 2016 where I was pretty sure of the result, even this election eludes my radar. One thing, however, that makes this election different is that I deeply suspect the reliability of public polling is even worse than it traditionally has been.

I will remind readers of this website that on October 7, 2016, the Acccess Hollywood tapes of President Trump saying politically incorrect comments about female relations were revealed. After this moment, Trump traded at around 8:1 odds against winning the presidency and we all know what happened.

Right this second, Pinnacle Sports has Trump at +153 and Biden at -180, which very roughly puts Biden at a 2/3rds chance and Trump at 1/3rds. While both sides during the first presidential debate did not do themselves many favours, Biden did win simply by not mentally degenerating on stage.

The provincial NDP ruthlessly called a snap election, and this will work to their advantage. The provincial Green party was one week fresh from electing a new leader. The BC Liberals (positioned loosely on the centre to centre-right) are being lead by a less charismatic equivalent of Michael Ignatieff and are not gaining any traction whatsoever with the electorate. The BC NDP will receive about 60-65 of the 87 seats in the province for a comfortable majority government.

Macroeconomic rocket fuel (in the form of Federal Reserve asset purchases) has stalled somewhat. They’re probably in a “wait and see” mode, although if the market crashes, they will probably prime the asset inflation pumps again. The Bank of Canada has gotten in on the act as well. Governments have been blowing huge amounts of money on the fiscal stimulus side, but blowing out huge sums of money likely just represents a pull of demand from the future and in itself is likely not a very productive usage of capital.

Still, there is an element of TINA (There is no alternative), but this will come in the form of volatility as sentiment drifts from greed to fear to greed, coupled with the realization that the real economy is still in the doldrums.

Q4 is likely to be negative for the broad indicies and most likely my portfolio. I’m not sure to what magnitude. I’m waiting and seeing until my crystal ball clears up.

Performance and TSX Composite is measured in CAD$; S&P 500 is measured in US$. Total returns indices are with dividends reinvested at time of receipt.