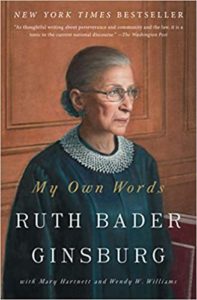 There have already been an extraordinary number of remembrances, celebrations, and criticisms written of Ruth Bader Ginsburg’s life and work in the days since her passing. I’m grateful for her contributions to advancing gender equality in law, but I have no assessment of her overall judicial legacy to add to the outpouring. Instead, I’ll offer just a few thoughts about her success and why it means so much to so many people.

One question that fascinates me when I think about RBG is: what made her decide she could do it? When RBG started law school in 1956, women accounted for less than 3% of the legal profession (preface; this and all other page numbers refer to Ginsburg’s collection of writings, My Own Words). Further, she was a mother. At the time, being a woman in a demanding profession was unlikely enough, but being a mother and a professional was truly exceptional. Until the early 1950s, the majority of local school boards and clerical firms had “marriage bar” policies in place against the hiring and retention of married women, so heading off to law school with a family in tow was truly a venture into uncharted waters. This is around the same time when Elinor Ostrom—future Nobel Prize winner in economics—would have been splitting up with her first husband because he saw graduate coursework as incompatible with their life together (Tarko, p. 4).

Ginsburg credits her mother and her undergraduate teachers with enabling her “to take part in the effort to free our daughters and sons to achieve whatever their talents equipped them to accomplish, with no artificial barriers blocking their way” (preface). She credits her mother with encouraging her to be a lady, meaning, to always be civil; to be independent; and to love libraries and books. Ginsburg mentions the ambitious, literary “Jo” from Louisa May Alcott’s Little Women as a favorite find from those early days in the library (p. 4). I suspect if you took a poll of women in academics today, you’d find an awful lot of “Jo”s.

She also credits two of her undergraduate professors, novelist Vladimir Nabokov, and constitutional scholar Robert Cushman, with teaching her the value of choosing words carefully and taking a principled stance (p. 20-1).The latter was deeply concerned about the impact McCarthyism was having on civil liberties. RBG’s engagement with this cause was her first experience with the idea of the lawyer as a defender of constitutional rights, an influence which would carry through into her work with the ACLU’s Women’s Rights Project. The first brief RBG filed with the U.S. Supreme Court as a lawyer was in the 1971 case of Reed v. Reed, in which a mother had sued to be able to administer the estate of her deceased son. Idaho law had given explicit preference to the father since he was male, but the Supreme Court decided in favor of RBG’s argument that the Fourteenth Amendment did protect against gender discrimination in law (p. 115). 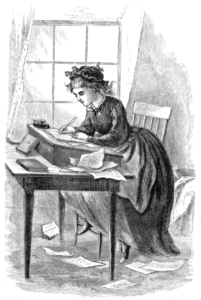 RBG saw this work to advance equality as the “constitutional legacy” of our founding ideals: “The founding fathers rebelled against the patriarchal power of kings and the idea that political authority may legitimately rest on birth status. Their culture held them back from fully perceiving or acting upon ideals of human equality and dignity” (p. 231). Those interested in comparative economic systems may be interested to find Don Lavoie expressing a similar sentiment in his conclusion to National Economic Planning: What is Left?, in which he argues that it was the incompleteness of the founding father’s vision of a non-hierarchical liberal democracy that blinded them to the harm that slavery, inequality in rights, protectionism, and monopoly privileges would wind up causing to their government and their principles.

Metaphors like “breaking a glass ceiling” don’t really fit lives like RBGs. They suggest that there was an obvious way up and out, and it was only a matter of time before someone broke through. RBG herself used the term “waypaver” when talking about the women who had broken down earlier legal and professional barriers. It doesn’t roll off the tongue as smoothly as other descriptors, but it fits reality well. History didn’t have to move the direction that it did. Waypavers are willing to be first in line to take chances that others around them are either not willing or not able to. In so doing, they forever alter the expectations of those who come after them. By deciding the path of professional constitutional law was possible for her, Ginsburg made it easier for others to decide they were capable as well.

RBG was well aware of those who paved the way for her as well. For instance, she spoke on multiple occasions about Belva Lockwood, the first woman to gain admission to the U.S Supreme Court Bar, and the many obstacles she had overcome. Lockwood’s 1869 application to study law was rejected because she “would…distract the attention of the young men,” and then her degree was denied even after she successfully completed all coursework because it would “lessen the value of the men’s diplomas” (p. 66). Lockwood would go on to be the first woman to argue in front of the U.S. Supreme Court and the first woman to run for President. Without Lockwood, would RBG have been able to be RBG? Without RBG, what future leaps would not be taken?

Overall, RBG’s life and success are a testament to the power of encouragement. The experiences and lessons we receive directly from parents and teachers matter, as do the lessons from history about those who paved the way before us. Waypavers like RBG feed that inkling of doubt: maybe what we thought was impossible is in fact possible.

Jayme Lemke is a Senior Research Fellow and Associate Director of Academic and Student Programs at the Mercatus Center at George Mason University and a Senior Fellow in the F.A. Hayek Program for Advanced Study in Philosophy, Politics, and Economics.

As an Amazon Associate, Econlib earns from qualifying purchases.