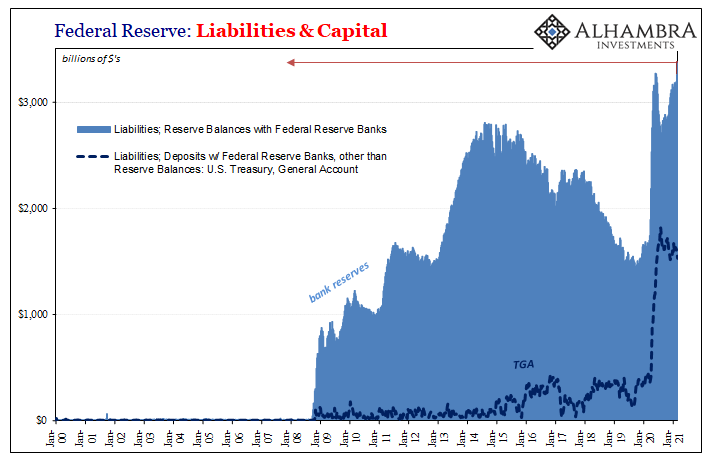 According to the Federal Reserve’s latest balance sheet update (to last Wednesday, Feb 24), its remainder balance of bank reserves declined a touch from the week before. That week, Feb 17, had seen aggregate reserves rise to a record high of $3.38 trillion. These reserves are utterly abundant, no arguing that, but what does this mean?

The other part of this overflowing policy plenty is, or will be, related to the Treasury General Account (TGA). So far, not much has come out of it even though Treasury Secretary Janet Yellen has said hundreds of billions will have to over the coming months. Up to last Wednesday, only about $139 billion has since the middle of January, with $103 billion of that taken out during the month of February alone.

Even so, the TGA balance had been lower before, not long ago back at the end of November. 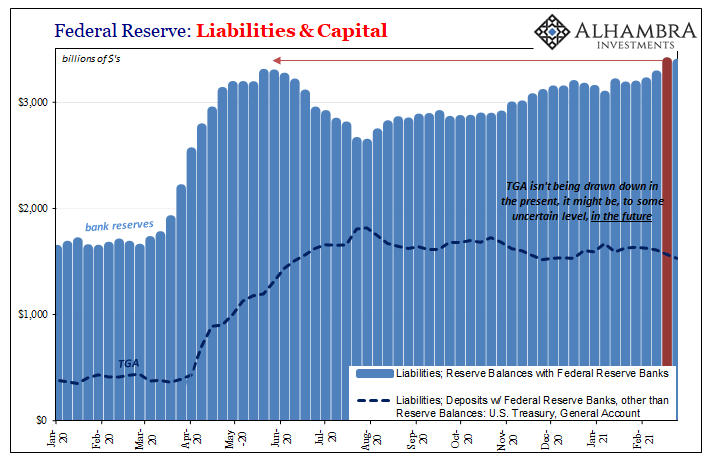 But if QE is “money printing” and the drain in the TGA is putting back some (or a lot) of what’s already been printed, why so many contrary indications especially dating back to the early part of January?

For one thing – Tbills. More impressive that its decline, in the wrong kind of way, in short-term bill equivalents it’s been the outer tenors like the 12-month bill that have really stood out. That one was up around 15 bps in early October and had been 14 bps as late as November 3.

From January 13 forward, though, from 12 bps dropping to as low as 6 bps; six. While down there, it had been one and sometimes two bps underneath effective federal funds (EFF). A one-year bill returning less than overnight fed funds. That can’t be “too many” reserves, other wise EFF would be leading the charge downward toward the RRP at zero. 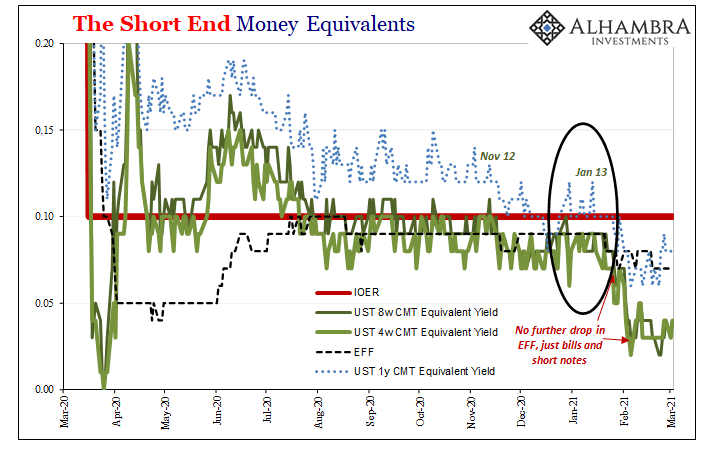 That’s not all. Earlier we took note of a pretty big one – CNY. You don’t really have to imagine much where the yuan is concerned, the change in direction was quite explicit and explicitly dates back also to early January.

Not merely CNY, though, a whole rash or range of currencies have put in the same pattern; from mild or modest reflationary rebounds to what right now has been the lengthiest (not highest) dollar “bid” (read: proxy for tightness) since last April. 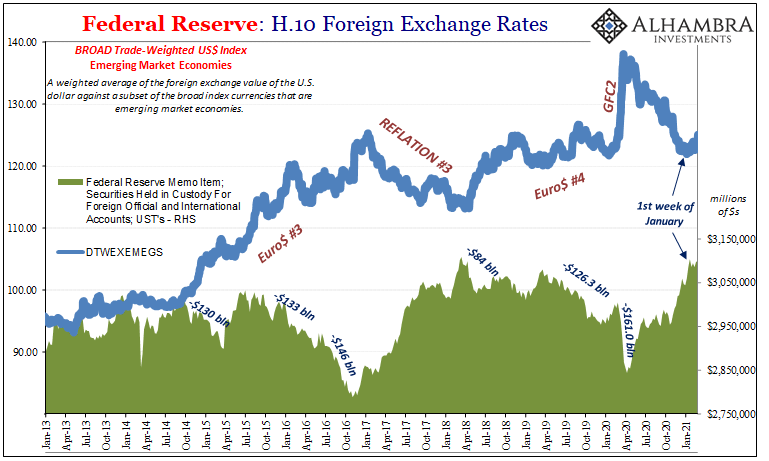 We even find a shift in the Fed’s courtesy holding of UST’s on account for foreign institutions (including overseas central banks). This latter has held to a very clear correlation with the dollar’s exchange value, as you’d expect given the substance of what’s in these courtesy accounts: Treasuries have tended to disappear from Fed custody out of these foreign hands and into the shadows of rising (like the dollar) eurodollar tension as the dollar goes up.

So, on the one hand “abundant reserves” about to become even more abundant, to the point of record flows and the presumably inflationary consequences which must follow the Fed’s money printer in overdrive.

Then again, like the other hand which keeps indicating instead effective monetary tightening, inflation expectations – going back to early January, too, of course – are longer run more like the tightening than over-abundance. 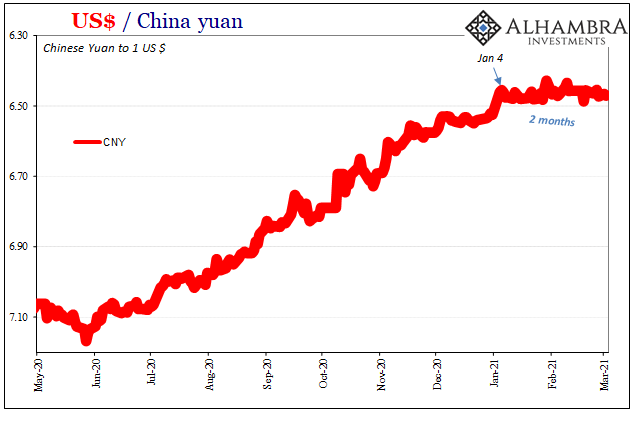 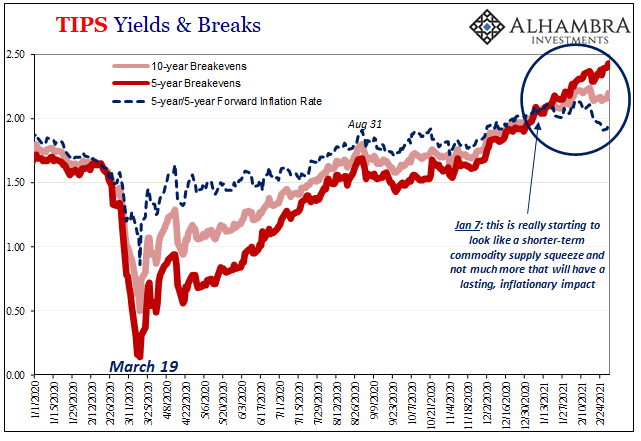 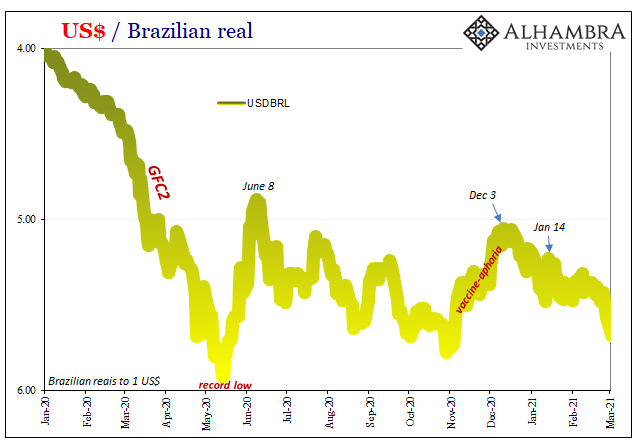 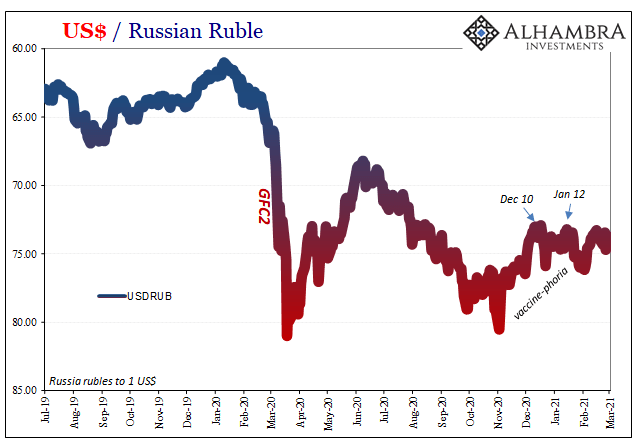 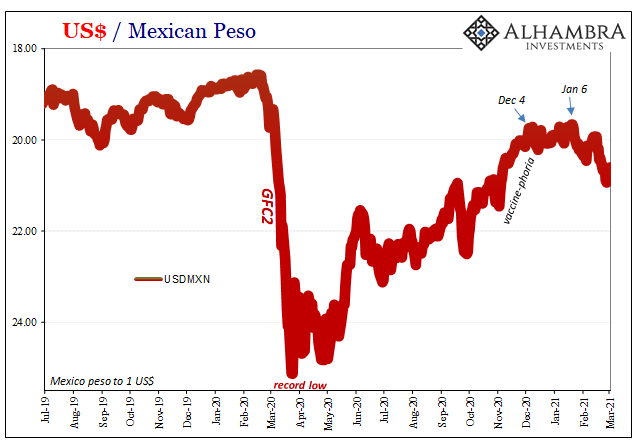