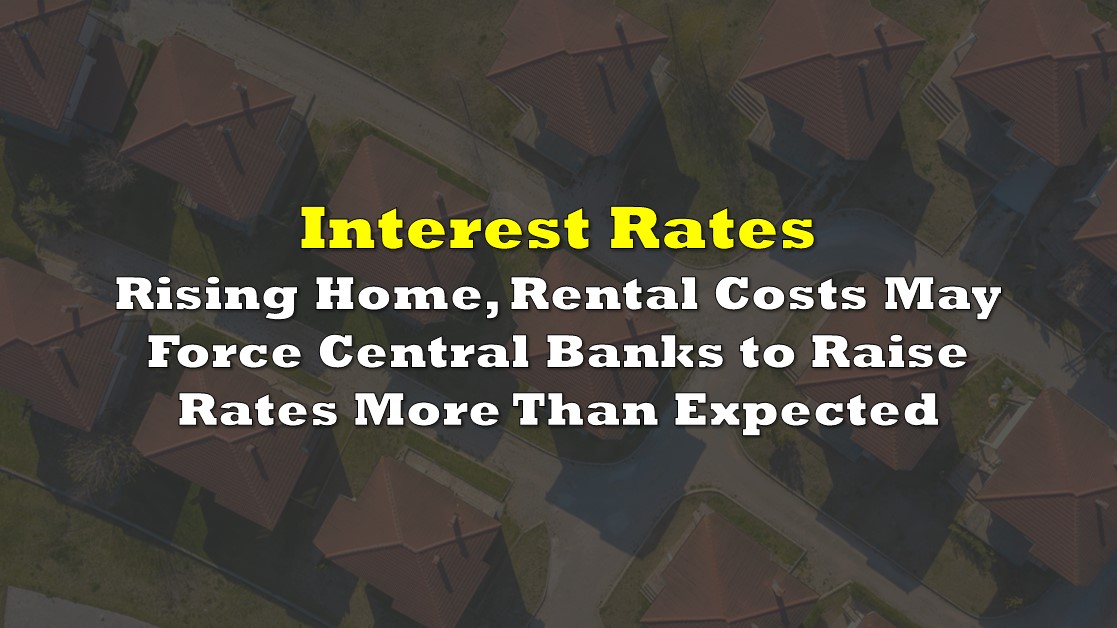 When discussing the stickiness of inflation and the need for central banks to raise interest rates to bring inflation down to more palatable levels, most market observers tend to focus on items we purchase everyday like groceries and gasoline. A more pernicious foe — and one which may force central banks to raise interest rates to much higher levels and over a longer period than expected — is the effect of soaring home prices and rental costs.

For homeowners as a group, the effect of the COVID-19 pandemic has been a significant increase in net worth due primarily to the staggering appreciation in the value of home(s). In the U.S. alone, the value of homeowners’ equity has soared US$6+ trillion in just two years to US$26 trillion, according to U.S. Federal Reserve statistics. To put that figure in perspective, the 2022 GDP for the U.S. and the world should total around US$22.8 trillion and US$95 trillion, respectively.

Anecdotal evidence of extreme rent increases across the U.S. are everywhere. A researcher at Harvard’s Joint Center for Housing Studies says “we’re seeing a 15% increase in rents across the nation.” In some markets rents are up more than 20% or 30%. Rents in Miami, Florida are reportedly around 60% higher year over year. (In the state of Florida, imposition of rent controls are illegal.)

Most analysts are quick to point out the cause of all this: Western nations failed to build sufficient housing after the financial crisis hit in 2007. The onset of the COVID-19 pandemic first caused the building of homes and apartment houses to come to a near complete halt for around six months. Then, buyers in unison decided to look for more spacious homes to take advantage of extremely low mortgage interest rates.

The inventory of homes for sale in the U.S. plummeted ~50% to historic lows of around 750,000 at year-end 2021 from early 2019 (in a country with a population of more than 330 million). At the same time, the supply chain for homebuilding (and other) commodities became extremely stressed.

Probably the most-followed inflation index in the U.S. (and the world) is the U.S. Consumer Price Index (CPI). About one-third of the CPI represents costs associated with housing. The concerning aspect of the way the “shelter index” portion of the CPI is computed is the lag between when rent increases occur and when they are reflected in the index. So, the impact of recent historic home price and rental increases have only partially been factored into the CPI. Note that the for the twelve months ended March 31, 2021, the CPI jumped 8.5%. Excluding food and energy, the increase was 6.5%.

This lag discussed above also means that when rents ever do slow down, their rapid rise to that point will continue to result in higher CPI prints — perhaps for an extended time. Indeed, economists at the Federal Reserve Bank of Dallas have commented on this calculation nuance: “Current house price growth is most strongly correlated with rent inflation 18 months later.”

The net of all this suggests that the housing-related proportion of the CPI (about one-third) will remain elevated for a long time, potentially forcing the U.S. Federal Reserve to raise short-term interest rates more significantly and over a longer period than many expect.

Information for this briefing was found via the Federal Reserve and the sources mentioned. The author has no securities or affiliations related to this organization. Not a recommendation to buy or sell. Always do additional research and consult a professional before purchasing a security. The author holds no licenses.