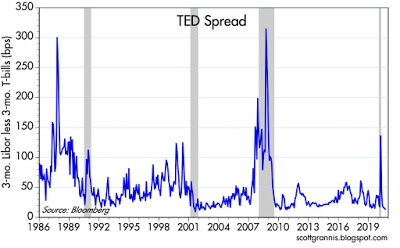 Often, prices alone cannot tell the story. Knowing a stock has gone up 10% is nice, but if that happens in the context of the broad market rising 20% then it’s not so nice. In the bond market, comparing one yield to another is essential to understanding value. Virtually every bond in the world is priced relative to Treasuries of comparable duration or maturity. The Treasury yield curve is the “backbone” of all yield curves; it sets the gold standard for yields of all maturities because Treasuries are the most liquid, risk-free securities in the world. Without the Treasury yield as a universal benchmark, the bond market would be much less efficient.
Looking at the “spread,” or difference between the yield on, say, a corporate and a Treasury bond of similar maturity is essential to understanding the value of that bond, which in turn depends on how risky the market perceives its issuer to be. The greater the spread, the riskier, and the smaller the spread, the safer. Spreads can also tell us about the health and underlying liquidity conditions of the market as a whole. And by inference, spreads can also tell us about what the outlook is for the economy, since a healthy financial market is essential to a healthy economy.
The following charts cover the spreads I consider essential to understand the economic and financial fundamentals. Fortunately, they are all telling a good story.
Chart #1
Chart #1 looks at the “TED” spread, which is the difference between the yield on 3-mo. LIBOR securities and 3-mo. T-bills. (The acronym TED comes from Treasury vs EuroDollar.) LIBOR is a standardized measure of short-term yields of dollar-denominated securities which trade overseas in what is commonly referred to as the eurodollar market. The TED spread is equivalent to the extra yield over risk-free T-bills that investors require to accept the credit risk of a major overseas bank, since it is those banks that pay LIBOR when they borrow. Long story short, the TED spread is a good proxy for how risky the global banking system is. Current spreads are about 15 bps, which is the difference between the 25 bps yield on 3-mo. LIBOR and the 10 bps yield on 3-mo. T-bills. That’s about as low as the TED spread has ever been, and that’s a very good thing, because it means global financial markets are in very good shape.
Chart #2 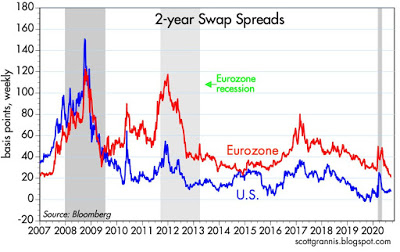 Swap spreads are the extra yield that investors require to enter into a swap agreement with a major broker-dealer or financial institution. Swap agreements involve one party paying, for example, a fixed rate to another party and accepting a floating rate in return. Swap transactions effectively allow investors and financial institutions to efficiently manage their risk. You can find a longer explanation of swap spreads here.
Chart #2 looks at 2-yr swap spreads, which is the extra yield that one party requires in order to enter into an agreement in which the investor receives a floating yield in exchange for paying a fixed, 2-yr yield. 2-yr swaps represent a highly liquid market and are thus an excellent proxy not only for the health of financial markets but also the general liquidity conditions of financial markets (a high degree of liquidity leads to very low spreads). Current swap spreads in the US are very low, while spreads in the Eurozone have clearly moved into “healthy” territory after spending many years in not-so-healthy territory.
Bottom line: swap spreads tell us that global financial markets are in very good shape, and that can often be a good predictor of future economic health. They also tells us that central banks for the most part are not a threat to the markets or the economy. No one is being starved for liquidity, and real interest rates (and thus borrowing costs) are extremely low. Note also that this predictive ability of swap spreads can be seen in Chart #2, as swap spreads rose in advance of the 2008 recession and fell in advance of the recovery.
Chart #3 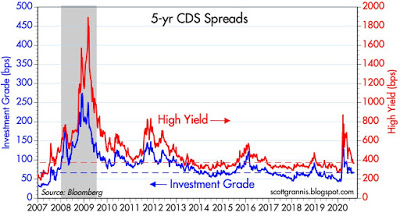 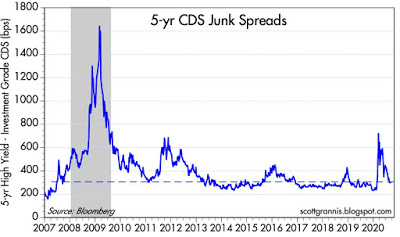 Chart #3 shows 5-yr Credit Default Swap spreads. CDS spreads are a very liquid market that gives a good proxy for 5-yr corporate credit risk. Spreads are trading at pretty low levels, suggesting that credit risk is minimal, and by extension, that investors perceive the outlook for the economy to be healthy. Chart #4 shows the difference between investment grade and high yield CDS spreads, something that is called the “junk spread.” This too is a good proxy for the extra risk an investor experiences as he or she ventures into the junk bond arena. 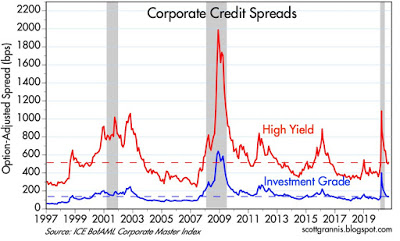 Chart #5 is an amalgamation of the credit spreads on two classes of corporate bonds of all maturities—and there are many. Here again we see that spreads are generally low, thus the implied outlook for the economy is healthy. Investors are not overly concerned about the outlook for corporate profits.
Chart #6 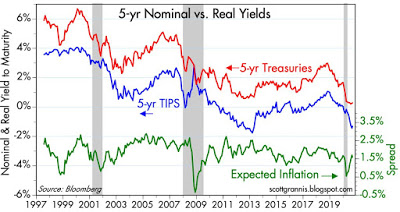 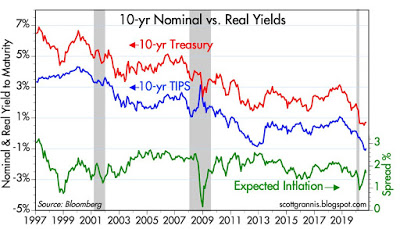 Charts #6 and #7 show the spreads between nominal and real yields on Treasuries and TIPS (TIPS = Treasury Inflation Protected Securities). This difference, or spread, is equivalent to the market’s expectation for future annual inflation rates. In both cases, it appears the market is expecting consumer price inflation to average just over 1.5% per year for the foreseeable future. If this proves to be an accurate forecast I—and most people—will be happy. I worry, however, that the Fed wants the inflation rate to be higher, and I’ve learned to never doubt the Fed’s ability to get what it wants.
It’s important to realize that most people’s understanding of how inflation works is faulty. Inflation is not a by-product of strong growth or strong demand. Inflation happens when there is more money in the system than people want to hold. Inflation lies in the intersection of a central bank’s willingness to supply money and the public’s desire to willingly hold that money. Too much money is what leads to inflation. There is certainly plenty of money these days, as I have documented in prior posts. What is keeping inflation in check is the apparent fact that the public is happy to hold all that money, because there are still many things to worry about and money provides security.
What we need to be attentive to is the return of confidence, since that will act to reduce the demand for money. And if the Fed doesn’t react to this by increasing short-term rates in a timely fashion, we will end up with higher-than-expected inflation and eventually much higher interest rates as the Fed is forced to tighten monetary conditions. This is how almost every recession (except this year’s) has started, by the way, so it’s not a pleasant prospect. Fortunately I don’t see this happening any time soon, but next year is still out there on the horizon….