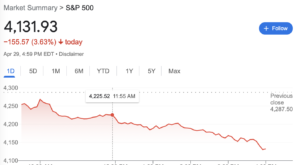 Quickly, without looking, guess what has happened to the S&P 500 in the last 5 years.

Ok, now check to see how close your guess is. In the last 5 years, the S&P 500 has risen by 72.21%. Does that surprise you? It did me. That amounts to an annual growth rate of 11.5 percent (not inflation adjusted.) Since inflation was low for almost 4 of those 5 years, it’s still a healthy rate of return. The Consumer Price Index has risen by 17.3 percent over that time. That means that the S&P 500 index has risen, in real terms, by 46.8 percent over the last 5 years. That’s an annual growth rate, in real terms, of 8.0 percent. Not bad.

Confession: I should know, but don’t, whether the S&P 500 is based on reinvesting all dividends. If it is, then end of story. If it is not (and I suspect that it’s not), the rates of return are even higher.

Why do things look so bad now? Because April and, indeed, the first 4 months of 2022, have been horrible for stocks. Since the start of the year, it has fallen by 13.86 percent.

But I learned decades ago, mainly by reading both the popular and the academic literature on finance, not to time the stock market. I’m in it for the long run. Former co-blogger Bryan Caplan learned that the hard way between March and June 2020. That one bad bet caused losses an order of magnitude larger than all his gains from all his explicit bets with individuals.

One of the most valuable articles published in David R. Henderson, ed., The Concise Encyclopedia of Economics is the one titled “Stock Market.” In it, author Jeremy Siegel, a finance professor at Wharton, shows that stocks have outperformed bonds, gold, and commodities by large margins over long periods.