Inflation is near a 40-year high — and that just might mean it’s a good time to buy stocks.

At least, that’s according to an analysis from The Leuthold Group, which looked at market performance since 1945 and found that when inflation is high, stocks tend to perform well right after the inflation rate peaks.

Inflation rose again in April, with the consumer price index (CPI), which broadly measures the prices of goods and services, increasing 8.3% from a year ago, the Labor Department reported Wednesday. While the number was slightly higher than economists’ projected 8.1% rise, it still shows inflation eased slightly in April from the month before.

But have we reached peak inflation? The latest inflation data makes it hard to say.

“We’re going to need to get — as we go forward here — a month that convinces us that we’ve really turned a corner,” says Jim Paulsen, chief investment officer at The Leuthold Group and author of the report. “We didn’t get that this morning… but that doesn’t mean that we can’t get it next month or the month after.”

What does the data say?

When inflation is lower, between 2% and 4%, changes to the inflation rate don’t have too much of an impact on stocks, according to Paulsen’s analysis of the data. But the market becomes much more sensitive to inflation once the annual inflation rate jumps above 4%.

“Even if inflation stays high for a while, if it just stops accelerating that’s typically been a really good thing for stocks,” Paulsen says.

When the rate is 8% or above, the measure Paulsen used to assess the S&P 500 performance showed stocks do well for the next year when inflation began to decelerate. But it showed poor stock performance when inflation continued to climb.

Why do stocks do well when inflation reaches a peak?

When inflation is high, the Federal Reserve tends to raise short-term interest rates because higher interest rates makes it harder for businesses and consumers to borrow and spend money, which can help slow demand and battle rising prices. But it can also crimp prices for financial assets, like stocks and cryptocurrency — and that can make investors fearful. We’ve seen ample investor concern as the Fed hikes interest rates, evidenced by recent market volatility.

When inflation is really low, investors tend to worry about a weakening economy and what that means for companies’ earnings and stock prices. As the inflation rates accelerate, stocks can do better, but then it doesn’t take long before rising inflation becomes negative for the stock market, Paulsen says.

That’s part of the reason the inflation rate’s peak is so important to investors, he adds. When inflation rises, investors are more pessimistic and want to keep their money on the sidelines. Stock prices fall on these concerns, and when inflation moderates you have a buying opportunity. The influx of cash buoys stock prices back up.

It’s rare to have inflation this high, which means we may be near that peak that could be a good buying opportunity, Paulsen says.

In late April, Ryan Detrick chief market strategist at LPL Financial, pointed to three reasons why the inflation rate could be near its top.

First, the price of used cars is dropping. Because a chip shortage made getting new cars so hard, the price of used cars has soared during the pandemic. But in the last couple of months those prices have fallen — and because used cars and trucks make up about 4% of the Consumer Price Index (CPI), this could hint that inflation is nearing a peak. And while it’s too early to say for sure, Wednesday’s inflation numbers might support that conclusion.

Finally, the major backlog seen at ports like those in Los Angeles and Long Beach are thawing and shipping prices are down. While there’s still a long way for them to fall, this is “another very positive clue that inflation could be nearing a major peak,” Detrick wrote. (Of course, the problem is always in flux, and COVID-19-related lockdowns in China are still causing port issues around the world.)

In a research note published Sunday, analysts at Raymond James highlighted some data points that they say could also indicate inflation decelerating, including a slowdown in wage growth.

“We suspect the economy is seeing a rapid increase in labor participation post-Omicron, permanent school openings, and recent changes in goods purchases to services, which is likely to severely loosen labor conditions across the goods economy,” the analysts wrote.

Other factors the analysts pointed out include that economically-sensitive commodities like copper are dropping in price and inventory levels are improving.

“We can only hope the Fed is looking at a lot of the forward indicators that we are seeing and drawing similar conclusions,” the analysts concluded.

To celebrate our 50th anniversary, we’ve combed through decades of our print magazines to find hidden gems, fascinating stories and vintage personal finance tips that have withstood the test of time. Dive into the archives with us.

The Fed Is Hiking Interest Rates. Should That Change Your Investment Strategy? 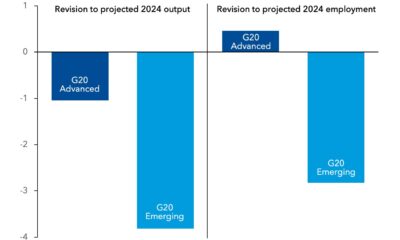