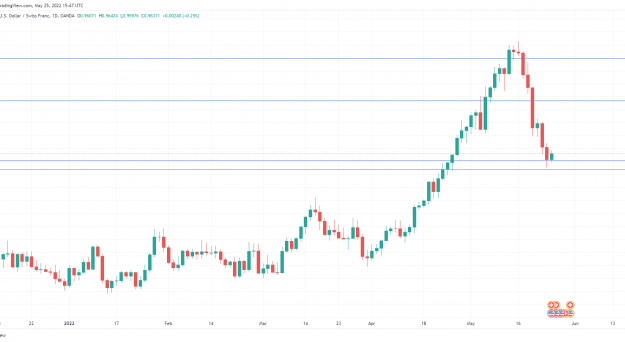 Swiss banks are traditionally known for avoiding publicity, and the same can be said for the Swiss franc, which is usually fairly steady and doesn’t make the headlines. Earlier this month, however, the Swissie hit a milestone, as it achieved parity with the US dollar, the first time that’s happened since December 2019.

The Swiss franc was steamrolled by the US dollar in April, as USD/CHF surged by 5.48%, its best one-month performance since May 2012. The dollar extended its gains and pushed above parity in mid-May, but the Swiss franc has since battled back and is currently trading around the 96 level.

Why did the Swiss franc slide so quickly? One key reason is the newfound hawkishness of the Federal Reserve, which embarked on an aggressive rate-hike cycle in order to rein in soaring inflation. The Swiss National Bank, mindful of the attractiveness of the Swiss currency, has pegged its main interest rate at -0.75%, the lowest of any major central bank. With the Fed raising rates, the US/Swiss rate differential has been widening, with the Swiss franc taking a tumble as a result.

The winds have changed in the last week or so, as fears of a recession in the United States have pushed the US dollar broadly lower, and the Swiss franc has jumped on the bandwagon and gained ground. The SNB generally favours a weak Swiss franc in order to boost Switzerland’s export sector and is not shy about intervening in the currency markets when it feels that the Swiss franc is too highly valued. However, with inflation accelerating just about everywhere worldwide, the SNB may allow the Swissie to continue to strengthen in order to combat inflation. Any intervention by the SNB is most unlikely, even if the Swiss franc continues to improve.

All eyes are on the FOMC meeting later today, and an unnerved market will be looking for a warm hug and an encouraging message from the Fed. Investors are worried about a recession, which could be exacerbated by sharp rate hikes. Interest rate expectations have been scaled back slightly, and the rate statement could be a market-mover for the US dollar. The Fed remains committed to curbing inflation and is expected to deliver supersize 50-bps hikes at the June and July meetings.